Whizzing past public process: Will Kaiser Woods become a playground for mountain bikers?

“Developments never die. They just come back in another form.”   Andy McMillan

In March I received a postcard from the Olympia Parks and Recreation Department announcing its plan to develop the 68.67 acre forested natural area above our neighborhood as a “dedicated mountain bike park.”

This is how many Westbrook Park neighbors first learned that the site we had worked hard for six years to protect from three housing projects had already been repurposed. Like many of them, I felt as if I had been gut-punched. OPARD had renamed Park Heights “Kaiser Woods.” This meant that many neighbors most directly affected didn’t realize the postcard referred to the beloved park at the top of the dead-end main road in their own neighborhood.

The notice invited recipients to visit engageolympia.org to view the results of a feasibility study that had already been performed and to fill out a survey with feedback.

As residents within 600 feet of the property, we were the most affected stakeholders. But we had been left out of the planning process while a coalition of mountain biking organizations had been working with OPARD staff for at least two years to plan the park’s new designation.

A lack of transparency

The morning after the notice arrived, I called OPARD Assistant Director Johnathon Turlove with concerns about the park and that the process had excluded neighboring stakeholders. I noted the survey had a short time frame for response, could be filled out multiple times by one individual, and was tailored to bikers.  After first refusing, Turlove eventually agreed to extend the survey deadline and allow a public meeting.

Concerned neighbors and environmentalists came to the meeting with a list of questions about the plan but they were outnumbered 10 to 1 by bike park supporters. When a Westbrook Park resident attempted to ask a question, she was told that only questions about OPARD’s presentation would be entertained.

Looking beneath the surface

I decided to look through the files of Andy McMillan, one of the original visionaries who proposed Kaiser Woods be designated as a neighborhood, open space park with hiking and biking trails.  To understand the implications of the City’s plan, I studied Andy’s copies of developer plats, hydrology reports, a traffic study and his notes and correspondence.  I discussed the plan with people in the park.  I conducted interviews with mountain bikers, hikers, Westbrook Park and Ken Lake neighbors, environmentalists, state agency specialists, OPARD staff, staff at the Department of Natural Resources-Capitol Forest (where there are 166 miles of biking trails for all skill levels), park planners from other mountain bike parks in the state, and the resource manager of Manke Timberland, which owns 800 acres right next to Kaiser Woods and contains numerous intermediate and advanced trails for bikers.

I discovered that OPARD had inaccurately scored “Kaiser Woods” on three key criteria in  feasibility studies and site plans it conducted for four parks  — Watershed Park, Fraser Trails, Kaiser Woods and LBA Woods.  This had the effect of pushing Kaiser Woods to the top of the list as the preferred site for off-road mountain biking.

Over a six week period I uncovered other serious questions about the plan. The 2018 feasibility study for the project, for example, had overlooked the two wetlands and two streams on the site. The private mountain biking advocacy group, Evergreen Mountain Bike Alliance (hired to produce three plans for the park) didn’t address them in their designs, despite having spent many hours studying the site.

When I alerted OPARD staff about the wetlands and streams, they said they were moving forward anyway and could “mitigate for the wetlands later.”

But, according to the Washington State Department of Ecology website, the first step of the state’s mitigation sequence is to avoid the wet areas in the first place.

“Nothing going on here…”

The deeper I dug, the clearer it became that OPARD’s decision rested on no rationale other than enthusiastic support from three local mountain biking organizations named specifically as the key stakeholders in the new plan:  Friends of Capitol Forest, South Sound Mountain Biking Alliance and Evergreen Mountain Bike Alliance.  The City’s plan is for volunteers from these groups to design, build and maintain the park.

Meanwhile, Westbrook Park and Ken Lake residents inquiring about the status and timeframe for the park’s development were told repeatedly that nothing was likely to happen at the park anytime soon and that their desire to be involved in the planning process was “premature.”

Other key people and groups were aligned with the mountain biking park advocates, including two law firms and two state agency staffers who claimed “conflict of interest” and/or refused to pursue concerns about impacts on wildlife and possible misuse of the grant monies, the latter acknowledging they are bikers who support the park’s creation.

The Ken Lake Homeowner Association board also decided to remain “neutral,” despite the increased risks to their residents of flooding, waterborne illness, sedimentation, changing water levels and toxic algal bloom in the lake if Kaiser Woods becomes a mountain bike park. Several Ken Lake residents reported that communications about the park were not relayed to them.

The culture of mountain biking

Mountain bikers are a diverse group, but one with its own ethics, language, beliefs and practices.  Some describe their sport as high risk, thrill-seeking, expansionist (to acquire more trails) and addictive.  Many bikers wear protective gear such as a full face mask and body armor.  Mountain bike parks post signs to warn other users that they should enter the park only “at their own risk.” 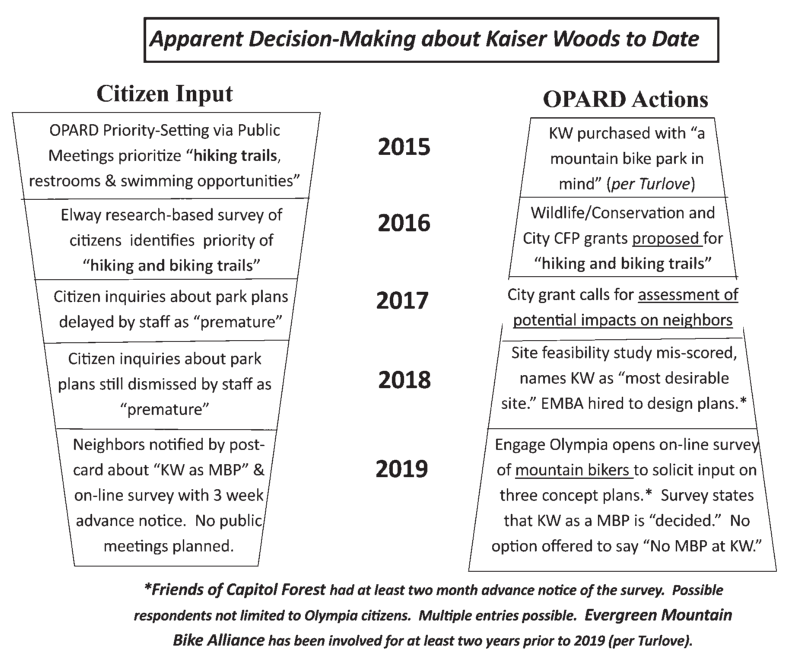 Some bikers are environmental stewards, but the state’s largest mountain biking advocacy group says their mission is to acquire as much public land as possible for new trails while simultaneously focusing on “sustainable recreation, trail maintenance, advocacy, education, volunteerism and trail building.” As one advanced biker said about biking on clear-cut land: “We’re here for the trails, not the trees.”

Because bikers move faster than hikers and the risk of collisions with pedestrians is high; bikers have the right of way in mountain biking parks.  Many bikers exercise caution around hikers but also expect people to get out of their way.  Quickly.

Like mountain bikers themselves, the decision-making process for Kaiser Woods has moved fast, seems to have appeared out of nowhere and expects other stakeholders to get out of the way.  Bike park advocates kept their planning with OPARD staff secret even from their own members, announcing on their website only two months before the City publicized their plans.

OPARD staff kept the secret as well.  At least two long-time Kaiser Woods park stewards were outraged when the decision was unveiled at the same time as the flawed feasibility results along with a survey that would skew results and inflate “vote” counts giving a false picture of public support for the plan.  “We were lied to,” says Dave Stevenson, Westbrook Park resident.

An on-line survey revealed the disconnect between what bikers want and what’s possible at Kaiser Woods.  Bikers named campgrounds; a shelter and restrooms for camps by Evergreen Mountain Bike Alliance; showers for bikers and their bikes; dual biking trails; electrical plug-ins for food trucks; an equipped tool shed for bike repairs; a safe spot to take a break; a clear-cut space for the Medivac helicopter to land; and “the fewer rules, the better.”

Has anyone noted there is currently no water or electric power at Kaiser Woods?  Does the City plan to add these utilities?  At what – and whose – expense?  The plan mentions using volunteer labor.  If this labor pool is untrained or unvetted, development could compromise the park environment and worsen flooding in the neighborhoods below it.   The quiet, personal safety, security, property values and traffic safety of Westbrook Park (already a problem on Park Drive’s four blind curves) will be negatively affected if the neighborhood becomes a thoroughfare and overflow parking lot for large biker work parties and meets.

Environmental and other concerns

Some mountain bikers are vocal about the disturbing trend of damaging the environment with aggressive, irresponsible biking and leaving trash and human waste on trails. Research on environmental impacts of mountain biking reveals many reasons for concern about the fragile Kaiser Woods site, which has shallow soils over fractured basalt rock.

One of the stated reasons for turning Kaiser Woods into a mountain bike part is that it provides access to Manke Timberland trails. These are on land that could be foreclosed at any time and sold to become the site for a large multi-sports park (which would itself include extensive mountain biking and running trails). If the Manke land is sold to developers, the Kaiser Woods property may be needed as a natural space buffer between that facility and the neighborhoods below it, an impossibility if it already has been developed as a mountain bike facility.

From hiking and open space to exclusive high-risk recreation?

Olympians voiced their park priorities in a 2016 OPARD process that identified participants’ preference for “neighborhood parks, open space, preservation of wetlands, walking paths and restrooms.”  The current plan ignores these priorities, will have serious impacts on park neighbors, and is unrealistic, environmentally destructive, socially irresponsible and short-sighted.   As one online survey respondent commented, mountain bikers’ desire for a park within city limits “skates dangerously close to privatization of public land.”

We may look back some day and regret allowing over-development of Kaiser Woods for one user group, instead of retaining it as a low-impact, neighborhood park with some hiking and biking trails—which also would honor the legacy of Andy McMillan.

This genie should be called back into the bottle by its master — the citizenry of Olympia.

Evonne Hedgepeth, Ph.D. is a long-time resident of Westbrook Park and widow of Andy McMillan, a wetlands biologist who led the neighborhood’s fight to defeat developments at Kaiser Woods from 2006-2012.  Not long after he died in 2014, the City moved towards fulfilling Andy’s wish to have the site developed as a park by purchasing it for that purpose