The League of Women Voters of
Thurston County wants you to know! 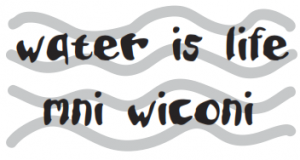 Imagine a container with a paper coffee filter inserted at the top. Say the filter represents the bed of a stream and the water you pour into the container is rain adding to groundwater. You can pour almost a full glass of water before you’ll reach the level of the filter.

The same relationship exists between rain, groundwater and streamflow. Unless the acquifer—the groundwater—is at a healthy level, streams can diminish to a trickle or even dry up. And even though the South Sound often seems to be a watery paradise, our streams are in danger of going dry.

That’s why the League of Women Voters of Thurston County, together with The Olympian, is presenting a series of public forums on water policy concerns in Thurston County. The series is entitled “Where’s the Water?” The information derived in the forums will contribute to an update of the League’s 2008 study, Thurston County Water Realities in Relation to Planned Development.

A new life for the Nisqually

The inaugural forum on February 5 will feature Kevin Hansen, hydrogeologist for Thurston County, speaking about the relationship of ground water to streamflows and David Troutt, Natural Resources Director for the Nisqually Indian Tribe, who will speak about the Nisqually River and Estuary and the proposal to create a causeway where I-5 now crosses the Nisqually to allow it to flow unimpeded to Puget Sound. A recent editorial in The Olympian supported this proposal (see link below). The inaugural forum will be followed by four meetings to explore specific water issues facing the county. 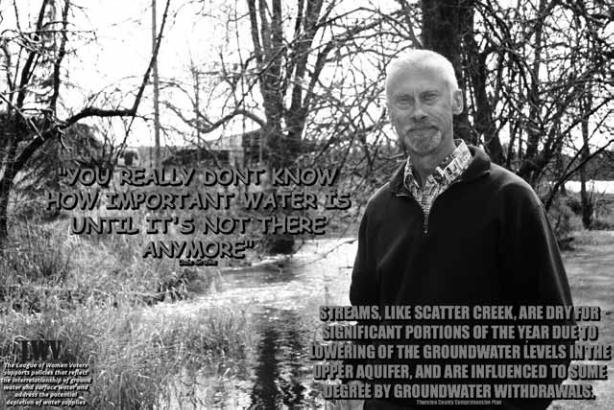 Rural development was shut down when the State Supreme Court issued a decision (“Hirst”) that required counties to ensure the presence of sufficient water before issuing permits for new exempt wells.

The legislature responded with a law (ESSB 6091) that allowed developers to continue to drill exempt wells while counties developed plans for designated “Water Resource Inventory Areas” (WRIAs) to offset the impacts of such wells.

Maia Bellon of the Department of Ecology will describe the Hirst decision and its ramifications, and Marc Daily, Executive Director of Thurston Regional Planning Council, will discuss how the new law affects development in Thurston County.

As can be seen in the analogy that begins this article, many wells pulling water from the same area can keep the water level of an aquifer below that needed for minimum streamflow. The smaller the stream, the more significant the effect. Some wells can continue to pump water from the ground long after a stream runs dry.

Consider that most water consumption is used outside in summer when streams are already running low. Consider also that 80% of the water used outside the home for irrigation is lost to evaporation compared to only 10% loss of water used indoors that drains into a home septic system. Though the new law has no requirement to address climate change, its projected effects will only exacerbate our water woes as summers become more dry and the winter rainy season becomes shorter and more intense, so that aquifers do not fully recharge.

ESSB 6091’s criteria for an acceptable project to mitigate the effect of future permit-exempt wells on streamflows rests on the concept of “net ecological benefit” (NEB). Ideally, mitigation would replace water from the same stream at the same time of year. However, Ecology’s definition of a NEB is quite broad. It would allow mitigation to occur anywhere in the same sub-basin of the watershed. Projects that are most beneficial to fish would get higher priority, though there are no specifics on actually monitoring the net benefits of a project after it is completed.

So far, WRIA 11, the Nisqually watershed, has completed its plan. George Walter, Environmental Program Supervisor for the Nisqually Indian Tribe will speak on the history of the Nisqually River and will describe the Nisqually Watershed plan. The proposed projects now await Department of Ecology approval and subsequent approval of funds to implement them. The State has allocated just $20 million per year for water projects to enhance stream flows across the entire state. WRIA 11 will be competing for these funds with projects in other watersheds.

The other Thurston County WRIAs, encompassing the Deschutes, Chehalis and Kennedy/Goldsboro watersheds, are at the beginning stages of the process and have until 2021 to complete their plans.

Another forum, to be held in Yelm, will focus on rural communities and the challenges to, along with solutions for, their water issues.

Representatives from the Thurston Conservation District will talk about strategies residents can use to conserve water and help recharge aquifers. Without a recharged aquifer, residential development, agriculture and stream life will all suffer. Agriculture, as a major consumer of water in the summer months when water is scarce, has the ability to help preserve our watershed through efficient methods of irrigation. The Conservation District continues to work with farmers to help them make the best use of their natural resources through its Voluntary Stewardship Program.

Information will also be available from Nutriculture Northwest about the use of biochar as a fertilizer and soil enhancer, as well as a means to conserve water. A Department of Ecology soil scientist said, “Biochar is one of the most significant and game-changing solutions we have for stabilizing carbon in soil and realizing the agricultural benefits of fertilizer use efficiency and moisture retention.” Its use by gardeners and farmers would help enrich our soil to grow nutrient dense food, sequester carbon, transform organic waste to fertilizer and conserve water.

The League encourages members of the public to attend any or all of the forums – watch for details of time and place in WIP and elsewhere. Growing demand for water puts pressure on our resources and poses challenges that need the understanding and participation of all of us. Refresh yourself and your knowledge — get the information you’ll need to have a voice in decisions about our environment.