Once you’ve walked the streets of your neighborhood more times than you can count, there are two trails on Olympia’s westside where you discover the magical shelter of the West Bay Woods. The West Bay Woods is a special kind of park, on land purchased to protect and restore habitat for the Pacific Great Blue Heron. It provides a corridor for other wildlife within the urban landscape—and a connection for us humans to a neglected side of our nature.

Within the woods, there are large areas that are still forested with 100-year-old Douglas-fir trees, Western red cedar, and big-leaf maple that provide habitat for Pacific great blue herons, bald eagles, cooper’s hawks, owls, falcons and others. Below the tree canopy, many other species of wildlife use the forest, including mountain beaver, coyote, red fox, Northwest salamander, Pacific tree frog, Puget Sound garter snake, and a robust population of black tailed deer.

One trailhead is at the end of Hays Avenue NW. This entrance features a rain garden which helps drain and filter stormwater before it enters the marine waters below. The second is where Dickinson Street dead ends. This accesses the heronry with the trail is open to hikers from September through January. This area is closed during nesting season, which is February to August each year.

West Bay Woods is the creation of OlyEcosystems, a coalition of concerned citizens formed in 2014 to 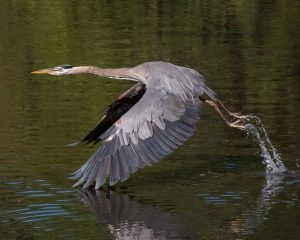 preserve 3.5 acres of heron nesting ground. Since then the nonprofit has acquired another 15 acres of land that weaves around houses, condominiums and business complexes above West Bay Drive.

In the works are plans to create additional entrances to the woods from parcels recently purchased along West Bay Drive. The woods is a remnant of shoreline forest that sits above the southern estuarine portion of Budd Inlet in South Puget Sound. These woods have seen various uses over the past 200 years that have left them marked, changed and degraded.

Persistent water quality issues in Budd Inlet and the long-term impacts of the now derelict, post-industrial West Bay shoreline have left the woods all but cut off ecologically from Puget Sound—but not quite. Yet the West Bay Woods are starting to tell a story of restoration and recovery.

There are wetlands and seasonal streams in the West Bay Woods, in addition to the permanent West Bay Creek. These features, as well as the steep forested slopes, if managed appropriately, provide an extremely valuable stormwater service by filtering polluted surface water from the neighboring urban areas before it reaches the Puget Sound. This is of heightened importance due to its proximity to Budd Inlet, where native salmonids, orcas, seals, shore birds and hundreds of other marine species live.

The diversity of wildlife habitat along this shoreline area gives a glimpse of what was once here at a much grander scale. The area is an interconnected and sensitive network of environments that are dependent on each other for healthy ecological function. The vast majority of these woods have now been protected by the Olympia Coalition for Ecosystems Preservation.

Ongoing restoration work in partnership with the community is focused on enhancing this important remnant of the larger historic habitat for both wildlife and generations of people to come.

OlyEcosystems is a volunteer-run, community-based urban conservation and advocacy group in Olympia, Washington. Their focus is the urban shoreline and associated watersheds in Olympia,. driven by an understanding of the intrinsic value of all creatures in our ecosystem. They are united in believing in the value of biodiversity and that the community is enriched and defined by a relationship to the wilderness in our midst. This article was adapted from Oly Ecosystems.