It might seem from news stories that the biggest “threat” to free speech today comes from intolerant students—both those who shout down speakers promoting white supremacy, and those who disrupt presenters arguing for Palestinians. In fact, there are few such incidents, though those are extensively reported, especially by the right-wing media. (Data do show another threat to free speech: schools dismiss faculty for “political speech” and most often it’s for “liberal” or “left” speech). 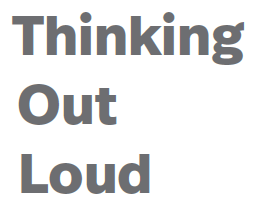 They use the corporate treasuries (other peoples’ money) and their fortunes to spread this gospel of the marketplace and money as the measure of all things. They funded think tanks, academic departments and researchers to denigrate public institutions and paint government as the enemy. We learned not to trust public services, schools, transportation systems, government agencies, and more—obliging us to welcome their replacement by private companies run by those multimillionaire CEOs.

They moved into the political realm, selecting and supporting willing individuals to run for positions in local, state and federal government where they would make the law. Those people in turn appoint people to courts to interpret the law.

Once this was accomplished, corporations went to court to contest laws that might impede their pursuit of power. In 1974, the Supreme Court ruled against limiting contributions by individuals to campaigns and candidates because the “unfettered interchange of ideas [was necessary] for bringing about political and social changes desired by the people.”

In the following years, the justices struck down laws that would have limited spending by independent groups, by the candidate of his or her own money and any limit on total expenditures during an election cycle. By 2010 and 2014 the justices remembered that corporations were persons and they could spend as much as they liked on elections as long as they didn’t give directly to a candidate (that might seem like bribery).

It was as if the justices read the First Amendment to say, “Congress shall make no laws abridging paid speech.”

The justices reasoned that any restriction on spending for political communication “necessarily reduces the quantity of expression.” Supporters of the ruling went further: “to speak effectively, people have to spend money — on things like paper and pencils, signs, computers, printing presses, and broadcast facilities.” (Steve Simpson in The Hill, Sept. 2016)

That says it all: to speak effectively people have to spend money. Which is to say, those who have unlimited amounts of money to spend will be able to indulge in unlimited political communication. That consigns 99% of the people to things like paper and pencils, shouting on the street corner—drowned out on the internet by “content creators,” on the airwaves by ad agencies, and on other avenues by paid consultants.

Courts have ruled that money in political campaigns may involve speech alone, conduct alone, or a mixture of speech and conduct—and since all of these involve communication all are protected under the First Amendment.

But is other communication and conduct similarly protected?. Congress and state legislatures have adopted gag orders and other measures that constrain actual political speech. Some give corporations the right to burden speech: 13 states let food manufacturers sue anyone who disparages their products.

Journalists who have written accurately about activities our government wishes to hide from the public have been imprisoned: Julian Assange, indicted by the US and threatened with 175 years in prison is only the most famous. On page 10 of this issue there is an example of further erosion of the right accorded actual communication. The federal government used its “terrorist” list to label a man criminal for filming someone in the political act of shutting an oil pipeline valve.

April 2020: Will convenience destroy us? “A new way to enjoy cheese without dealing with the rind.” Carrots peeled and sized; salads washed, tossed and bagged. A new smart technology to run our appliances. Keurig pods that speed up coffee making. What do we give up in the name of convenience, of saving time? Send your submission to olywip@gmail.com by March 18.

June 2020:  Unintended consequences. There are certainly unintended con- sequences to actions small and large, but maybe some of those consequences are predictable. Write about your experiences and exposure to these and send the result to olywip@gmail.com by May 13.

Picture of model by Qsimple, Memories for the Future Photography.  Available under Creative Commons license.  Composite created by Paul Peck.

$500 courtesy of John Roberts, Jr., Antonin Scalia, Anthony Kennedy, Clarence Thomas and Samuel Alito — $100 each. Thanks to Citizens United, the 2020 campaign is shaping up to be a bonanza, with estimates that those with deep pockets will spend nearly $7 billion on paid advertising. 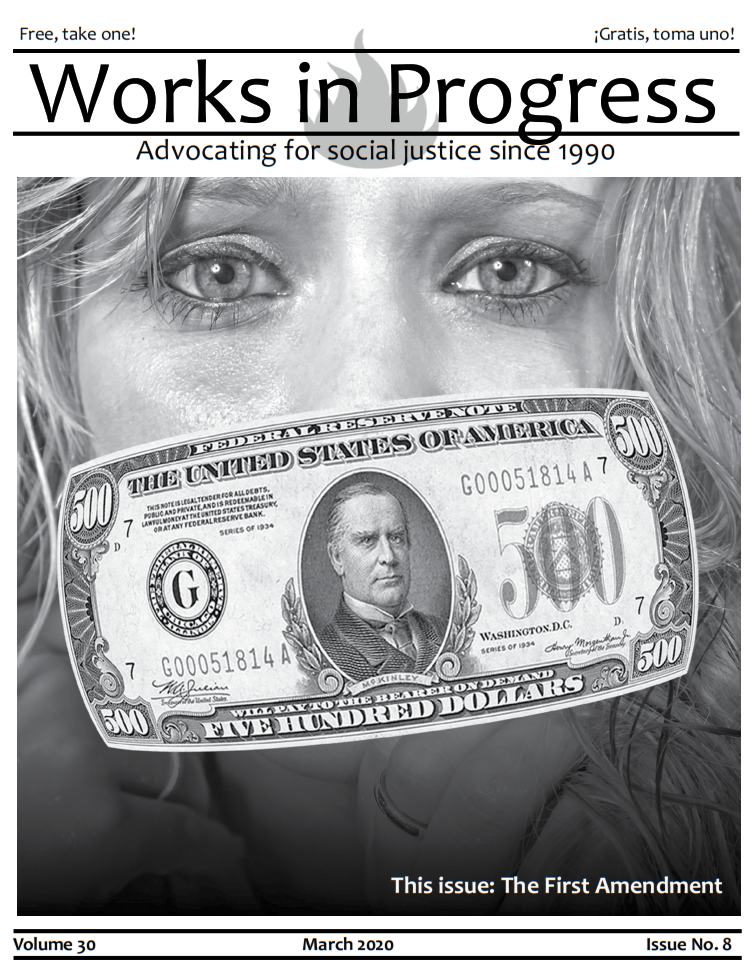 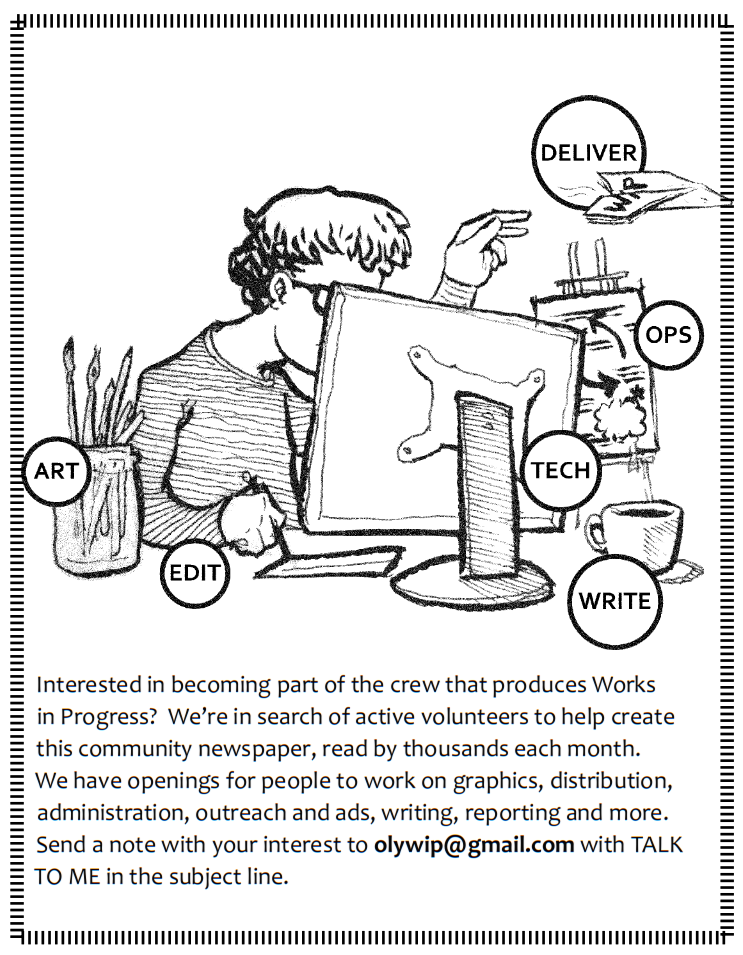