Ditch the car! Get on the bus and go

In January people in Lacey, Olympia, Tumwater and Yelm suddenly found boarding the city bus a pleasure! No fumbling for exact change, counting out pennies, searching for a pass, stuffing wrinkled dollar bills into a resisting slot: riding the bus is free!

The new zero-fare policy is already showing how significant a barrier fares were for people who might otherwise have taken a bus instead of a car (or walking). According to boarding figures for January, as many as 60,000 car trips might have been eliminated. That’s a lot of traffic! That’s a lot of fossil fuel exhaust! And if you think of the savings in fares—that’s a lot of money left in pockets!

Based on the experience of other communities who tried zero fare, IT estimates there could be as much as a 60% increase in ridership. They’re pleased with the overall 19.8% in the first month as a good start. And look at that nearly 50% increase in weekend riders: IT had heard during its outreach that people were giving up shifts working on the weekend because they didn’t have transportation. As a result, IT changed the weekend span of service (starting earlier and ending later) to mimic weekday runs. Based on these January figures it’s already making a difference to people.

Ridership is only one measure of success of the new policy. Another factor IT will look at is speed—whether by not collecting fares it allows the bus to move more quickly. They’re also looking at ease of use/removal of barriers as a factor. Hearing from riders about how elimination of fares has changed their travel habits will contribute to their ability to evaluate the project.

Our fare-free rides come thanks to a 5-year demonstration project, developed after voters passed a sales tax increase in November 2018. Checking in with voters over the next year, IT found that people wanted a public transportation system that could get them where they needed to go faster and easier. They also wanted IT to address population growth, congestion and generally improve livability in the community. 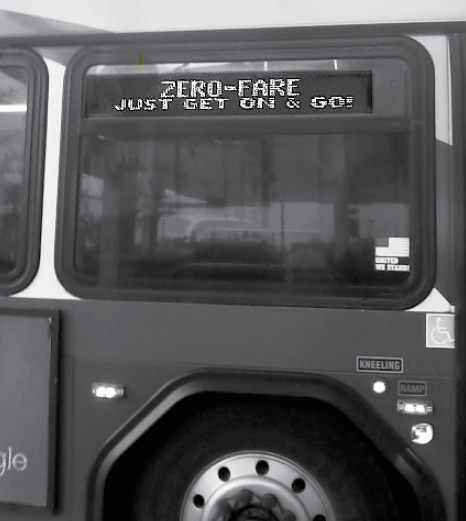 Most of the funding for public transportation—like the funding for streets, roads and highways—comes from federal, state and local government. Fares in past years made up only about 10% of the system’s budget.

The zero-fare approach allows IT to pursue all of the desires outlined in their outreach to people without having to spend taxpayer dollars investing in capital and operating costs for a fare-collection system. As stated by an IT official, “Other systems are spending dollars administering low income fare programs while some spend scarce dollars on fare enforcement. We decided that a zero-fare approach would be a better fit for our community.”

So many reasons to take the bus

The IT Board could choose to end the demonstration project before 5 years is up. Over the next few months and years, they will be tracking how well it’s working. They’re expecting that we as a community will take advantage of this opportunity.

Take the bus—it’s ours: a publicly owned system run by local board members! Respect the ride, take good care of our union operators, our equipment—and each other. That way we’ll all get where we all need to go quickly, safely and efficiently. And have a conversation with fellow riders—it’s another opportunity that no car can match. And we can keep riding for free for years to come.

Where did Intercity Transit get the funds to eliminate fares? Federal funds for transit dried up for several years, leaving bus systems in the lurch. In 2018, the IT Board determined that they would have to make cuts in service—unless they got new money. They went to voters with a request for a .4% increase in the sales tax. They promised to maintain, improve and even expand service. Voters passed the tax increase by an overwhelming (65%-35%) margin in November 2018. It looks like IT is keeping their word.

Thanks to Ally McPherson at Intercity Transit for helping get answers to questions about the new policy.