Students rally on climate resolution before vote leads to ratification

An urgency to address climate change by a group of tenacious middle and high schoolers was on display July 13 when about 50 people gathered for a rally at the state capitol to share their hopes and fears about life during climate uncertainty, calling listeners to stay engaged in the struggle despite battle fatigue.

Eight student members of Climate Conscious Youth of Olympia (CCYO) and two city council members addressed Olympia’s unfinished readiness plan known as the Climate Inheritance Resolution, an item on the city’s agenda which was slated for vote ten days after the rally on July 23.

In a nightmare scenario echoed by other speakers, Hollen Foster Grahler, a senior at Olympia High School, spoke of staying up late at night, “frantically searching for a solution to the climate crisis,” noting the universal feeling of overwhelm is better served with action.

Riona Keenan-DeVargas agreed, cautioning “we can’t just kick the can down the street and hope someone else deals with it. We are the ones who need to shake the industries, the politicians, the world – awake. We now have the choice to create a planet that we can all be proud of, with clean soil, air, and water, our planet, the perfect home for all life on earth.”

Although the earth’s “case of the humans” is definitely getting worse, Daniel Sherfinsky challenged, we can transform our fear and depression about environmental collapse by remembering our part in “the beautiful worldwide movement” to save it.

The time for debate has passed, said Kaylee Shin. It’s time to pick an issue like climate change, make it personal and “dive deep.” 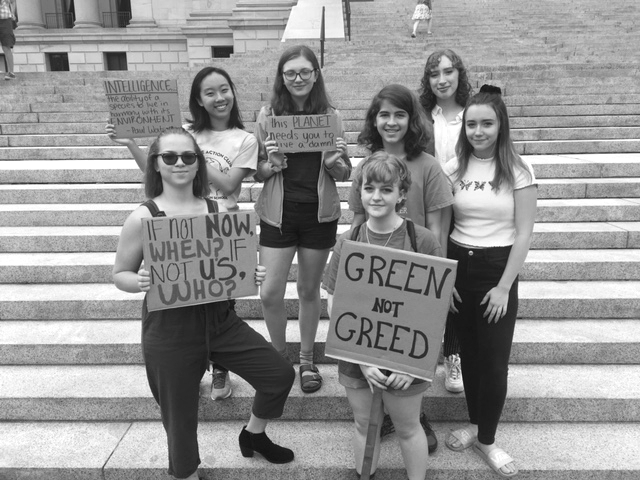 Voicing her appreciation for their young colleagues, city council members Lisa Parshley and Nathanial Jones praised CCYO students for keeping pressure on them the last two years in order to ratify the climate resolution agenda item. After the rally, Parshley recalled meeting with Kaylee Shin and Leah Major (a Reeve’s eighth grader at the time) this spring to modify the resolution to work with existing regional agreements for Lacey and Tumwater.

“Olympia is up there with top cities in what’s already being implemented for climate change. For the most part we do a great job. But we hadn’t moved on the climate resolution. The kids pushed us on it. They took the lead. I mean it when I say these guys inspired me. It took two years but they never gave up and I don’t think it would be coming to a vote if they had.”

Updated at presstime: On July 23, 2019, the Olympia City Council made history by voting to pass the Climate Inheritance Resolution as drafted and proposed by the Olympia High School Climate Action Club. This resolution calls for net zero carbon emissions by 2040, as opposed to the region’s current plan, which calls for an 85% reduction of 2015 levels by 2050. The 85% plan doesn’t offer what has been deemed scientifically necessary to address climate change.

Other student viewpoints expressed at the CCYO rally: