Ending the homeless cycle one life at a time

Stand Up for Kids aims to help Thurston County’s vulnerable youth through a unique approach to support. This entails more than just handing out resources and saying, “God bless you”— not that this isn’t also productive. But much more is needed at this time because the homeless population is under attack.

Stand Up for Kids is a national nonprofit organization with a local chapter here in Olympia existing since 2010. The Olympia chapter was awarded Program of the Year in 2018 by the Olympia City Council and serves all of Thurston County.

Stand Up for Kids works with youth 24 and under. Volunteers for the organization aim to make connections and form relationships with the youth. In this way, they can establish peer counselling with the youth. With these long-lasting relationships in place, Stand Up ensures that the youth is guided and helped every step of the way when they need it. They aim to solve the problem long-term through continued support.

In many counties and cities, it’s considered a crime to camp on public property. Many of these laws are since reversed or remain unenforced due to a recent court ruling in Idaho that such laws are unconstitutional.

However, the issue of stigma remains. At city council meetings, the stereotypes fly out from concerned families, mostly parents that don’t want their children exposed to the assumed dangers, such as violence, substance abuse, and sex trafficking. Some of these dangers do exist—there are a number of these issues within the homeless population—but it’s a smaller amount than most of society thinks and cutting off the homeless population from society is not going to solve the problem.

Generally speaking, these dangers are exaggerated and applied to the homeless population exclusively even though the same problems exist in the housed population. It is essential to address the problem, not the symptoms and to not hide the problem.

Homelessness is a complex issue involving available housing, job security, wages, abuse, and many other factors. Many people attempt to simplify the issue to laziness or unwillingness to work within society, but this is inaccurate. Many homeless people have jobs. Others are refused jobs due to a criminal record or other reasons.

Whatever the case, it’s essential to recognize that Olympia’s economy doesn’t support the State’s minimum wage as a living wage. Expensive housing drives people out of their homes regardless of their employment status. Other times, the person never learned from anyone how to properly take care of their space, and they get evicted. It’s additionally difficult to secure housing when you often need references and a solid credit history, something generally lacking in the homeless population.

The conditions that homeless people face aren’t friendly. While on the streets, people face exposure to disease, sexual and physical assault and more. Many privileged people with homes would claim that those conditions exist because of the climate the homeless population made for themselves. This might be partly true, but blaming the victim never solved anything. Not to mention, several homeless people report harassment from housed people on the grounds that they’re homeless.

These conditions don’t have to be the reality people face. Many organizations in downtown Olympia provide temporary or long-term support and assist in the process of getting homeless people into homes. Mama Dee’s and Crazy Faith provide street meals, Rosie’s Place and the Purple House provide shelter overnight, Interfaith Works is currently working on setting up a site for transitional housing on Martin Way, and the National Runaway Safeline provides a line to call at any time and day for help, counselling and advice.

What happens to people that don’t know how to access these resources or are too embarrassed to accept help? They often find themselves far worse off than the already poor conditions homeless people face. Youth are the least likely to seek these available resources and are thus left in more vulnerable positions than most of the homeless population.

Nina fled to the streets with a history of abusive situations in foster care and later with her abusive biological mother. Although Nina goes through many ups and downs in her life journey, she remains hopeful for what her future holds. Stand Up for Kids is standing right beside her every step of the way.

If you or any youth you know may be in need of services, please feel free to call Stand Up for Kids at (253)331-3490 or message the Olympia chapter’s Facebook page. If you wish to help the homeless population you may donate to Stand Up for Kids online and choose your local chapter.

Ara Morgenstern is a white, queer, and nonbinary student at The Evergreen State College studying writing. They live in Olympia with their cat. 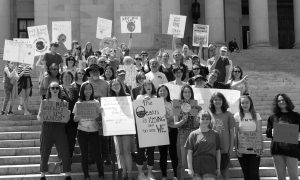