Sanctuary: putting our values into action

On August 29 Temple Beth Hatfiloh, downtown Olympia’s Jewish place of worship, announced its decision to become a sanctuary congregation. Speaking to congregants and community members, Rabbi Seth Goldstein said, “From travel bans to…family separation policies, we as Jews…demand a different reality… we commit to offer up physical sanctuary in the name of immigrant support and advocacy, to support all of our neighbors.”

Steffani Powell, a local immigration attorney, called the decision “a gift to the community,” adding,  “We can all come together and join hands, offering a protective circle around those most harmed by this administration and its policies.”

A sanctuary is a place of refuge or safety. Sanctuary also means a holy place. The federal government considers churches, synagogues and mosques to be “sensitive locations” and will not enter them to arrest someone. (“Sensitive Locations” is traditional practice, not law, and could be reversed at any time). 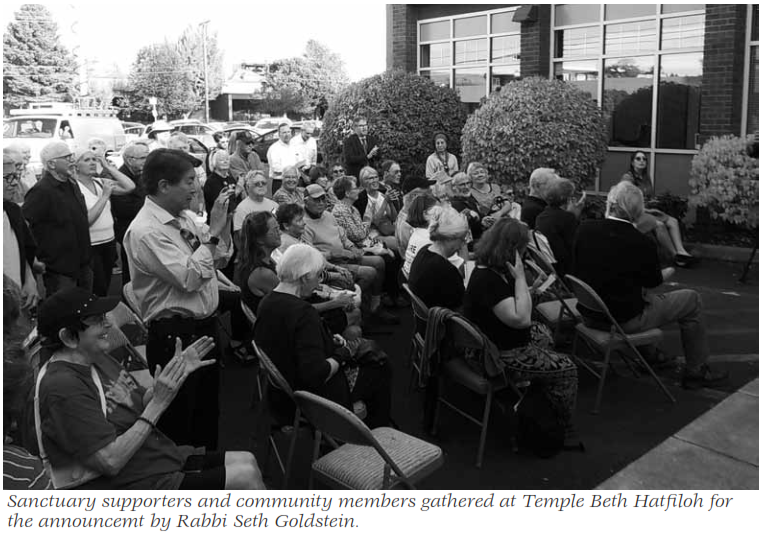 Coming together to create sanctuary in Olympia

In spring 2017, following the lead of our city and its commitment to protect all people regardless of immigration status, a group of congregations came together to create a space of sanctuary. The road we took was not smooth. Our decision was not made lightly, but followed over a year of meetings, questions, and struggles. Just as our group learned from existing sanctuary communities and faith groups, hopefully, others can learn from our story of how this came about.

Representatives of Olympia faith communities came together during meetings of Strengthening Sanctuary, the immigrant rights group formed in December 2016 after Olympia declared itself a sanctuary city. We agreed that providing physical sanctuary was our goal, but each congregation confronted obstacles.

It is a significant commitment to offer sanctuary. There were practical considerations that led many participants to conclude they didn’t have the capacity to house someone for a long period of time. Part of the problem was that we were not official representatives of our congregations, just interested members. No matter how strongly we felt about this issue, we would have to take it back to our congregations for their approval.  This was daunting.

By summer 2017 we realized we needed our own meetings.  There were many issues to discuss and we needed time and space to consider them.  We began meeting at Temple Beth Hatfiloh as the Greater South Sound Interfaith Network for Immigrant and Refugee Support.  Each participant expressed a commitment to work with their own congregation to support the group which chose to become a sanctuary, but most were concerned that their congregation could not take the lead.

Obstacles along the road

Some congregations were already doing important work in the community: sheltering homeless people, providing meeting spaces for community groups, fundraising for those in need, and offering daycare.  There were other considerations—were we putting our congregations at risk? What might be the legal or financial consequences of our actions?

Our group continued to meet, strategize and learn. We reached out to other groups locally and nationally. Michael Ramos from the Church Council of Greater Seattle has been active protecting our immigrant neighbors since the 1980’s.  He spoke with us and inspired us.  Michael advised us to be patient, take our time and not get ahead of ourselves.  This advice turned out to be crucial as we continued our work.  We looked to T’ruah, an organization of rabbis focused on human rights, for guidance. We consulted with Church World Service and learned inspiring stories of congregations which made the decision to become sanctuaries.

By fall 2018 Temple Beth Hatifloh emerged as the most likely possibility.  In spite of our misgivings, those of us from TBH saw ourselves in the plight of today’s refugees and immigrants.  Our history is replete with experiences of being unwanted, vilified strangers, and we remember those who took risks to protect us. Some members have relatives who were sheltered from persecution and death during World War II.  This moral imperative was enough to overcome our fears.

The process was slow, but gradual. As our interfaith meetings continued, we at TBH worked through the concerns voiced by our members and Board, including physical safety, negative community reactions, insurance costs, space, and legal risks.

We developed a proposal, presented it to our congregation, revised it in response to questions, and worked closely with our Board and Rabbi to address their concerns.  After much back and forth and not a little exasperation tempered with patience, our Board endorsed the proposal, and Temple Beth Hatfiloh became a sanctuary.

The benefit we gained from this arduous process is that we are much better prepared.  We have thought through potential problems, and our congregation has participated in the planning and decisions. Many other congregations went through similar processes, and signed letters of agreement.  Sanctuary requires the participation of the larger community, so we are also asking people who are not members of congregations to offer their support. Members of Strengthening Sanctuary and other groups have volunteered to participate and provide for the needs of those who will be our guests.

Putting our values into action

By its public nature, sanctuary is an act of defiance against  inhumane government policy.  There is national and local precedent for our actions. During the 1980-92 Salvadoran Civil War, Saint Michael’s Catholic Church in Olympia provided sanctuary to a Salvadoran family seeking asylum.  A father and his three children were housed for three years until they found permanent refuge in Canada.

Bob Zeigler was a member of St. Michael’s who took an active role in supporting the family.  Now a member of Strengthening Sanctuary and the Interfaith Network, Bob helped us understand the continuities between the struggles of the 1980s and the actions we take today. In protecting one family, his congregation pulled together and gained a stronger sense of focus and community.  We believe our actions will generate that same strong sense of a community that is living its values and putting them into action.

The next step in this important work is to let people know that sanctuary is available in our community if they need it. The decision to enter sanctuary is not an easy one. There are reasons why the approximately 1100 sanctuary congregations nationwide have only 37 people residing with them at last count. It is a huge sacrifice to commit to what is, essentially, a form of house arrest that may go on for months or years.

Sanctuary is a public act of defiance, an act of trust, and a last desperate measure when all other efforts to avoid deportation fail. But rather than endure separation from their families or risk the certain dangers of returning to their homelands, some brave people choose to avail themselves of sanctuary and the support of the community that offers it.  As those people come forth, we will be ready.

As communities of faith we have a commitment to protect people experiencing hate, violence, persecution, profiling, and fear. We therefore stand together in solidarity with our immigrant brothers and sisters and their families, and identify ourselves as the Greater South Sound Faith Network for Immigrant and Refugee Support.

We are dedicated to the safety and well-being of all in our community regardless of their immigration status.

We recognize the need for short- and long-term sanctuary for persons facing family separation or deportation, and we pledge to support any member faith community that is able to provide physical sanctuary to immigrants and refugees in need.

We will strive to provide the needed services and funding to any faith community giving physical sanctuary. We will establish a communication system to respond to requested needs in a timely fashion.

We assert that supporting people in sanctuary is not an act of charity. It is a partnership of equals acting in solidarity. We will always remember that sanctuary is not something that we do for our undocumented neighbors; it is something we do with them.

We welcome the support of the larger South Sound community in realizing these efforts, and invite other organizations and individuals to offer assistance.

The United Churches of Olympia

Interfaith Works Board of Directors

Information about the Interfaith Network can be found on the Interfaith Works website: http://interfaith-works.org/social-justice/immigration-and-refugee-support/

Robert Perretz-Rosales has lived in Olympia for 40 years. He is an active member of Strengthening Sanctuary and Temple Beth Hatfiloh. 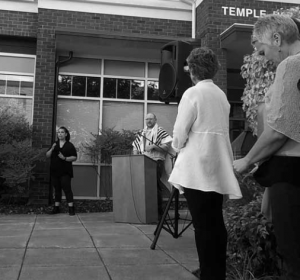