Years of herbicide treatments and no end in sight

Black Lake District residents have submitted a petition to the Thurston County Commissioners asking for the dissolution of the current Black Lake Flood Control District (BLFCD).

More than 200 residents from across Thurston County submitted a supporting petition requesting that the County create a Lakes Management District in place of the BLFCD.

Despite years of toxic herbicide applications and a $1.4 million dollar bond-funded alum treatment program, the BL Flood Control District actions have failed to address failing septics and stormwater pollutants entering Black Lake, or to protect the aquifer recharge areas and Strategic Groundwater Reservation of the State Capitol connected to the lake. Their actions have instead contributed to the long-term nutrient loading issue that is a primary cause of Black Lake’s toxic algae blooms and deteriorating water quality.

Citizens for a Clean Black Lake (CCBL) has been trying since last summer to get the County to recognize that the BL Flood Control District was formed improperly and is incapable of solving lake-wide problems. The petitioners point to the State law that provides for Lake Management Districts as the mechanism to address precisely the problems plaguing Black Lake.

In its initial challenge to the BL Flood Control District’s proposal to levy a bond for an alum treatment to the Lake, the CCBL asked County Commissioners for a full environmental review to include other agencies with expertise to consider the broader picture of water quality impacts in the Black Lake Basin. Black Lake’s importance to the larger community was recognized when it was designated as part of the State Capitol Strategic Groundwater Reservation (SGR) in 1986.

CCBL noted that Black Lake is in hydraulic continuity with Olympia and Tumwater’s city wells. and neighboring private wells. It overlies 16 Critical Aquifer Recharge Areas used by the City, the County and the State Capitol Campus, as well as the Strategic Groundwater Reservation.

Because of its connection to the north through the Black Lake ditch to Capitol Lake and Budd Inlet, Black Lake is subject to the federal Clean Water Act and Safe Drinking Water Act. These forbid the dumping of toxic chemicals into federally protected waters with species at risk of extinction, in this case, the salmon and Orcas of Puget Sound. Black Lake with its contaminants also drains south via the Black River through the Black Lake National Wildlife Refuge into Grays Harbor.

CCBL specifically sought consideration of alternatives to the use of herbicides and alum and a review of critical areas and impacts to County groundwater supplies. They cited several science-based studies by government agencies and private consultants hired by the BL Flood Control District, all of which concluded that stormwater runoff and failing septic systems were the major contributors to excess nutrient levels in the lake.

These nutrients caused the growth of aquatic weeds and algae, whose accumulation is not addressed by the District’s annual use of herbicides or alum treatments, which only exacerbate contamination of the SGR.

Why a Flood Control District when Black Lake doesn’t flood?

The BL Flood Control District encompasses 179 lakefront parcels around Black Lake, including two County parks, a Fish & Wildlife public boat launch, and 587 upland parcels. It grew out of the Save Black Lake Coalition, a nonprofit composed primarily of lakefront property owners mostly concerned with damage to boat and watercraft engines. It was formed under a provision of state law covering districts that “provide diking, drainage and flood control facilities and services.”

Black Lake does not flood; is not listed as a flood control district on the Municipal Research Services Center website as are others in the state; and does not appear on FEMA maps as flood-prone.

The stated purpose of the new District was to “keep lake water clean of …invasive species and nuisance weeds that prevent lake enjoyment and damage boat and watercraft engines.”

The BL Flood Control District’s purpose of “keeping lake water clean” is not recognized by the State as a function of a special district. But forming under the state’s flood control statute (RCW 85.38) had a unique benefit. It allowed a 3-member board of lakefront property owners to make all decisions for the lake—with little public participation; oversight or input by the County; or adherence to the County’s stricter Integrated Pest Management Plan.

CCBL continues its effort despite approval of the bond levy

After the County Commissioners approved the bond and the tax increase on the basis of respecting the Flood Control District Board’s “self-governance”, the CCBL turned its attention to the Department of Ecology.

The Flood Control District obtains its authority from a permit issued through Ecology for an Aquatic Plant and Algae Management (APAM) National Pollution Discharge Eliminating System (NPDES). The permit ignored state and federal legal requirements as well as the impact on the Strategic Groundwater Reservation, and was issued without any SEPA /NEPA environmental review of the site.

CCBL asked Ecology to revoke the Board’s APAM permit for the alum treatment. They argued that the Flood Control Board had assumed the powers of the state legislature, which established separate and distinct purposes for flood control districts versus lake management districts. Ecology’s own APAM permit fact sheet does not list flood control districts as entities with the legal authority to obtain APAM /NPDES permits for the actions noted above. Counties, however, can obtain such permits.

CCBL further argued that the permit was not granted on the basis of a site-specific environmental review. Instead, Ecology based its permit coverage on outdated non-project Ecology documents that, according to the Citizens’ group, were inadequate for the Flood Control Board projects.

Washington law requires the responsible official (in this case, the County) to complete an Environmental Impact Statement for any proposal that “significantly affects the quality of the environment,” including impacts to wetlands and endangered or threatened species or their habitat. This was not done.

Ecology granted the permit solely on the basis of the Integrated Aquatic Vegetation Management Plan used to form the BL Flood Control District in 2012. The Aquatic Vegetation Plan described the project as limited to two years of herbicide treatment followed by the mechanical harvesting of weeds. CCBL argued that herbicide applications and alum treatments after 2014 would have required their own site-specific environmental review.

A continuing commitment to the lake and its residents

When Ecology declined to revoke the alum permit, CCBL continued to organize residents. The task was made more difficult by COVID restrictions. Despite this, the petition gathered enough signatures from Black Lake District residents to meet the requirement for a public hearing on the request that the District be dissolved. County residents added their voice on a separate petition to the County Commissioners, also asking for dissolution of the Flood Control District, to be replaced by a Lakes Management District.

Lakes Management Districts (LMD) were established by the legislature to address not just the symptoms but the causes of eutrophication and deteriorating water quality seen at Black Lake and other lakes. These districts prescribe a management approach that promotes conservation and “long-term strategies that focus on reducing nutrient inputs from human activities.”

A LMD also provides for substantial public process in its creation and operation. The activities it will perform, the duration of its existence (up to ten years) and the rates that will be charged to finance them are spelled out at its creation and cannot be altered without further public hearings.

A LMD has a steering committee of 12 residents serving in a strong advisory role to the County Commission which has ultimate authority. The BL Flood Control District is controlled by a three-member Board elected once every six years. It is not accountable to the County,

When residents vote for a Lakes Management District, they know exactly what they are voting for and how much it will cost them. By contrast, residents in the Flood Control District may not know what actions the District will take, or how much they will be assessed for those actions.

When the BL Flood Control District formed in 2012, residents were told the lake would be treated with herbicides for only two years with no mention of expensive and short-lived alum treatments. Yet they have been paying for annual herbicide use and are now responsible for repayment of a bond for the next 20 years.

With this practice there is no end in sight. Each herbicide application creates yet more submerged rotting vegetation that increases the nutrient load in the lake, creating yet more algae blooms.

A Lakes Management District is subject to environmental review

An LMD must consult with and consider the recommendations of the Department of Ecology, Department of Natural Resources and the Department of Fish and Wildlife. It has obligations to enhance fish and wildlife and is eligible for matching grant funds and other financial resources not available to a flood control district.

The County justified their approval of the $1.4 million alum treatment bond as a sensible short-term strategy to buy time for it to address the longer-term nutrient loading issue. A year later, the County has done nothing to address that issue. 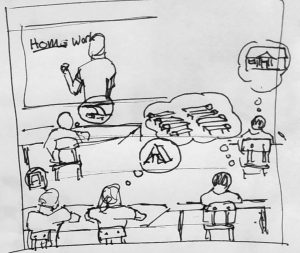