Pie in the sky on the campaign trail

While campaigning for the presidency in 2016, Donald Trump promised to “repeal and replace” Obamacare with a “fantastic” health plan: a better plan that would “cover everyone” and “cost less!” He made the promise repeatedly for the next four years. He has yet to offer any plan let alone a better and cheaper plan.

But his tactic has not changed. Today Trump campaigns for another four years with another empty promise. He will eliminate the payroll tax that funds social security—but he promises this will have “zero impact” on Social Security benefits. 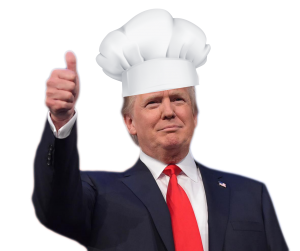 An earlier President had an answer for that kind of claim. The year after passing the Social Security Act of 1935, Franklin Roosevelt warned of those who proposed to eliminate the government program because they would do everything social security did …without costing anyone anything. Here is FDR foretelling the fate of Social Security if we listen to Donald Trump!

Our baker-in-chief is still trying to sell us pie in the sky.