We are all familiar with the dominant narrative that the virulent strain of influenza known now as N-Covid-19 originated at a crowded seafood market in Wuhan China when an errant bat infected poultry, passed the virus to humans and quickly mutated into at least two deadly strains. Because the market is mere miles from Wuhan’s first BSL-4 laboratory, with 60,000 strains of over 1,400 viruses, many have asked whether Covid-19 is a naturally occurring phenomenon or a powerful virus manipulated by humans and accidentally or purposefully released.

Despite the concern of numerous individuals and organizations who warned that accidents or bio-terrorism could cause widespread loss of life, the National Institutes of Health in late 2017 lifted a three-year ban on the funding for “gain of function” research – developing genetically-engineered viruses to make them stronger and more contagious by manipulating proteins.

Allegations by scientists that Covid-19 might be a weaponized version of SARS have been roundly criticized by, among others, The Federation of American Scientists. The observation that it has four protein markers from the HIV virus (which would indicate human manipulation), they say, has been proven false, pointing to research published in Nature magazine which states Covid-19 is 96% identical, genetically, to another coronavirus found in bats, disproving the human intervention theory.

Before it disappeared from the internet in March, a professor of neurobiology at the University of Pittsburgh’s School of Medicine wrote an extensive rebuttal of the Nature article, citing research on ferrets that may have been done to disguise human intervention.*

Others, like Francis Boyle, international law professor at University of Illinois, and author of the Biological Weapons Anti-Terrorism Act of 1990 (BWATA), also have their doubts about the natural evolution of Covid-19. As he stated in a recent interview “There have been leaks before of SARS out of this facility and indeed the only reason for these BSL-4 facilities, based on my experience, is the research, development, testing and stockpiling of offensive biological weapons… this is a brand-new generation of biowarfare weapons we haven’t seen before.”

The world is overflowing with bioweapons research facilities

The Pentagon, with over $2 billion in funding, operates bioweapon research laboratories in 25 countries. The Cooperative Biological Engagement Program (CBEP) maintains lab facilities in the Middle East, Africa, and SE Asia, and former Soviet nations like Georgia and Ukraine. 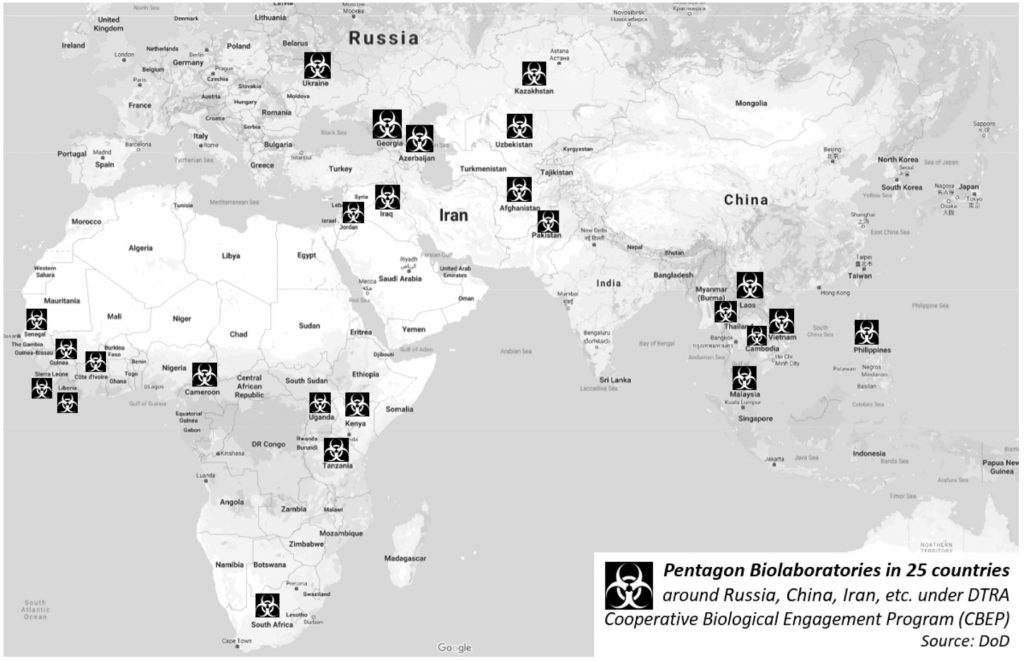 The actual work being done in biological weapons labs around the world is classified. But some of that highly secretive research has been revealed through leaked documents leaked to investigative journalists. One example is an application to patent a toxic mosquito aerial release system, not to counter the effects of such an organism, but to manufacture it for use.

Cargo shipments to the Tbilisi laboratory in Georgia and other Pentagon facilities enjoy diplomatic immunity in transporting pathogens, human blood, and other unidentified substances which are exempt from inspection and taxation.

As defined by BWATA, a biological agent is “any microorganism, virus, infectious substance, or biological product that may be engineered as a result of biotechnology, or any naturally occurring or bioengineered component of any such microorganism, virus, infectious substance, or biological product, capable of causing death, disease, or other biological malfunction in a human, an animal, a plant, or another living organism; deterioration of food, water, equipment, supplies, or material of any kind or deleterious alteration of the environment.”

The provisions of BWATA make it illegal for individuals and “non-state” organizations to possess, manufacture, purchase or sell bioweapons but it excludes and holds harmless all such actions when used for defense purposes by official state agencies.

Boyle says the US has spent over $100 billion on biological warfare programs, estimating that around 13,000 scientists work in the “biowarfare industry” in the US alone. As long as they are employed or contracted with the government, their work is safe from prosecution, while the same work, when performed by others, is illegal.

Because they can occur in nature, research into infectious diseases is seen by many as necessary. Since other countries participate in biowarfare, the US may feel doubly justified in countering virulence unleashed by its enemies. But is it possible the current epidemic of fear surrounding the spread of Covid-19 could be used to implement more restrictions on our freedoms in the name of safety?

Six weeks after the World Trade Center disaster in 2001, a series of letters and packages laced with the toxin known as anthrax were sent anonymously to individuals in government and media. Five people died and 17 others were hospitalized as a result.

Ultimately, no one was prosecuted for the crime of spreading the anthrax spores and the investigation in the ensuing years appears to have been abandoned. The fear generated by the events was used, however, to compel legislators to pass the Patriot Act at breakneck speed. Congressional leaders who protested they didn’t have time to read the bill into the record, let alone debate it, were threatened by Bush administration officials with being labeled terrorists themselves if they did not immediately pass the bill.

Citing what the media relentlessly characterized as a severe ongoing threat to Americans, the Patriot Act became law, ushering in the legal surveillance of US citizens using public and private records, internet history, medical history, purchases, travel and any other means if deemed necessary by the government. The Act authorizes the CIA to conduct spying and detain indefinitely citizens accused of crimes even before due legal process.

The Patriot Act also denied Americans their right to oppose the law through legal means. In other words, a citizen can be accused of a crime using his or her private data, but not only can’t defend themselves against the claim – they can be jailed for it before being proven guilty.

People worldwide have wisely and voluntarily complied with measures to control the spread of Covid-19, including public and private quarantines, work stoppage and travel bans. In mid-March, while California governor Gavin Newsome assured residents that discussions of medical martial law were premature, 22 states had already called on National Guard troops to assist with the contagion and mandatory temperature checks were being instituted at travel checkpoints and workplaces in many countries.

There is no definitive description for martial law, but The American Law Library says under such conditions “certain civil liberties may be suspended, such as the right to be free from unreasonable searches and seizures, freedom of association and freedom of movement. And the writ of habeas corpus (the right to a trial before imprisonment) may be suspended.”

Lori Lively is Associate Editor at Works in Progress. For more background on governmental bioweapons work, see Biological Warfare and Terrorism by Francis Boyle or go to https://grants.nih.gov/grants/guide/notice-files/NOT-OD-17-071.html. For updates on the Patriot Act, visit ACLU’s Surveillance Under the USA/Patriot Act.

*Harvard to the Big House: Logistical and Technical Exploration into the Origins of the Wuhan Strain of Coronavirus (COVID-19)