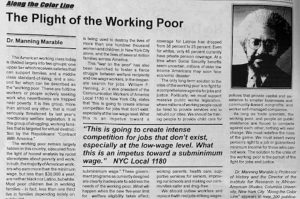 Works in Progress is celebrating thirty years as a community-based, volunteer-run, progressive community newspaper. WIP started as a community newspaper sponsored by the Thurston County Rainbow Coalition. The mission statement then read like this: “Our aim is to confront injustice and encourage a participatory democracy based on economic, social and environmental justice. Works in Progress is dedicated to providing a voice for those most affected by the exclusionary and unfair practices that seek to silence the oppressed.” To celebrate WIP’s 30th anniversary, we will run short pieces each month that highlight issues WIP writers were concerned about then, and continue to write about today.

Highlighting past issues that remain critical

During this, our anniversary year, WIP each month will highlight an issue that concerned WIP writers over the years, and still are a concern. for us today.

In 1997, WIP ran a piece by Dr. Manning Marable called “The plight of the working poor.” Marable was writing about the crisis of jobs for low income people—or rather the lack of them.

Marable wrote, “Perhaps the larger question to be answered is why there is a crisis of jobs for low income working people? Part of the fault lies in the deliberately destructive policies of the corporations, which in recent years have destroyed or exported millions of higher paying jobs in steel, auto, tire, and chemical industries. The new jobs created in the 1980s and 1990s often had limited fringe benefits and poor health care coverage. One 1996 study by researchers at the University of Massachusetts at Boston notes that the overall percentage of blacks covered by private pension plans has fallen from 45 percent in 1979 to 34 percent in 1993, while pension coverage for Latinos has dropped from 38 percent to 25 percent. Even for whites, only 45 percent currently have private pension coverage. At a time when Social Security benefits seem uncertain, millions of older low-income Americans may soon face economic disaster.”

The focus of Marable’s critique, 1996’s Personal Responsibility and Work Opportunity Act which was proposed by Republicans and signed into law by former president Bill Clinton, made thousands of families ineligible for income assistance.

Some things haven’t changed. In 2020, President Trump’s sweeping changes to eligibility requirements for Supplemental Nutrition Assistance (SNAP) made nearly 700,000 people ineligible for income assistance. As Maggie Dickinson, faculty member at Guttman Community College in NYC explained, it’s the same argument: “if we cut people off of benefits, food stamps or Medicaid or cash assistance, they’ll go into the workplace, and that’s a path out of poverty. But in reality, that has never actually worked.”

Marable concluded his piece by advocating that the “solution to the crisis of the working poor is the pursuit of the fight for jobs and justice.” Twenty-three years later, his solution still holds. 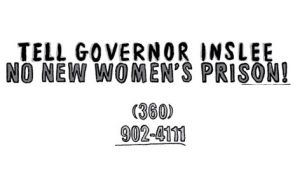