Getting beyond “the argument culture”

Working with couples who are at odds brings into clearer, sharper relief the existential struggle to have a dialogue outside the framework of “The Argument Culture” which is all over Cable News, Fox, and everywhere.

In the Argument Culture, no one wins; there’s no person-to-person affirmation; no genuine affection building human bonds—quite the opposite.

What is lost is the ability to listen; to be present for oneself and for one’s partner; to have an authentic connection.

More importantly, we are losing the uniquely human capacity to discern clarity from cloudiness; and more important than that, truth from fiction.

There’s been a cultural, social, relational deconstruction of meaning; of the confrontation of truth and fiction; with fiction gaining a tragic, potentially catastrophic, outcome.

Recently the Washington Post noted that Kevin McCarthy, the House Minority Leader, confirmed—the truth doesn’t matter to most Republicans; what matters is what they believe.

In the rush to attach to serial falsehoods; to weave them into one’s relational reality; to act on them and to transform them into pernicious, toxic policy, creates unparalleled conflict, confusion, and desperation, and with that, the deterioration of the human, social, civil, relational bonds that guide and promote human and civilized well-being, whether on inter-personal, inter-sectional, international bases.

Trump epitomizes all this though he didn’t create it.

[Thanks to EF for this response to a layered question.] 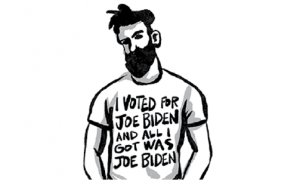