Cooking up some political power

At our house, we’ve been watching cooking shows to help us weather the pandemic. My recent favorite

actually involved very little cooking, however. The cook. Alexandria Ocasio-Cortez. forgot about her “salmon-cream-pasta situation” as she broke down what ordinary people need to know as we head into the next legislative cycle.

AOC’s consistent theme is not just that we aren’t getting what we need, but that we have to get better at holding elected officials accountable. Wearing her now-famous, US-made and union-printed sweatshirt that says “TAX THE RICH,” Alexandria Ocasio-Cortez grated some lemon peel and broke down the difference between laws adopted by Congress, and actions that can occur without passage of a law.

COVID–relief requires a law, she explains, reminding us of the School House Rock video on how a bill becomes a law. But canceling federal student debt is an action Biden can take on his own, once he’s inaugurated. An hour into the show, AOC has scraped the peel off a lemon, set some water to boil, and reminded us that elections are just one part of a longer struggle for change.

Midway through her cooking show, AOC pointed out that we’ve all been indoctrinated. We’ve learned to accept as “normal” the fact that people have to choose between paying rent or paying for medicine. We accept as “normal” that a person working 40 hours a week cannot pay their bills. We accept that billions of dollars in the COVID–relief act go directly to the 1%. When we challenge these practices and try to change them, we’re labeled radicals, a term used to shut people down and push them out of “normal” electoral and political spaces.

We consider it radical when elected officials in another country try to subvert a fair election, but here in the US, people on the right and even in the center carry on as if attacking the election is normal. We would think it profoundly wrong if in another country, a member of the police force could kill someone and not be investigated. Yet in the US we still treat this as normal, and label as radical those pushing for reform.

As AOC put it, the “radical reality of a conservative corporate norm lets people die because they can’t afford insulin.” That passes for normal in this country. For progressives to succeed in advancing an agenda centered on the needs of working people, we have to get better at calling out those who, as AOC puts it, “indulge in the narrative of common sense to hide the radical nature of their ideas.”

you “should be watching all these people,” no matter what party they belong to.

It’s not radical to believe that healthcare is a human right. Healthcare that includes physical, dental, vision, and mental health, not the right to buy insurance that offers us a “raggedy bronze plan” as AOC puts it. It’s not like providing health care is harder than going to space. Nothing in the program of progressive groups like Our Revolution or Run for Something is radical. In fact, we are just trying to catch up with what is normal in other civilized nations.

Organizing in behalf of progressive candidates

Nationally, Our Revolution: Organize to Win which has been mentored by Senator Bernie Sanders, successfully supported candidates and ballot initiatives in 25 states and the District of Columbia. Their four point platform:

Our Revolution helped to organize many successful campaigns in the 2020 election. In Washington State. seven of the nine candidates they endorsed were elected to office. These ranged from county commissioner spots, to House and Senate seats in the state legislature, and in the US House of Representatives. The ballot initiative they supported, “Sex Education in Schools,” was also successful.

In Arizona, thirteen of the fourteen candidates Our Revolution supported won offices from the county to the state and federal level. Statewide initiatives to increase school funding and legalize marijuana, were also successful. In Florida, Our Revolution candidates won offices at the city and state level as well as in the US Senate.

Another one of the many groups working to increase the presence of progressives in office is Run for Something, Founded in 2016, the organization backs state and local progressive Gen Z and Millennial candidates. According to co-founder Ross Morales Rocketto,

“these political newcomers reflect a generation that grew up watching Democratic leaders from Bill Clinton’s ‘big government is over’ school of politics try to solve massive social problems with small fixes and slight shifts; now, they are asking why government can’t do more.” According to the Run for Something website, 14,000 potential candidates entered their addresses and identified potential offices for which they could run. .

Keep showing up no matter who wins the election

A core assumption in both groups is that elected officials are public servants, responsible to address the needs of the people they represent. By centering campaigns on those needs, candidates are succeeding.

More people are running for office, and more people are voting. As the Run for Something website puts it, “Local candidates are like super-charged field organizers with personal skin in the game—if these candidates win, they become public servants who can use their power to make a meaningful difference for their voters.”

With roots in a family that was proudly independent, AOC is guided by the belief that you “should be watching all these people,” no matter what party they belong to. Political parties are not fan clubs and “elections are not like ‘set it and forget it’.” After an election, lobbyists and special interest groups keep showing up to work on whoever takes office. Progressives need to do the same, or we won’t get anywhere.

Emily Lardner lives in Tacoma and writes often in these pages. 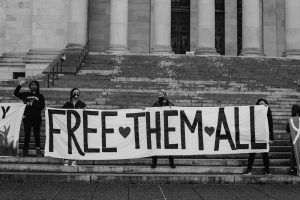