Dangerous and unaccountable: the record of police officer Ryan Donald

May 21, 2019 marked the four year anniversary of the police shooting of two Black brothers, André Thompson and Bryson Chaplin. Officer Ryan Donald is the white police officer who shot André and Bryson multiple times each. They both survived. Anniversaries of police terror incidents are always difficult for the people and communities directly impacted by the trauma.

For the Chaplin–Thompson family, that means both surviving and struggling. André and Bryson have become permanently disabled as a result of the shooting, both with PTSD and serious health complications. Officer Ryan Donald shot a bullet which remains in Bryson’s back, and he is now a wheelchair user as a result. Officer Ryan Donald was never held accountable for the harm he caused, and it was André and Bryson who were charged with “assault” and had to spend time in jail.

A review of the trial as well as other incidents involving Officer Ryan Donald tell us that keeping Donald on the Olympia police force puts everyone, especially Black, Brown, Poor And Disabled 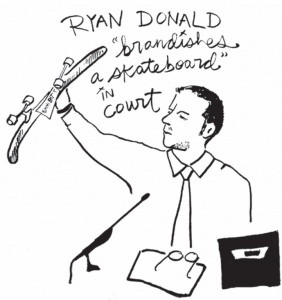 community members in mortal danger. During the trial that led to the incarceration of André and Bryson, Ryan Donald’s testimony was full of lies and contradictions. One of the most obvious falsehoods came when he tried to justify his use of lethal force by claiming André and Bryson had used their skateboards as weapons. People in the courtroom laughed audibly, as Officer Ryan Donald, holding a skateboard dramatically over his head, described the board as being four feet long when it was clearly half that.

This is important since the evidence in the case rested on Ryan Donald’s testimony., and this offered a clear example of his basic judgement of facts being out of line with common  perceptions. During the trial, the defense submitted one of many racist memes from Ryan Donald’s facebook page as evidence of his anti-Black racism. The meme was of Reverend Dr. Martin Luther King, during his famous “I Have a Dream” speech, only this image had an ice cream photoshopped into King’s hand, and the caption said “I have a dreamsicle.” In court, Officer Ryan Donald claimed it was a play on words meant to be funny—which doesn’t make it any less racist.

During the jury selection process, one of the potential jurors shared a story about Ryan Donald’s racist behavior. The older white man said he had been having a problem with mail getting stolen from his mailbox. He called the Olympia police to report it. It took a long time for the police to respond to the call, and when they finally did, it was Ryan Donald. Officer Ryan Donald immediately started questioning the man’s roommate, who is an Indigenous Woman, as if she were a “suspect,” when she was actually one of the victims. The man said involving the police was more harmful than helpful. That man, of course, did not make the final cut to get on the jury.

Another example of Officer Ryan Donald’s racist violence was suppressed in the courtroom. According to multiple court documents, one year before the shooting of André and Bryson, in the early hours of May 28, 2014, Officer Ryan Donald assaulted CenturyLink employee Tyrone Johnson. Tyrone had been called in to tend to a power outage. He was in uniform, returning a work vehicle. Officer Ryan Donald drove past the CenturyLink building on Martin Way, “noticed an open garage door and a dim light,” and saw Tyrone. He quickly asserted that “burglars were inside” and called for back-up. Tyrone now has PTSD from being thrown to the ground, and having five police officers pointing guns, including AR-15 assault rifles, at him while merely being Black and at work. Tyrone Johnson filed a million dollar civil suit against the City of Olympia naming officers Ryan Donald, George Clark, Jonathan Hazen, Eric Henrichsen and Matthew Henschler, for assault, battery and unlawful imprisonment.

The trial of André and Bryson was delayed many times for many reasons, one of them being Officer Ryan Donald’s involvement in the violent wrongful death of Jeffrey McGaugh. On February 28, 2016, white, 44-year-old, father of two and Loved One, Jeffrey McGaugh, was in a mental health crisis in downtown Olympia at the transit center, and needed de-escalating. Instead of helping, police officers Sgt. Dan Duncan, Rob Beckwell, Jonathan Leavitt, Javier Sola Del Vigo and Ryan Donald intervened, and Jeffrey died. An internal investigation after Jeffrey’s violent death unsurprisingly found the cause of death to be “inconclusive,” and not caused by this use of deadly force. Officer Ryan Donald missed a deposition in André and Bryson’s trial because he was put on paid administrative leave, which is standard procedure when the police kill someone.

Jeffrey McGaugh is not the only “inconclusive” Olympia death at which Officer Ryan Donald was present. On February 7, 2018, white Loved One and trauma survivor Vaneesa Hopson was in a mental health crisis in the West Olympia apartment building where she lived with her young son. The fire alarm was pulled, a neighbor called 911, and fire fighters, EMTs and police were dispatched. Bystander videos show Vaneesa outside her apartment being wrestled to the pavement by police, including Officer Ryan Donald. He and two other officers piled on top of Vaneesa while she screamed in terror, crying out “don’t drug me,” and “they’re going to kill me!” One of the responders, instructed by police, injected her with a dose of Versed, a “chemical restraint,” without considering whether the drug could be fatal—as it turned out to be. When her family came to the hospital to say goodbye to Vaneesa, her face and body were covered with wounds, evidence of the violent encounter that led to her death.

How many more deaths and disabling use of force incidents does Officer Ryan Donald have to engage in before he is held accountable or fired?

As the May 21 anniversary of the shooting of André Thompson and Bryson Chaplin passed once again, closeby as always to Mother’s Day, the Chaplin–Thompson family spent both days together, out of the public eye, and in celebration of life. They are currently engaged in a retraumatizing civil suit which stipulates “no public comment at this time.” The local chapter of SURJ, Showing Up for Racial Justice, is doing direct support of the Chaplin-Thompson family, and donations can be made at paypal.me/OlympiaSURJ.

Lisa Ganser works for Idriss Stelley Foundation, writes for POOR Magazine and is a white, Poor, Disabled, Non Binary, Queer artist and organizer living in Olympia on stolen Squaxin, Chehalis and Nisqually land. They are a sidewalk chalker, a copwatcher, a dog walker and the Daughter of a Momma named Sam.