My last column discussed the movie Imperium, about the infiltration of white supremacist groups by FBI agent Mike German. The commercially available disc of this movie has some extra features, one of which is an interview with the producers and German. They make the crucial point that many white supremacists are fundamentally motivated by fear that they will lose what little they have due to the political and social ascent of people of color. It doesn’t matter what you tell them about Trump’s blatant lying and misogyny, for example, or about the oppression suffered by people of color in our country. As long as they hold on to this fear, you won’t be able to get through to them.

This raises the question as to how we can interact effectively with such people? One possible answer is provided in a book called Strategy, by Basil H. Liddell Hart. The author is an outstanding British military strategist who has written comprehensive histories of the two world wars as well as detailed analyses of the classic battles of history, such as of Napoleon.

This book, published in 1967, advocates a break with classical military strategy such as that exemplified by Clauswitz who advocated an overpowering frontal attack to effect victory. Against a well-placed defense, such a course of action will fail even if used by a considerably stronger military force. Rather, Liddell Hart calls for using an indirect approach (such as an unexpected flank attack) to weaken the strength and resolve of the enemy prior to the main assault. It is especially important to attack the enemy’s morale in this way, so that he is no longer an effective fighter.

How can such military strategy of indirect approach be applied to the problem of getting through to white supremacists, of challenging their basic fear for their own livelihood? An answer is provided by an article in The Fulcrum and reprinted in the Seattle Times on April 18, 2021. The headline of the article is “I’m a conservative. Here’s why I support voting rights.” It points out that manipulations such as voter gerrymandering and the use of huge amounts of “dark money” (hidden sources of funding) are in contradiction to the conservative values of honor and integrity. Here is an honest conservative whose values lead naturally to supporting “one person, one vote” in spite of the threat that his party will thereby be unlikely to win elections in the future.

Specifically, what I suggest is that we be powerful advocates for the rule of law, as being fundamental to the functioning of our society. This is a cause that people representing a wide range of political outlooks can unite upon—it is supposed to be the bedrock of American society. Placing the rule of law paramount does in fact mean rejection of the “dictatorship of the proletariat” of classical Marxist theory. It means that a socialist government will step down if it loses the election, for example. Especially with Trump’s Big Lie concerning his recent presidential election loss, the rule of law creates a contradiction between support of white supremacy and American (claimed) fundamental values. This indirect approach may cause many supporters of white supremacy to reconsider where they really stand, thereby opening them up to arguments against continued white supremacy. But without such a morale-challenging opening, our arguments and views will flow off them like water off a duck’s back.

Furthermore, our strong advocacy of the rule of law will help us in our work toward building an anti-right front against Trumpism. However, we must keep in mind that electoral work can be only secondary (in the long run) to our undertaking the transformation of society in a progressive direction. What crucially we must do is to promote the self-organization of progressive mass struggles, and to do this we must unabashedly promote our political views, even to the detriment of work in the electoral sphere. But such political views must still be in accord with the primacy of democracy and the rule of law.

Dave Jette writes this bi-monthly column and has been involved with Works in Progress since its beginnings. He has written three books, all available at www.lulu.com: A Reformulation of Dialectical Materialism, which incorporates feminist theory into a traditional Marxist framework; Beyond Classical Marxism, about socialism and how to bring it about in the US;  and Looking Forward, mainly offering the columns that appear here over time. 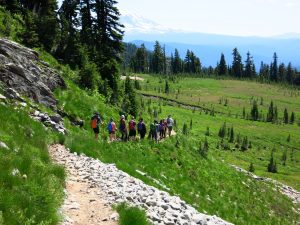