Activists arrested in Trident submarine blockade at Kitsap-Bangor Naval Base

On March 2, thirteen nuclear abolitionists blocked traffic leading into Naval Base Kitsap-Bangor, Washington as part of a public protest of Trident nuclear-missile-launching submarines based there.

The direct action came at the conclusion of the annual gathering of the Pacific Life Community, a network of spiritually motivated activists from the Pacific Coast and other western states committed to nonviolent action for a nuclear-free future.

Washington state police arrested nine people for obstructing traffic by carrying banners that stretched across the roadway just outside the base main gate. Their banners read “Trident Threatens All Life on Earth” and “Abolish Nuclear Weapons.” While they stood in the road, one of the blockaders read aloud from the Treaty on the Prohibition of Nuclear Weapons. Adopted by the United Nations General Assembly in July 2017, the Treaty will enter into force when ratified by 50 nations. Thirty-five nations have ratified to date. The US is not a signer.

Kelly, a Jesuit priest and member of the Pacific Life Community, has been in a Georgia county jail for almost two years after his April 5, 2018 arrest with six other Catholic nuclear disarmament activists

Shortly thereafter, four people carrying signs crossed one at a time onto base property. Before stepping over a blue line painted on the pavement, each made a statement to the assembled activists, police and military personnel. Each in turn was arrested by Navy security and taken into custody. They were issued trespass citations and released shortly thereafter, pending arraignment in U.S. District Court in Tacoma. The nine arrested by state police had also been quickly cited and released.

Activists also held a sign that read “We love you, Fr. Steve Kelly.” Kelly, a Jesuit priest and member of the Pacific Life Community, has been in a Georgia county jail for almost two years after his April 5, 2018 arrest with six other Catholic nuclear disarmament activists at the Kings Bay Trident base in Georgia. The seven members of the Kings Bay Plowshares await a sentencing date.

The weekend gathering and protest, attended by about 50 people, were hosted by the local Ground Zero Center for Nonviolent Action. The annual Pacific Life Community gatherings and actions are scheduled to mark the anniversary of the largest nuclear weapons test ever, Castle Bravo, that devastated Bikini Atoll in the Marshall Islands on March 1, 1954.

Each Trident submarine was originally equipped for 24 Trident missiles. In 2015-2017, four missile tubes were deactivated on each submarine as a result of the New START Treaty. Currently, each Trident submarine deploys with 20 D-5 missiles and about 90 nuclear warheads (an average of 4-5 warheads per missile). The warheads are either the W76-1 100-kiloton or W88 455-kiloton warheads.

The Navy has recently deployed a smaller W76-2 “low-yield” or tactical nuclear weapon (approximately 6.5 kilotons) on Trident submarine missiles at Kings Bay, Georgia and is expected to deploy from submarines at Bangor, dangerously creating a lower threshold for the use of nuclear weapons. 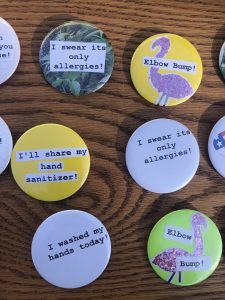