WIP covered freight derailments in February, and this month, Washington legislators sent Governor Inslee a bill that requires freight and passenger trains to run with a minimum of two crew members.

—climate activists were acquitted of criminal trespass by a Portland jury based on a defense that it is sometimes necessary to break the law to combat planetary catastrophe. WIP’s May 2019 issue covered the action by Rebellion Extinction along with Ken Ward, who presented the “climate necessity” defense in Washington as well.

—an oil pipeline on tribal lands has to comply with the law.  Standing Rock Sioux won its challenge of the Dakota Access Pipeline when a judge ordered a new environmental review by the Corps of Engineers. It turns out that Donald Trump had expedited the permit for Sunoco Co. in violation of federal law. WIP reported on Standing Rock Water Protectors throughout 2017.

—Socialist Ivo Morales actually won Bolivia’s 2019 election.  Remember how US papers and our government endorsed the claim by the OAS that the election was fraudulent?  And denounced Morales as corrupt?  And how the Trump Administration quickly welcomed a Conservative woman who declared herself President in place of Morales? Too quickly, it turns out. MIT researchers analyzed the actual vote and determined that Morales was the legitimate victor —there was no evidence of fraud.  Washington Post specialists in election integrity came to the same conclusion.

In the meantime, Morales was removed from power. A new military-installed government has tried to disqualify voters in the Movement for Socialism Party, ahead of new elections. But the damage is done – a country on the way to democracy was destabilized and handed over to conservatives and the military. Stay tuned for Venezuela.  (See WIP’s report on Bolivia’s election in March 2020 issue.) 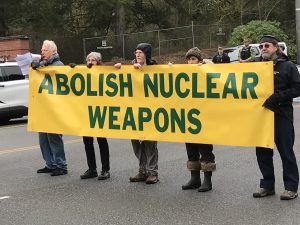