A political animal in extreme times

The question of my political work following the November 2018 elections is a difficult one for me to answer, as US electoral politics rarely have any direct impact on what I do, and certainly not mid-term US elections. An exception, in my case, was the November 2016 elections, which led me to write my 2017 book, Trump in the White House: Tragedy and Farce. That work raised the issue of the dangers associated with Trump’s rise to political power and the rapid spread of neofascist tendencies in the United States, defined by the alliance between big capital and a largely white (and racist) lower middle class. 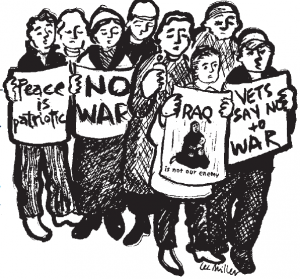 A beachhead in the 2018 election

The biggest danger that Trump represents, though, is to the planet and the future of human civilization, as his policies are designed to speed up global warming resulting from the burning of fossil fuels. The current strategy of the Trump White House, the billionaire class, and the fossil fuel industry, taken together, seems to be to smash attempts to address climate change until it is too late to act, in which case they can go on burning fossil fuels all the way to oblivion.

The November 2018 elections thus took on greater importance than usual in the context of countering a malign Trumpism (even if the instrument was a Democratic Party that has long since sold out to the powers that be and from which little can be expected), and because a small progressive beachhead was gained by the election of social democrats and women of color, including the first Muslim women to be elected to Congress.

The essence of politics in community

My own politics, however, are not generally aimed at electoral politics or political reform and regulation—or indeed limited to the United States. Aristotle famously said that human beings are political animals. Political activity in this sense extends far beyond the state, and beyond electoral politics, and is related to community, going all the way from the personal to the global. Politics thus rightly encompasses all of our social actions. Fighting racism, sexism (patriarchy), and LGBTQ oppression are all crucial—along with the class struggle, without which real substantive changes are impossible. What in Europe is called extra parliamentary politics is the very essence of radical-revolutionary struggle.

Revolutionary struggle and the crisis of capitalist production

I am particularly concerned in my own political activities with the global realm—beyond the dominant Triad of the United States, Europe, Japan—where more revolutionary struggles are being played out. At present I am concerned with fate of the Bolivarian Revolution in Venezuela, the Movement Toward Socialism in Bolivia, The MST in Brazil, the peasant revolts in India, the revolutionary movement in Nepal, and the global climate movement—as well as numerous other on the ground struggles.

I am likewise concerned, but in a quite different way, with various neofascist trends from Bolsonaro in Brazil to Duterte in the Philippines to Poroshenko in the Ukraine to Trump in the United States. The downward spiral of contemporary capitalism is manifested in a twofold disjuncture of economic stagnation and ecological collapse that together threaten all of civilization. This general crisis of capitalist production has now spread to the liberal-democratic state, resulting in the rise of extreme nationalist, racist, and neofacist currents, which draw their support not only from the lower middle class, and privileged (often white supremacist) populations, but also from key sectors of the financial class.

The imperial machine at work abroad and at home

The United States as the hegemonic imperial power is at the center of all of these developments. Recently, I watched a college football game and noticed that in one of the now ritual celebrations of the US military it was stated, as an item of pride, that US troops were in 137 countries around the world. Why does the United States have troops in 137 countries? (There are only 195 countries in the world all told.)

The United States has over eight hundred military bases located in seventy countries. Why? In the last year in which Obama was in office, the United States dropped 26,171 bombs. Drone assassinations were ordered by the president every morning, with his selection of the specific individuals or groups to be assassinated. Why? The truth is that the United States is the hegemonic military-imperial power in the world and aims to stay that way. All attempts by countries around the globe to free themselves from the clutches of multinational corporations and the world market are subject to political ostracization, economic sanctions, coups, assassinations, and military interventions—all engineered in part in Washington. It is this same imperial machine that serves to a large extent to keep our own population in line. Today’s militarized police forces are a crucial element in the New Jim Crow that has put grossly disproportionate numbers of Black men behind bars, and which makes Black men a principle target for police shootings.

Hence, for Americans, more than any other population in the world, anti-imperialism necessarily begins at home, where imperialism finds its world bastion: Fortress America. Those who reside in the United States have an indispensable role in making room for a world of substantive equality and ecological sustainability.

Going beyond the failed system

It is our job to support revolutionaries in the poorest and most oppressed nations on earth by backing their aspirations, and by opposing US militarism and imperialism abroad. We should acknowledge the cry, Let My People Go! Capitalism is now a failed system. But in order to go beyond it we have to fight to create a new future for humanity, and we have to begin where we are, while aligning ourselves with an emerging International of global struggle. Being a political animal in this sense, means a commitment to the global community, and to the most oppressed of the world’s people. We will not be free until they are free.

John Bellamy Foster is the editor of Monthly Review. His contact there is jfoster@monthlyreview.org