A “fixed and functioning West Bay” for whom and to what end?

As new “market rate” apartment buildings sprout up all over downtown Olympia, developers have set their sights on prime shoreline across the bay. What is more appealing to a well-heeled transplant than a view of sailboats and an iconic mountain with picturesque Budd Inlet for your front yard?

Developers Brandon Smith and Ron Newman have proposed a large-scale mixed-use project bordering the water on West Bay Drive, where Hardel manufactured plywood until its buildings burned down in 1996.

The promoters are calling their project West Bay Yards, “in tribute to our timber heritage.” “Yards” is the latest in trendy labels for such upscale “urban villages.” If the project comes to fruition, Olympia will join Camden Yards in Baltimore, Hudson Yards in New York City, Lincoln Yards in Chicago, and Dexter Yard in Seattle as “cities to watch.”

An economic magnet rising along the shore?

The sheer size and scope of such a project would make a significant change in the economic life of Olympia. West Bay Yards as proposed wouldn’t be a village, but a small town with a population exceeding that of many burgs—and an expectation to grow.

As Troy Nichols, the Phillips-Burgess spokesman representing West Bay Yards (WBY) told The Olympian: “Nothing happens without any economic impetus to get things going. If we’re ever to have a fixed and functioning West Bay, this the first step.” There’s already another proposal for a 40-unit apartment building across the road to the west.

Reviewing the specifics of the project

Over last summer and fall, the developer’s people spent time with the staff of the Community Planning and Development department (CP&D) laying out the specifics of the project. In addition to five apartment buildings with a total of 478 units, there would be new restaurant and retail opportunities, recreation facilities and offices. There would be parking stalls for 680 vehicles—with an expectation that the bulk of them could be underground. The proposal contemplated creation of an additional 1–1.5 acres of upland by adding new fill into the tidelands to achieve the density sought.

There were site maps showing vehicle access from West Bay Drive, an esplanade along the shore and an agreement that the developer would follow recommendations of a 2016 report on restoration of the “Hardel Reach.” There were construction sequencing documents and a shoreline restoration concept plan.

As these discussions wound down, the developer and city staff agreed that they would take advantage of a Washington law to give the West Bay Yards project certainty with a “Development Agreement” that would lock in current development standards for 15 years.

A “Development Agreement” is a binding contract between a city and a developer that specifies the obligations the developer has to meet, and ensures that new obligations will not be imposed on them during the term of the Agreement. In exchange, the developer includes in the project some public benefit that the city could not otherwise require. This might be infrastructure improvements, public open space, etc.

Development Agreements are reserved for major projects; they also serve as powerful tools that can give a city increased discretion when it comes to approving a development. To ensure against a blank check, Washington law requires every Development Agreement to specify standards, ranging from the very minimal to very complicated. It also requires that Development Agreements be presented at a public hearing before being submitted to the City Council for their evaluation and approval.

A project becomes a “non-project action”

The staff and WBY representatives wrote up a Development Agreement (DA) that had few particulars. Among other significant elements, it was missing “mitigation measures” required as part of the DA law. It confined itself to establishing “parameters and phasing schedule for future developments on the property” stating that everything in the Agreement was vested in the developer “under the Existing Land Use Regulations and may not be changed or modified by the City.”

The CP&D staff used the Development Agreement as the basis for completing a checklist whose purpose is to indicate whether there’s a need for a full environmental impact assessment under the State Environmental Policy Act (SEPA). By so doing, they turned the WBY project into a “non-project action.” Accordingly, they filled out the checklist for “The West Bay Yards Development Agreement” as a “non-project action.”

The determination of non-significance

Not surprisingly, the Agreement was found to have no meaningful environmental impact. The result: a DNS—a determination of non-significance. [See a description of Development Agreements and “non-project” vs “project” actions below.]

Notwithstanding the DNS, Washington law requires that Development Agreements be presented at a public hearing and reviewed for approval by City Councils. This is one of the few development decisions not delegated by Olympia’s council members to staff or an outside Hearing Examiner.

In November, the CP&D staff planned to recommend the Agreement to the Council. Pending the expected approval, the West Bay Yards project would go ahead under the Development Agreement. Findings of any subsequent environmental impact assessment could only be addressed within the terms of the DA. Instead, the train was stopped by a challenge to the “Determination of Non-Significance.”

On December 1, the Olympia Coalition for Ecosystems Preservation (OCEP), appealed the Determination Of Non-Significance (DNS) arising from the Development Agreement.

When OCEP learned of the West Bay Yards’ proposed Development Agreement, they were alarmed. “A project with impacts as potentially massive as the one proposed on a contaminated shoreline of a waterway that does not meet water quality standards mandated under the Federal Clean Water Act cries out for a comprehensive environmental analysis.”

Spokesman Troy Nolan of Phillips Burgess defended the City’s handling of his client’s application, “They don’t make the [environmental] determination willy nilly,” he said. “The staff is thorough and fair and they do a good job.” (The Olympian, Dec. 8, 2020)

OCEP had important objections to the Development Agreement itself, including the fact that it relinquished to a private company some major decisions about water quality, shoreline habitat and public access that belong to the public. Even the provision in the Agreement that purported to offer an otherwise unattainable public benefit was hollow because it was actually in the city’s authority to require.

Other concerns involve the way the West Bay Yards proposal relates to Olympia’s Shoreline Master Program (SMP). The proposal appears to contradict the SMP goal of ensuring no net loss of shoreline ecological function and processes, as well as the prohibition against restoration projects creating additional upland area—something explicitly intended for the West Bay Yards development.

OCEP’s appeal calls for the Development Agreement to be replaced by a public SEPA scoping meeting.

This would initiate the environmental analysis of the project that is needed for staff, Counsel and community to make an informed decision on how to proceed.

“Existing environmental analysis of the area is limited and based on documents that are in some cases nearly 30 years old.  No such analysis has contemplated a development on the scale proposed for West Bay Yards. No analysis—typically required in an environmental review of projects of unusual size and scope—has investigated alternatives.” (OCEP)

OCEP has asked for summary judgment of their appeal. It will be heard by Chehalis attorney Mark C. Scheibmeir who occupies one of the two positions that the City Council hires (the other is City Manager). Depending on the Hearing Examiner’s decision on summary judgement, the outcome of the appeal might not be known until March.

Consulted for this article were the appeal filed by Olympians for EcoSystem Preservation and a description of the project by the Thurston Economic Development Council among other documents.

Bethany Weidner has lived in West Olympia and watched it evolve over the last 35 years. 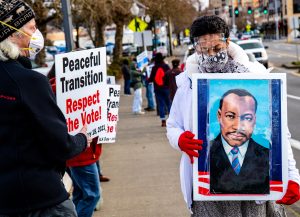