“Every possible asset trimmed to the bone”

The railroad industry is largely “self-regulated” which means that there is no outside agency that monitors safety or anything else, including collecting accident data. Recently the Railroad Workers United (RWU) made a list of “major” derailments on Class One railroads—not including passenger trains—and found an average of nearly one per week. No one would imagine that derailments are so common so we’ve listed them here. The National Transportation Safety Board investigates freight accidents only when there is a fatality or substantial property damage so, in many cases the “cause” of the derailment is not specified.

However, the RWU members have an insider’s grasp about why the increasing frequency of rail accidents. One driver is “PSR” which stands for Precision Scheduled Railroading—a new way to extract more profit by working fewer people longer and fewer assets harder. Ron Kaminkow is General Secretary of the RWU, and here is how he tells it:

The ranks of rail labor have been decimated. Loco and car inspections have been cut, resulting in more faulty equipment on the mainline, which can result in derails. Track inspections have been cut, resulting in undiscovered broken rails and other faults that can lead to derailments. Train lengths have grown exponentially, increasing slack and buff forces in train, that can result in derailments.

Train crews have been cut, resulting in longer hours and more fatigued and exhausted crews that can lead to operator “error.” We see all this and more as combining to increase the likelihood of train wrecks and derailments. The cost-cutting is run amok, with every possible asset being trimmed to the bone, including training, front-line management, simple maintenance, access to water, rotten food. Morale is at an all-time low, which again contributes to accidents in general.

In Canada, where the two senior railroads that have been under the sway of PSR—CP and CN—a dramatic increase in derailments has been logged. In addition, nearly a dozen rail workers have been killed in Canada in the last 2 years, which proportionately to the amount of track and number of trains/employees, would be quite an alarming spike in numbers in the US.”

The rail freight industry has long wanted to run trains with only one person on board, and last year the Trump Administration withdrew a rule that would have required a minimum of two. The goal is also to pre-empt states, several of whom require larger crews. Crew size has dropped from 5 in the 1970s, to 3 in the ‘80s and now to one or two.

2020 could be another banner year for derailments. January has already seen derailments, including several cars and the engine of a BNSF train leaking oil into the Kootenai River near Bonner’s Ferry, Idaho in an area accessible only by water. 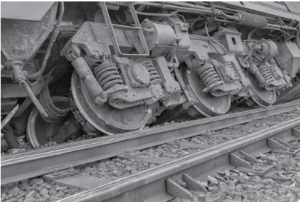 Baxter Lee compiled this list from data collected by the Railroad Workers’ United website and augmented it with information from contemporaneous news reports.
RWU is at www.railroadworkersunited.org

Next:
Questionnaire
How much poison are you willing to eat for the…
← Questionnaire ← Fort Discovery – The back story