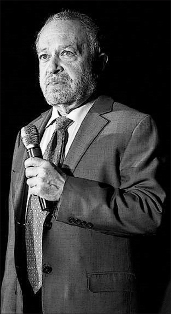 In a tradition that reminds us of the speakers at Hyde Park in London, when the American economist and political commentator Robert Reich delivers public speeches, he carries around a wooden stool on which he stands while he speaks. Because his height is slightly below five feet high, there is a practical reason for Mr. Reich’s comportment; he wants to make sure he is able to reach the microphone, but more importantly, he wants to be heard and seen because he believes in the importance of his message. Reich’s new video series on economic issues accomplishes just that. Within the context of the upcoming presidential elections, the series bring to the American public the possibility of viewing and discussing at home the absurd thinking of American capitalism and its nefarious consequences of inequality and racial injustice.

Democracy as fiction or function

After taking a look at the long rosary of presidential candidates (the Republican Party itself has 16 at the moment of this writing), one cannot avoid noticing the ‘family resemblance’ among them. Practically all of them, with insignificant variations, seem to carry the political birthmark of defendants of corporations and American oligarchy. They all seem busy singing the same version of a political discourse that insures the perpetuation of the current levels of social inequality and discrimination within American society, as well as the current restrictions on democracy by a national state focused not on the wellbeing of its citizens but on their spying and ideological control. All the mainstream candidates seem to be busy constructing democracy as a political fiction.

In the opinion of the writers of this article, only one voice currently expresses a radical contrast with this type of discourse—the voice of socialist Bernie Sanders who’s political platform seeks not only a significant reform of the functioning of the political economy of capitalism, but a widening of the functioning of democracy to bring it close to its original purpose. We also believe that the economic critique elaborated by Robert Reich is close to the general political umbrella proposed by Sanders. It is in this spirit, a spirit of transformations that are not only possible but immediate and necessary for the elimination of inequality and racist injustice, that we bring to our readers the main concepts and the related points of struggle necessary to transform the economy and the nation.

Robert Reich and the Moveon.org—teach-ins

Many readers of this paper probably watched Robert Reich’s documentary film, “Inequality for All,” that came out in 2013. A series of short videos produced by Moveon.org, an organization founded in 1998 by Joan Blades and Wes Boyd to support a “censure and move on” campaign in response the revelations about President Bill Clinton’s affair with a staffer, builds on those arguments and extends them, featuring Reich as narrator and illustrator.   Over the July 18-19 weekend, according to Brian Stewart, director of media relations for Moveon.org, more than 300 people hosted house parties, with the agenda of watching and discussing these videos. In lieu of a house party, we summarize them briefly here for your consideration.

Raising the federal minimum wage to $15 an hour is fair—no one working full time should find himself or herself living in poverty. If you work a full week, you ought to earn enough to support yourself and your dependents . Reich points out that half the minimum wage earners are women, and half are 35 or older.

Provide equal pay for equal work so that women and men who perform the same duties are paid equally. Give workers regular hours, reversing the trend toward on-call workers. Provide universal childcare, both preschool and after school care. Provide paid family medical leave. In short, “enable workers to be good parents”.

Currently, 5 banks control 44% of US banking assets, which means they wield tremendous influence over policy making. Bust them up with anti-trust laws, as happened to oil companies in the early 20th century. Banks that are “too big to fail” are simply too big. And implement a tax on every trade—a transaction tax.

Public interest has to take precedence over moneyed interests, which requires ending subsidies and tax breaks for oil, coal and gas; agribusiness; big pharmaceuticals; big Wall Street banks; and hedge fund managers. Only 12% of the federal budget goes to individuals and families, and at least that much goes to corporations. The balance needs to tip—people are the government’s top priority, not corporate welfare.

Unions improve working conditions for everyone. In the 1950’s, a third of public sector workers were union members; in 2010, the number had declined to about 7%. The decline of the middle class in the U.S. mirrors the decline in union membership. We need to make it easier to join unions, make it illegal for companies to punish union organizers, and, more important, pass a federal law that overturns state-based right-to-work laws. Workers in states with ill-named “right-to-work” provisions have lower wages overall and are less likely to have employer-sponsored health insurance or retirement plans.

Currently, the first $10,860,000 that a person inherits is tax-free. If you happen to inherit an estate valued at $10,860,001, you would pay tax on $1. Rather than eliminating the estate tax, as advocated by Republicans, Reich argues that we need to re-establish the estate tax rates of 1998, when estates over $1,748,000 were taxed. Right now, the richest 1% of Americans own 44% of America’s wealth. Taxing estates help correct that schism.

Incarceration as practiced in the U.S. is, as Reich says, “wrong and racist,” and it’s bad for the economy. We have 5% of the world’s population, and 20% of the incarcerated population. We’ve bought into a “lock-up, lock-out” system, where people of color are disproportionately locked up, and then, because of felony-restrictions, locked out of society permanently, unable to borrow money for college, get a mortgage, find a job, or even vote. We need to “ban the box”—the checkbox on applications that asks whether the applicant has prior felony conviction. We need smarter sentencing policies, including an overhaul of mandatory minimum sentences. We need to stop militarized policing. We need to stop building jails (and invest that money in education.)

Medicare is more efficient than private health insurance, and more people should have access to it. Two trends are inarguable: health care costs are increasing, and the post-war baby boom is aging. If everyone were allowed to sign up for Medicare on their health care exchanges, the system could use its increasing bargaining power to bring overall costs down and move us in the direction of a single-payer system.

All of these policy changes require politicians’ support, and so the first big battle is to reverse the Supreme Court ruling holding that money is equivalent to speech and cannot be regulated, by passing a constitutional amendment overturning Citizens United. In the last presidential election, 16,000 households contributed 40% of the money that went to campaigns. The predictions are that the upcoming election will be more expensive, and more vulnerable to tighter control by a smaller group of wealthy elites. We need—at a minimum—full disclosure of campaign contributions. We need a federal match for small donations to achieve an alternate stream for funding campaigns. Most of all, we need to overturn Citizens United.

These twelve ideas form the basic platform of the “teach-ins” organized by Reich and Moveon.org. They outline the straightforward policy changes necessary to relieve inequality and systemic racism, and to transform our economy and our nation by questioning the absurd thinking of capitalism.

Next:
In the not-too-far cosmic distance... We had a lot of…