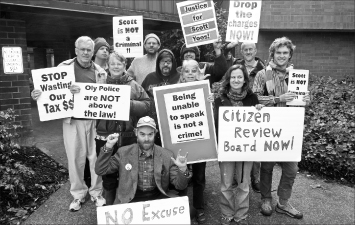 Yeah, the OPD cops still “love” to be bullies, but (finally) there’s some reason for hope!

Unlike its preceding month, October did see some action in the courtroom regarding our long-fought battle for justice! For those readers who are raw newbies, wholly unfamiliar with the traumatic, year-and-a-half old case brought by the Olympia Police against our friend and fellow WIPworker, Scott Yoos (in which they tackled him to the ground for using “possibly-assaultive” sign language, then brutally bloodied and arrested him…bogusly charging him with: “Trespassing”, “Obstruction of Justice”, and finally, a “Felony Assault” after he disposed some damp paper napkins in an open dumpster!) We would refer you to: www.scottysupport.blogspot.com and also: scottyooslegaldefense on Facebook, for (occasional) updates and further gory details about this absurd waste of Thurston County’s tax dollars.

The first hearing of the month (10/3) wasn’t much to report on, because of the Attorney’s absence due to illness.

A continuance was granted, and two weeks later (10/17) Scott Yoos and a healthy cadre of supporters returned to the County Courthouse (this time with the assistance of Scott’s much-valued Attorney, Larry Hildes who, with his wife/legal assistant, Karen, travels three plus hours from Bellingham!)   Prior to this latest hearing, Attorney Hildes had submitted a well-reasoned “Motion to Dismiss” to the Court and he came prepared to argue for an official dismissal of the charges against Scott.  The (Persecuting/)Prosecuting Attorney, Andrew Toynbee requested more time to examine this first motion, so a new hearing date was set for the Motion Hearing, November 26 (the Monday after Thanksgiving).  The time has yet-to-be-set, but presumedly, the hearing will begin at 9 am, (again at the Thurston County Courthouse).  Watch the blogspot for updates, but, barring unanticipated changes, there will be another pre-Hearing Support Vigil (with signs and such) starting at around 8:15 am. (Please come well-dressed for the weather!)  On the current schedule, we’re now anticipating another pre-trial hearing on 12/12, and the trial itself should begin in February, 2013.  (It will last perhaps a week or more.)

Excitingly, Attorney Hildes let Scott and his supporters know he is now in conversation with the Federal Department of Justice regarding this case and they have expressed a keen interest in possibly pursuing it further.   Larry has also suggested that “Letters” to ‘those other papers’ (yes, even The Daily Zero and other print media!) may prove beneficial in nudging this case towards a just, positive outcome.

Letters to the elected County Prosecutor (Andrew Toynbee) and to Scott’s Prosecuting Attorney (Jon Tunheim) could also be worthwhile.  Both of these gents are reachable at: 2000 Lakeridge Dr. SW,  Building 2, Olympia, WA 98502.

(Hokey as it may seem to some, Scott still remains fairly-convinced that prayers and good wishes make a difference, too!)

At the close of our recent meeting, Scott repeated his heartfelt thanks for the community’s continued love and support.

We shall overcome (someday!)

Next:
The trafficking of foreign ESL teachers in China It…