The pride and certainty of the high, delighted, voice delivering this pronouncement demanded I lift my eyes from the Tugboat Annie’s menu in my hand and meet the triumphant ones of the young child beaming at me over the high back of the connecting booth’s seat.

One arm was hooked over the back of the booth, balancing her tallest tippy-toed reach, to offer me, palm-up, a colorfully foiled ovoid that did, indeed, look just like an egg; albeit one leaking a bit of chocolate goo onto sticky fingers.

And then, because one must play along under these circumstances, I asked, oh, so slyly, “Chicken?”

Glee widened her smile even brighter, and she stretched up her neck, dutifully responding, with a crowing call:

A startled silence surrounding our two booths resulted in some murmurings and a Momma’s Voice commanding, “Sit Down!” that my young friend ignored with a frown, and a poochy-mouthed pout only an irritated 3-year old can achieve.

The egg was gone by then, leaving melted bits of colorful, brown-rimmed, foil in her plump palm while her mouth and tongue maneuvered around chocolate.

“SIT DOWN!” Momma’s Voice commanded. And she did, in a slow slide so that smiley black eyes, followed by her grin, then her gooey hand, and finally her riotous auburn curls, disappeared behind the booth, leaving only a glimpse of a listing butterfly barrette before total invisibility claimed her.

Almost immediately my lunch companion joined me and we ordered. Her birthday present was prominently placed on the table—Young shoots of Lovage growing from a 4-inch pot I’d bought from the Evergreen State College Organic Farm stand.

Our order had just been placed on our table when up popped the 3-year old, craning her caramel-colored neck and pointing a French-fry at the leafy-topped plant visible over my friend’s shoulder.

She looked me square in the eye, determined to resume our naming game.

A windy, “Ffff-uh-ERN!” puffed from her mouth.

She popped the French-fry in her mouth, chewed, swallowed, considered. And then, framing her sweet face in her cupped hands, she gazed at me with utter, devoted, tenderness, and crooned softly:

“Wuv ooh too, wittle bee.” In a cadence that could only have been a mimicry of her mother’s loving voice.

It’s May. Greeting cards and so many advertisements demand we shop for and about, our mothers. Let’s just thank our mothers, those women (biological mothers and others) who gave us a loving nest from which to grow. As a community, local and global, we must also give thanks to the many women who grow our food, especially those nearby. You’ll see them at the Farmer’s Market. Thank them! Here’s the local farm map: http://www.communityfarmlandtrust.org/2016-direct-sales-farm-map1.html

According to the Food & Agriculture Organization (FAO)

Women play a decisive role in household and national food security. In rural areas – home to the majority of the world’s hungry- they grow most of the crops for domestic consumption and are primarily responsible for preparing, storing and processing food. They also handle livestock, gather food, fodder and fuelwood and manage domestic water supplies. In addition, they provide most of the labor for post-harvest activities. Worldwide, women’s work often goes unrecognized, and, worldwide, women lack the economic and political leverage necessary to gain access to resources, training and finance.

On a global scale, women produce more than half of all the food that is grown. This number has not changed by any significant amount in over 100 years. In sub-Saharan Africa and the Caribbean, they produce up to 80 percent of basic foodstuffs. In Asia, they provide from 50 to 90 percent of the labor for rice cultivation. And in Southeast Asia and the Pacific, as well as in Latin America, women’s home gardens represent some of the most complex agricultural systems known.

The US Department of Agriculture’s Economic Research Service (USDA-ERS) reports that the number of women-operated farms more than doubled in the 25 years between 1982 and 2007. That number is growing. Female farmers now make up the fastest-growing sector of the country’s changing agricultural landscape and nearly 1 million women – approximately one-third of total domestic farmers – list farming as their primary occupation.

ALLERGY TEA RECIPE: A Nod to my Grandmother: Doris Bell Staigmiller (1910-1976, Eden, MT) who had over an acre in “garden” production, and who cooked, canned and, froze, food for an extended family for most of her life.

Mix equal parts of the following: 1/3 organic green tea, 1/3 mint, 1/3 combined nettles, lovage. It lives in the refrigerator in a concentrated form. I drink it hot or cold, mixed 1:2 with hot (not boiling) water or sparking water & ice. I often squeeze a lemon into it. Sometimes I add red chili pepper. 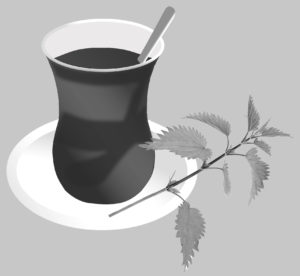 My grandmother called it, “soup plant.” It looks like celery on steroids. It tastes like what “Green” meant back when ancient gods and goddesses were mixing up plants with colors and flavors and giving them “attributes.” The etymology of the name means “Love” and enjoys a rich heritage in various languages. Choosing my own family heritage, I cleave to: Liebstöckel.

Other than nostalgia, the sight and smell of Lovage produces great comfort to those who know it. It offers important, anti-inflammatory, “attributes,” that benefit those, like me, who live in the forest and are allergic to, oh, so many, spring pollens. Lovage and Nettles, are high in many flavonoids, among them, Quercetin. The anti-inflammatory attributes of Quercetin were noted back in the days when Titans walked the earth and when Greek scholars left their sponges, chitons, and peplos behind in the baths to run naked into the streets shouting, “Eureka!” at the tops of their lungs.

Quercetin is a blood-thinner, so many cautions to those with various heart & blood ailments who swallow medications for same. Be careful here. Quercetin should not be lightly taken.

My spouse makes gallons of “Allergy Tea” for me every week this time of year: equal parts of the following mix: 1/3 organic green tea, 1/3 mint, 1/3 combined nettles, lovage. It lives in the refrigerator in a concentrated form. I drink it hot or cold, mixed 1:2 with hot (not boiling) water or sparking water & ice. I often squeeze a lemon into it. Sometimes I add red chili pepper.

The Evergreen State College organic Farm is now selling Lovage starts. Fresh nettles are now at the farmers’ markets and shooting up in pastures and forest edges everywhere. Saute them with mushrooms, shallot, and finish with lemon juice.

Wear gloves when you pick and chop nettles. Or don’t, and relish the alive needle-pins nettle leaves prick into your skin. It’s good for you. Builds character! I know someone, named Frederica (Dr. Bowcutt), who can pick nettles leaves, roll them inside-out and just pop them in her mouth with no prickles. Give it a try, but don’t rub your eyes afterwards.

For further reading, consider the following references for Lovage & Nettles. And always, always, consult, a 3-year old, for delight.

Liza Rognas is an academic librarian and a research professional, and has been a community food security activist and researcher for 20 years in Washington State.

Next:
Sanders vs. Clinton By Emily Lardner WHERE DO THEY STAND?…