Will voters remake the Olympia City Council in November?

Three stories were told about housing and homelessness as candidates vied for votes in Olympia’s primary election. All three stories will be part of the general election.

The first story comes from incumbent Council members Jim Cooper, Lisa Parshley and Yen Huynh. They say the solution to the housing crisis is to promote “more.” Whatever the market is willing to build they will help facilitate: tax exemptions for builders; infill exemptions from environmental regulations; purchase and clean-up of proposed sites and gifts of buildings. While the developers will not build affordable housing, as supply eventually increases and buildings age, the wealthier will leave and the poorer will find something they can afford.

The second story comes from the real estate oriented contingent: Spence Weigand, Wendy Carlson, Robbi Kesler and Corey Gauny. They agree that “more” housing is the way forward, but two obstacles need to be removed. First, speed up the development process. There are too many fees, regulations and delays in the land turn-over process.

Olympia has a reputation of being unfriendly to business and this needs to change. The second obstacle is the presence of the drug-addicted and mentally ill homeless people living in encampments and creating a public safety hazard in the downtown shopping core. This contingent says there needs to be a more robust police presence and the homeless need to be removed from downtown to publicly controlled sites where they can get treatment.

The third story comes from the independent candidates: Talauna Reed, Dontae Payne, Tyrone Brown, Sarah Destasio and Bruce Wilkinson, Jr. They think the City pays too much attention to wealthy builders. Marginalized, working poor and working class people who rent need a voice on the City Council. They want the City or some public entity like a housing authority to build affordable housing now and protect renters from predatory practices.

They see a connection between the City’s promotion of unaffordable downtown housing and the increase in homelessness. They don’t want to normalize encampments, but they say inadequate wages and rises in the cost of living and rent contribute to homelessness. They want permanent housing solutions to keep lower-income people housed and in our community.

A high turnout, and onto the general election

The City’s voters responded to these stories with a high turnout in the primary, casting 13,933 votes for a 37.6% turnout of the City’s 37,038 registered voters. The number of voters is well above the approximately 11,000 voters who participated in the 2019 primary. In addition, more than twenty of Olympia’s precincts had a higher participation rate—between 40% and 54.8%.

The results for the primary election have become clear. Incumbent Jim Cooper and Spence Weigand will face each other. Incumbent Lisa Parshley will face Talauna Reed. Incumbent Yen Huynh will face Robbi Kesler. In the race for the open seat vacated by Renata Rollins, Dontae Payne will face Corey Gauny.

Voters support an incumbent and a real estate agent

The Cooper, Weigand, Brown race. Incumbent Jim Cooper, on the Council since 2011, is the longest serving Council member. He has the endorsement of current Council members Gilman, Madrone, Parshley and Rollins. Spence Weigand is a long-time real estate agent for Virgil Adams Realty. (Although tenant organizer Tyrone Brown came in third, his underfunded campaign attracted a surprising 2,524 votes on an expenditure of $1,620.)

On the central issue of housing and homelessness, both Cooper and Weigand ran on a platform of “more” housing. Cooper has voted for every eight-year tax exemption for downtown market rate apartment buildings. He also voted for the West Bay Yards project on Budd Inlet which Weigand also supports. In fact, Weigand’s real estate agency helped broker the West Bay sale. Weigand and Cooper both support the “missing middle” upzone, but Weigand feels the City “enables” homelessness. He’d like to see a “higher law enforcement presence” and believes the City creates too many barriers to the rapid approval of more housing developments.

Cooper, on the other hand, raised $23,530, one-third of it from organized labor. The UFCW gave the most, followed by the Central Labor Council, Fire Fighters, State workers, Carpenters, Teamsters and SEIU. His other $1000 contributors were the Progress for Public Safety non-profit run by Jason Berman and Alex Christiansen. Brandy Helms also gave $1,000.

In the primary, Cooper was the victor in 32 precincts scattered across the City’s four quadrants. Weigand won 21 precincts, more than half of them in Southeast Olympia. Three of those were in the Southeast’s largest precincts (48, 09, & 35) located east of Boulevard Road and in the Ward Lake area. 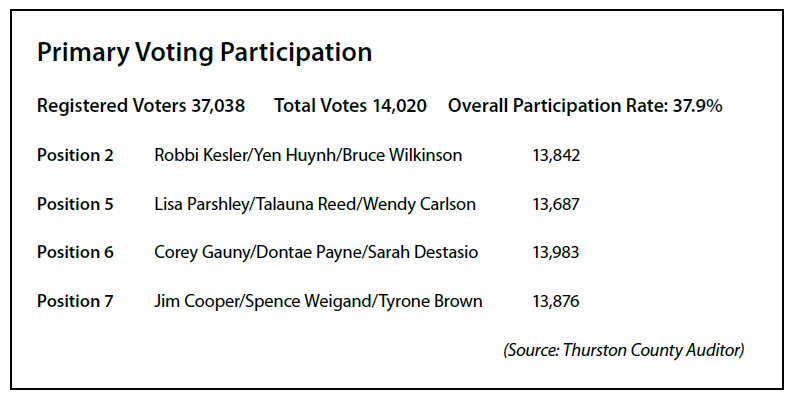 Another close primary yields an incumbent vs an independent 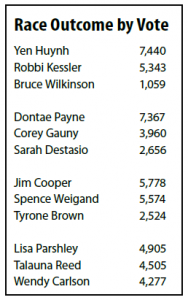 The Lisa Parshley, Wendy Carlson, Talauna Reed race. Like the Cooper/Weigand race, this primary was also close. The three candidates were separated only by a few hundred votes, as Reed won 22 precincts, Parshley 18 and Carlson 12.

Lisa Parshley is seeking her second four-year term. Like Council member Cooper, she voted for eight-year tax exemptions for market-rate apartments in downtown Olympia, voted for the West Bay Yards development and voted to gift a burnt-out building downtown to a developer using the state’s “poor and infirm” language, plus granting him a 12-year tax exemption. She has the support of fellow Council members Cooper, Gilman, Madrone and Rollins. She raised $27,828 including $5,000 of her own funds and $6,400 from organized labor: Teamsters, Fire Fighters, UFCW, Central Labor Council and State workers.

Wendy Carlson is not a part of the real estate industry, but nonetheless has their support. She received endorsement and funding from the Washington Association of Realtors Political Affairs Council and the Master Builders Affordable Housing Council. She also received financial support from Prime Locations’ Zach Kosturos; Dennis Adams from Virgil Adams Realtors and fellow candidates Spence Weigand and Corey Gauny. 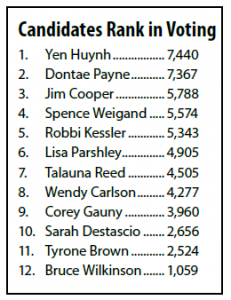 She raised $25,920 (just $1,900 short of Parshley’s $27,828). Carlson’s top priorities were helping the unhoused with drug and mental health resources, creating a police force people can trust and “modernizing the building process.” All but two of her twelve winning precincts concentrated in the SE, much like Weigand’s. She lost to Talauna Reed by 228 votes.

Talauna Reed is a representative of the independent forces in this campaign. She distinguished herself from both Parshley and Carlson by focusing on the wealthy themselves. She doesn’t want Olympia turned into a “playground for the wealthy” and wants developers to “pay their fair share.” She opposed the West Bay Yards project, wants to create a City Housing Authority that will build permanent housing for the homeless, to create “renter protection policies” and to establish a landlord registry to monitor “predatory practices.” She also wants funds directed to the Crisis Response Unit via “meaningful cuts” to the police budget.

Reed was endorsed by the Thurston County Democrats. She raised $14,700 in individual endorsements—$13,000 less than Parshley—yet won the most precincts, spread among all four quadrants of the City.

The Yen Huynh, Robbi Kesler and Bruce Wilkinson, Jr. race. Incumbent Yen Huynh easily won the primary race with 7,440 votes, the highest vote of any primary candidate, winning in forty-three precincts. Huynh, appointed to a ten-month term in January 2021 to fill the seat vacated by Jessica Bateman, is seeking her first four-year term. She, like incumbents Cooper and Parshley, voted in support of the West Bay Yards project and voted to use the State’s “poor and infirm” provision to subsidize a developer. She also wants to “seek more pathways to reduce homelessness” and “strengthen police accountability.” She raised the second highest amount of all candidates, $28,462. $4000 came from two individuals in Springfield, Illinois and $4,600 came from organized labor: Central Labor Council, UFCW, Teamsters, SEIU and State workers. The rest was from individuals.

Robbi Kesler, a real estate oriented candidate, came in second to Huynh with 5,343 votes. Kesler received the endorsement and financial support ($1,000) of the Washington Association of Realtors Political Affairs Committee, but her largest contributions came from her own donation of $2,500 plus $4,750 from tribal councils. These councils included the Jamestown S’Kallam, the Skokomish Tribal Council, Tribal Self Reliance, the Nisqually, Muckleshoot and Squaxin tribes.

Kesler stated her position on housing and homelessness in her application for the seat that Huynh was appointed to. She wants to “increase the availability of affordable housing” and create “more business-friendly” development requirements. One of her three main goals is to “address the public health issues associated with existing encampments of homeless persons, including a plan to remove trespassers from private property.” She believes that in conjunction with other local governments the City should “move the homeless population to government approved public sites.” Eight of the 10 precincts she won were in the Southeast, the same as those won by Weigand and Carlson.

In this race, the independent out-polled everyone

Dontae Payne, Corey Gauny and Sarah Destasio. Dontae Payne was the clear winner in this contest to fill the seat vacated by Renata Rollins. He was endorsed by every member of the City Council,Governor Inslee and his boss,Congresswoman Marilyn Strickland. He raised a total of $23,133 with the largest contributions from his partner, Jason Weigold ($2,000) and organized labor ($4,400).

He received 7,367 votes, the second highest of any candidate. He beat Corey Gauny, the second place winner, by 3,407 votes and Sarah Destasio by 4,711 votes. Payne won every precinct but two.

Payne wrote that two of his priorities were Housing/Homelessness and Public Safety. He stated that increases in the cost of living, poverty and rising rents contribute to our homeless and houseless issue. With over half of our residents as renters, he agreed that it is getting more expensive to live here. He wants to “monitor the pace of home rental rates” while pursuing “missing middle” housing and expand the City’s Crisis Unit Response. He acknowledged that the community wants significant reform within the Olympia Police Department. He is in favor of body cameras, but opposes defunding the police which he has called “a convenient distraction from white supremacy.”

Corey Gauny will face Payne in the general election. Gauny is running in line with Weigand and Kesler. He wants to change the City Council because it “has failed to address the homelessness crisis competently, protect public safety or help make housing more affordable.” His number one priority is safety for the residents in neighborhoods, the downtown and parks. He wants to get help “for those struggling with substance abuse disorder and mental health” because they make up the “greatest number of offenders.” He also believes that the root cause of homelessness is mental illness and substance abuse. In addition, while he supports the right to protest and civil disobedience, “the destruction of businesses and vandalism will not be supported by me.”

Gauny raised $18,745, including $1000 from the Washington Association of Realtors Political Affairs Council and another $1000 from the N.W.P.I. LLC a real estate management corporation governed by Fred, Eric and Chris Carlson. His largest contributors were Fred and Barbara Finn ($2,000) and their three LLCs for a total of $2,850. Gauny also received $500 from the Teamsters Legislative League.

The general election will be even busier than the primary with a total of five seats up for election, now including a contest between incumbent Clark Gilman and challenger Candace Mercer. All three of these narratives will still be present and up for vote: incumbents, real-estate oriented and independents.

Dan Leahy is a frequent contributor to Works in Progress. He also wants it noted that he contributed $500 to Talauna Reed’s campaign. 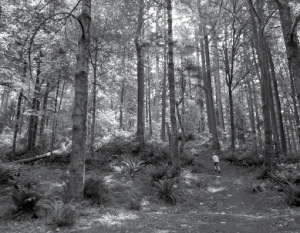