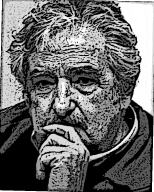 “We grow, but we distribute”: Uruguayan President Jose Mujica’s advice to the US

Architecture and memory
The White House is a building with a nefarious reputation within the South American left. Since the Monroe Doctrine in the early 1800’s, its walls and chambers have been mute witnesses of numerous decisions meant to convert the region in “our back yard”—meant to guaranty endless Latin-American economic dependence on U.S. interests, without much concern for the political forms believed necessary to secure this favorable equation.

Against this background, it did not matter, as Frank D. Roosevelt stated in reference to Nicaragua’s Somoza, if a brutal “son of a bitch” dictator ruled the continent as long as “he is our son of a bitch.” By the end of the 1970’s and 80’s the marriage between U.S. capital interests and their subservient allies among the Latin American right had proved fertile and fruitful; our sons of a bitches in military uniforms ruled most of the continent. The union was more prolific than the Brady Bunch.

Having been a member of the Tupamaros during the 70’s—an armed urban guerrilla resistance movement against the dictatorship—having been shot many times and having spent fourteen years incarcerated by pro-Washington military administrations in Uruguay, it wasn’t surprising that a journalist would ask Jose Mujica about his reflections when visiting the White house. He responded: “Buildings are not to blame, I am not to pick a fight with architecture, I choose to forget because what I am interested in is the future”

Architecture and the commodification of policy
Washington DC’s architecture is eclectic. Many of its forms are evocative of ancient empires (Egyptian, Greek, Roman) and although its buildings and monuments are affected by urban regulations limiting their height, the space they occupy clearly makes visible to visitors, particularly from other countries, that this is the city where the center of power (at least) in the West is located.

The United States Chamber of Commerce is situated on 1651 H St., right across Lafayette Park from the White House in a beautiful Beaux Arts building. It is listed in the National Register of Historic places but is not ranked high in the priority list for most tourists. According to the official web page, the three-story Corinthian columns and Indiana limestone surface of the exterior “reflect the Chamber commitment to solid, traditional American values, while the interior public rooms and space reflect the organization’s dynamic forward-thinking mission.”

Since its insertion in 1912 as an organized response to labor, with over three million members including the estate subsidiaries, the Chamber is the largest, probably most powerful, and best organized lobbyist organization representing business and trade associations in the nation. Since 2002, according to the Center for Responsible Politics, the Chamber has continually spent almost twice as much, and in some years three times as much, as the next higher spenders including the National Association of Realtors, General Electric, PG&E Corporation, Exxon, Pharmaceutical Research of America, AT&T, AARP, and Philip Morris for the tobacco industry. In 2013 for example, the Chamber spent 74,470,000 million dollars in lobbying activities followed by the National Association of Realtors, which spent 35,584,580 million.

The Official Chamber page does not offer an explanation of what the grandiloquent “solid traditional American values” means, or how they may be different from let’s say, traditional Canadian values, or traditional German values, or traditional Central American values, or traditional South American values, or when and how they became solid and traditional for that matter. What we do know is that the majority of its electoral contributions went to support Republican candidates that denied the scientific foundations of climate change; to support Corporate Globalization Rights and outsourcing; and to oppose the following legislation: financial regulations, the DISCLOSE Act which investigates foreign investments in US electoral processes, and the Health Care for America Act. If the aesthetic imagination of the exterior serves any functional purposes, these are clearly the interests of an extremely wealthy capitalist class able to buy legislation to the detriment of the majority of people of this country. The U.S. Chamber of Commerce was the second building visited by Jose Mujica in Washington DC.

Another possible world
Although it is not unusual for foreign leaders to speak at the Chamber, the presence of a Marxist president like Jose Mujica may appear to many as a diplomatic anomaly. Ironically, on the other hand, it reflects the results of a new reality that has taken place in Latin America and cannot be ignored: the emergence of a significantly large number of democratically-elected governments consciously searching for alternative forms to capitalism, neoliberalism and globalization. With local national variations, we witness the following governments seeking independent ways to regulate their own economies: Argentina, Brazil, Chile, Bolivia, Uruguay, Ecuador, Venezuela, Nicaragua, Cuba, and to a lesser extend Peru; they have created a continental progressive front that challenges the aged and dysfunctional U.S. hegemony in the area.

In the words of the well-known Uruguayan writer Eduardo Galeano, these emergent new forces “are struggling to create another possible world—traveling against winds and storms and, at times, against all evidence”. But evidence was not scarce when Mujica addressed the Chamber of Commerce. During his administration Uruguay has taken remarkable steps favorable to the social and economic well being of the people. Among many other things it is worth mentioning the following: The poverty index diminished from 39% to 11%. The country’s yearly economic growth index is 4%, one of the highest on the globe. The minimum wage has increased 250% in the last nine years with an increase of real consuming power of 54%. As Mujica indicated to the audience present at his talk in the U.S. Chamber of Commerce, “ in Uruguay we grow, but we also distribute”.

There is a radical contrast between the reality of this small Latin American country and the expanding inequality that characterizes the U.S economy where prosperity is designed to benefit a parasitic 1% of its population.

The Marlboro Man’s blues
Uruguay’s success is not limited to economic growth. Under Mujica’s administration abortion has been de-criminalized, same sex marriage became legal in August of 2013, and in the same year Uruguay became the first country to legalize and regulate the growth and use of cannabis. Uruguay also has one of the most severe regulations against cigarette trade and consumption, which prompted the Philip Morris Corporation (noted above as one of the largest lobbyists in the U.S.) to sue the Uruguayan government alleging the regulations have a negative effect on its right to profit from the sale of cigarettes. But as Mujica (an ex-smoker) expressed to Obama (another ex-smoker) in the Oval office, the fight against cigarette consumption transcends private litigation, because “in the world per year eight million people are dying from smoking. And that is more deaths than World War I and World War II. It is murder. We are in an arduous fight—very arduous—and we must fight against very strong interests. Governments must not be involved in private litigation, but we are fighting for life.”

Freedom and the size of a prison cell
During his visit to the White House Mujica also discussed with Obama Uruguay’s willingness to admit five Guantamo Bay detainees out of more than seventy cleared by U.S. intelligence and security agencies yet still remaining in Guantanamo without legal cause. The negotiations about this issue were seen as a contribution to human rights on Uruguay’s part, and as an opportunity for the Obama administration to resuscitate the six-year-old electoral promise to close the detention facilities in Cuban territory. Although at the time of this writing the negotiations have concluded successfully, the main obstacle was the Obama administration’s demand that Mujica would guaranty that the detainees “won’t leave Uruguay.” A few days ago when asked about this issue Mujica had this to say: “They will be free men. My government will not control their movements.”

Freedom seems a hard concept to grasp for the Obama administration—their demand essentially meant extending the size of a prison cell from a few square meters to the size of the Uruguayan nation. Mujica rejected the request/demand of a paranoid government accustomed to the illegal surveillance and movement control of its citizens, and overseas friends and foes.

On governments and human happiness
Much has been written about the legendary austerity of Mujica’s life as a president and as a citizen. He has given up living in the Presidential Palace and lives with his wife in a humble house in the outskirts of Montevideo. He donates 80% of his presidential salary to housing programs. He refuses to use official transportation and drives his own beat-up Volkswagen beetle to work etc. There is no doubt a strong, unique and exemplary correspondence between his political beliefs and his everyday life; most importantly is his conviction that “development is not to be measured by the totality of wealth but by human happiness.”