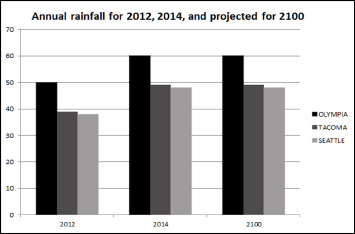 “Global average annual precipitation through the end of the century is expected to increase, although changes in the amount and intensity of precipitation will vary by region;” states the Environmental Protection Agency under climate change on the Federal government website. “Washington can expect an increase of ten inches of rainfall annually by the end of 2100;” informs Dr. Susan Digby, Professor of Geology at Olympic College, with confidence. Indeed, Washington has already seen ten inches more rain than this time last year.

Can present infrastructure, like storm water drainage systems, handle the increased load? The current self-evident answer is ‘yes.’ So far, this year, Seattle and Olympia haven’t seen flooding in their streets. “King County is at the forefront of drainage systems, not just at the local but global scale;” exults Will Pedey, spokesperson for King County Storm water Services. After the last two years storms, landscape drainage systems were installed.

One of the biggest problems facing Puget Sound is polluted runoff according to Mary Wohleb, a King County project manager; “We’re able to take the polluted storm water out of the system, filter it and keep it from going into the local waterway.” Which is good, because Tacoma could use some friendly advice. Posted phone videos document the November ninth’s stormy ending of the Seahawks game at Tacoma’s Stadium Bowl. There was a reported vehicle accident due to street flooding, no one was seriously injured and the perceived problem was leaves clogging grates. But the waters don’t just come from the sky.

Remember, December 17 of 2012, when record setting high tides flooded Seattle by 14.51 feet and we were warned, “Yesterday’s tide would be an everyday tide by midcentury,” by meteorologist James Rufo-Hill of Seattle Public Utilities? The answer will be a multifaceted approach combining moving, raising and protecting facilities, according to the groups head, Paul Fleming.

While government agencies are preparing homeowners can too. Rainwater catchment systems litter YouTube with detailed information on filtering and calcifying for household use like showers to yard maintenance like seasonal creaks or millponds. Since increased precipitation will result in decreased snow, harvesting your own water isn’t just an exercise for the overzealous. A study by Marketa Elsner and other University of Washington researchers suggested a decrease of 27 percent water available from Cascade snowpack by 2020. Decreased snowmelt with require cities like Seattle to consider municipal water source alternatives. It could be a good thing that demand for that resource will likely decrease.

By utilizing berms and vegetated swales rain gardens can become interesting features in a yard. The splash of color offered by irises and canna lilies will cut down on the splash suffered by the grass. If not flowers, elephant ears; variegated varieties offer distinction while soaking up more rain than sun and are impervious to both. A gravel path could wind around like a prayer maze, reminding of the different perspectives afforded by a few steps.

Having permeable surfaces instead of concrete is recommended and lining what concrete is present with gravel ditches will also save soil the trouble of running off. Deterred by too much digging? One willow tree can absorb over 20 gallons of water a week. Unwilling to give up your view for a tree? Ostrich ferns and creeping jenny are short and chartreuse, with golden blooms creeping brightly along the ground.

Rocks are also a viable option for minimizing water impact. Like dry stream beds, rock gardens can take a beating and hold their own. Can People?

There are those who are “not optimistic;” like Nancy Anderson, MPh MD a professor at Evergreen State College who suggests that “things have to get really bad before people [are willing to change].” Anderson’s concern over weather refugees in need of shelter from flooding and landslides is valid. Sometimes the measures taken to prevent the worst wont be enough. It will be important to keep up moral; suggested student of environmental studies at Evergreen, Emily Stanislaw.

While previous flooding has resulted in current preparedness by counties and cities, individuals can also play a personal part. Plants can’t plant themselves in cement. Let’s continue efforts to save paradise from the parking lot. “Get outside…bicycling!” suggests Stanislaw. Ultimately, we are capable of dealing with climate change; one drop in the bucket at a time.

KIra Sabini, a college student pursuing a career in medicine as a general practitioner, would like to contribute to making the world a better place.