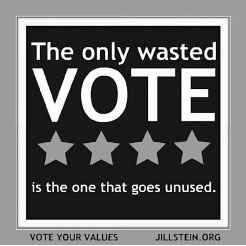 I was inspired by Ralph Nader’s Green Party bid in 2000.  He talked openly about the two-party “duopoly” and how corporations controlled the policies of both major parties from the top down and, not infrequently, from the bottom up.  When I read the Green Party’s website for the first time in December 1999, I realized that my values had evolved to the point that I felt in alignment with the Green Party.  So I joined and became a local organizer, focusing on the Nader campaign.  He was generating excitement with tens of thousands attending his rallies.  In the end he got 2.7% of the popular vote (around 3 million) and we (the Green Party) were blamed for Gore’s presumed loss  in Florida (actually, when all the votes were finally counted, Gore had won).  People should not have a choice, they said, in who they vote for.  We were labeled ‘spoilers’ for getting in the way of their sham democracy.

When I was in the Green Party from 2000-2008 I learned firsthand why Ralph Nader called our political system a “duopoly”.   It’s basically a closed system where the two parties share the power and don’t let anyone in to disturb that power.  Our political system is completely rigged against any competitive ‘bidders’.  We live in a two party dictatorship.  No outsiders will be allowed to threaten their mutual hold on power.  Political power can become intoxicating!  Most politicians are addicted to this system and feed off of it throughout their careers in politics.

It would be quite possible to switch to a voting system like Instant Runoff Voting that allows three or more viable parties, but the Ds and the Rs will not hear of it.  They would rather lose elections through “spoiling” than allow a third party to live.

Bernie Sanders learned the power structure early on in his career and determined not to challenge it. That is the main reason he decided to run in the Democratic primary.  That’s also the main reason he endorsed Hilary Clinton against Donald Trump after he was defeated by the DNC’s ‘dirty tricks’ (Wikileaks!) and the mainstream media (Super Delegates count!).  And why he refused to even consider Jill Stein’s offer to become the Green Party presidential candidate once he ‘lost’ the DP primary.

Being a lifelong independent leftist/socialist

Since my early 20s (I’m 65 now) I had never even considered joining the Democratic Party (DP) until Bernie decided to run against Hilary.  I joined the local Bernie campaign, became a Precinct Committee Officer in the Democratic Party and made it thru the state party convention as a Bernie delegate. The whole process, from organizing the precinct caucuses, to the Legislative and Congressional caucuses, county convention and state convention were, for me, maddening, demoralizing and highly frustrating experiences.  They felt like exercises in futility, disorganized, dysfunctional and with very little time left at the end for any meaningful discussion, debate or genuine dialogue on the issues that confront us all.

In spite of all that, Bernie’s call for a “political revolution” galvanized the support of millions during the primary process, especially millennials and Gen X’ers, but also a lot of older folks, especially Boomers like myself, who had long been aware of our corrupt corporate dominated two party system.

And make no mistake about it the Democratic primary was heavily rigged in Clinton’s favor—from use of ‘unpledged’ Super Delegates by the mainstream media to bolster Clinton’s “lead”, to the closed primaries, wasted provisional ballots, exclusion of independent voters and younger voters,  burdensome state party registration rules (different in each state), drastic reduction of polling sites, as well as documented evidence of voting machines that were rigged to ‘flip’ votes to the other candidate and outcomes that were in wide variance from the exit polls which are touted as the standard used to verify clean elections.

And in spite of it all, Bernie still won the primaries in 22 states with around 13 million voters casting their ballots for him.  He garnered 46% of the pledged delegates.

As shown in a recent report by a group called Election Justice USA, there was clear and direct election fraud in up to 11 states, which were crucial for Hillary’s victory. Their report indicates that had the elections been conducted fairly and democratically Bernie would have won an additional 184 pledged delegates—putting him in the lead going into the Democratic National Convention:   2070 for Sanders to 2021 for Clinton.  That would have been a game-changer, forcing the Super Delegates to vote for the winner of the popular vote or be seen as the establishment backers that they (mostly) were.

But it was not to be.  On July 12, two weeks before the start of the contested Democratic National Convention, and true to his word, Bernie officially threw in the towel and endorsed Hillary as the party’s nominee, which caused immediate consternation and demoralization amongst his supporters.  This led to a major split in his movement with the majority of his supporters either leaving the movement or going over to the Green Party to help with the Jill Stein campaign with the remainder following Bernie’s lead in supporting Clinton against Trump.

Jill had invited Bernie to consider joining her at the TOP of the Green Party ticket but he never so much as returned her calls.   So Berners began in mass to ‘DemExit’ (leave the Democratic Party) and join Jill’s side.  She was seen as the continuity of the ‘political revolution’ that Bernie had advocated.  Many millions felt betrayed by Bernie from that moment on.

Jill’s popularity on social media went through the roof in the weeks that led up to the Philly convention—with social media hits up over 1000% and with ‘Bernie or Bust’ers contributing $500,000 ($1 million including federal matching funds) to Jill’s campaign that same week.  Thousands switched over and helped Jill get on the ballot in pending states.  She went from being on the ballot in 23 states in mid-July to 47 states by early September with another three—Kentucky, Nevada and North Carolina—having disqualified her with burdensome legalistic maneuvers by Democratic operatives.

Meanwhile, the nationwide effort to build support for the Jill Stein/Amaju Baraka campaign bodes well for the short-term growth of the Green Party.  Whether this growth spurt will carry over into the next period, lead to greater diversity in the party rank and file or lead to more GP candidates running for office in the near term is uncertain but likely.

In any case, chances are better than at any time in the GP’s history to influence millions of voters in the direction of forging an alternative politics to the two-party system.  And Jill is firmly rooted in the party whereas Nader was not beyond the election of 2000.  She will provide leadership to the national party for years to come and a new, more diverse, leadership will emerge.

The Green Party passed a resolution for the first time at this year’s convention declaring itself “eco-socialist” which should help with an effort to work more closely with groups like Socialist Alternative.

Kashama Sawant of Socialist Alternative, and the first elected Socialist to the Seattle City Council in over 100 years, is endorsing Jill Stein’s campaign and is pushing to build the movements that could lead to a mass based independent anti-capitalist “party of the 99%” to challenge the two-party dictatorship and to challenge the coming reign of Hillary Clinton.

When the Green Party’s percentage at the ballot box reaches 35% or 40%, the Ds and Rs will be forced to get on board with a better voting system, one that does not cancel out all the votes for the party that comes in third.  But that’s not likely to happen until one of THEM will be the one coming in third.

To get involved with the local Green Party of South Puget Sound’s Jill Stein campaign, go to www.gp-sps.org and join us!  Also, please join our local (public) Facebook page at www.facebook.com/groups/gpsps.  We have monthly meetings and our members are involved in and supportive of a number of issues based campaigns.  Our focus thru November 7, 2016, will be on getting out the vote for Jill Stein.  We are the party that is dedicated to political, social, environmental and racial justice. Join us!

Chris Stegman is a long-time member of the local Green Party.

Next:
That vintage illusion called Vari-Vue where you tilt the printed…