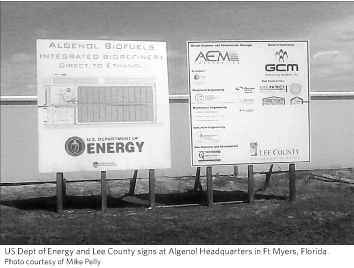 Company throttles back promising biofuel at point of commercialization

Are we seeing another variation of a promising technology being squashed before it even gets to see the light of day? Is a vital technology being tossed aside just as it was becoming commercially viable after nine and a half years of development?

Is Algenol going the way of the Tucker automobile, the Pogue or Ogle carburetors, Rudolph Diesel or Tesla›s many contributions to electrical energy distribution?

Gasoline prices have been at the level they are now many times in the past nine years. Why be deterred now by low gas prices when this new technology is on the verge of finally bringing in revenue?

Algenol’s process uses carbon dioxide recovered from exhaust gasses to feed algae grown in salt water circulated inside transparent plastic tubing suspended in sunlight. The sunlight and carbon dioxide react in the algae ph0tosynthesis process and allows for the algae’s expotential growth. As the algae matures it turns into ethanol (8,000 gallons per acre, per year) and is collected. The process itself also desalinates the salt water into fresh water. The sludge left over from the cyanobacteria bio reactor is then ‘cracked’ in a process similar to one used by the petroleum industry to refine crude oil. This additional step produces an additional 400 gallons of gasoline, 400 gallons of diesel fuel and 400 gallons of jet fuel. One ton of CO2 in Algenol’s process is enough to produce 144 gallons of biofuel.

Water desalination, carbon capture, safe and abundant fuel oil with no farm land required. Is this cure to many of our woes being snuffed? I have no doubt this is not about the technology being not ready or the current low gas prices.

Algenol’s two primary investors from Mexico and India decided to cease commercialization of their algae derived biofuels citing low gas prices. These changes were announced about a month after Algenol’s CEO Paul Woods negotiated a business arrangement with a Florida fuel distributor to blend Algenol’s algae-derived ethanol with regular unleaded gasoline blends, which use 10% ethanol. Also in September, Woods met in Seattle with a trade delegation from China and started the process of utilizing Algenol’s carbon capture into biofuels technology in China.

This change in plans comes as a big surprise as Algenol had announced a while back of opening a large commercial algae-to-bio fuels bio reactor and refinery in central Florida near their Ft. Myers headquarters sometime in mid to late 2015.

Noting low gas prices was the only reason given for Algenol’s sudden decision to hold off on commercial ethanol and biofuels sales and redirecting their resources to further develop Algenol’s related water desalination and carbon capture for the foreseeable future.

In a Biofuelsdigest.com story covering this sudden course change, CEO Paul Woods who tendered his resignation in meeting just before Algenol laid off 25 percent of workforce, expressed his thoughts on the recent events. He was careful to characterize his words as “not” speaking for Algenol,

“Ed can do that now, these are just my personal thoughts.” [Woods was referring to Ed Legere, co-founder of Algenol]

Mr. Woods wrote that “Algenol is headed in a new direction, and that won’t include me.

“Truth is I was never able to convince people outside of Algenol that carbon reduction was needed.

“Many governments, companies, institutions and people talk a good game about helping our planet, but none of them are willing to put in a dime to back that up. Hopefully, starting with Paris in December, the next two years will change rhetoric into action.  Are we going to do something about climate change or not? I hope the world catches up with Algenol in seeing the need for carbon mitigation is now, not 10 years from now.  Fancy accounting doesn’t remove carbon from the atmosphere we all share.

“Alex Gonzalez should be applauded for being the original visionary who has back Algenol year after year.  He has a strong commitment to helping our planet and climate change mitigation and he backs that commitment with real money.  He has committed even more support for Algenol ensuring at least two or more years of funding guaranteed, so the amazing work i started will continue and be seen through.

“I continue to want Algenol to succeed, and my co-founder Ed Legere has been elevated to COO, so I know Algenol is in good hands along with Dr. Paul Roessler and Dr. Ron Chance.

“Algenol will continue to push Carbon Capture and Utilization (CCU), using its current and very successful Direct to Ethanol platform to help companies lower their carbon footprint, while producing new sources of fresh water for countries and regions in such desperate need for fresh water.

“A new focused CCU Algenol will work diligently over the next 2 years to finalize and further develop its system adapted primarily for carbon capture and fresh water creation.  Low cost fuels cannot continue to be the sole focus of Algenol, we live in a new reality of low oil prices, low demand and abundant supply.”

During the Second World War, important ideas and technologies for winning the war became by law, property of the US Government because they were of vital public interest. Algenol’s technology is vital and developed here in USA with some of our tax money. Do we need to nationalize Algenol in order to implement this vital technology to combat global climate change? Or should it be made legal for others more motivated to commercialize Algenol’s patented technology if Algenol doesn’t follow through on opening a commercial operation fairly soon?

I fear a representative from Old Oil might have visited and could be offering some incentives and “advising” the remaining crew and board at Algenol to change their course this late in their product roll out phase. One can only hope this is not the case.

Mike Pelly is a resident of Olympia and works with high school students. He has been a developer and proponent of renewable energies for decades. Mike can be contacted at mikepelly@zoho.com

Next:
A need for adequate child care provided in a financially…