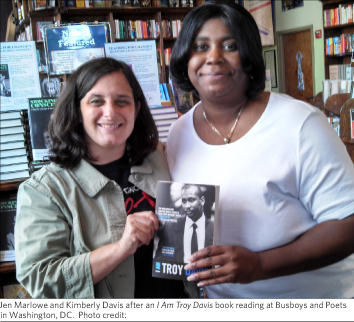 ACLU of Southern California on April 8, 2014

An interview with Kimberly Davis and Jen Marlowe

In 2011, the ACLU stood in solidarity with millions of people across the country in demanding clemency for Troy Davis. But despite our appeal, on September 21, 2011, Troy was executed.

Two years later, our collective efforts to challenge the death penalty in the name of Troy Davis and others like him have been anything but futile. Since Troy’s execution, nine states have taken steps to repeal the death penalty, including two in the Pacific Northwest. Here in Washington State, Gov. Jay Inslee announced on February 11 that he was imposing a moratorium on executions as long as he was governor of the state of Washington.

“Equal justice under the law is the state’s primary responsibility,” Inslee said during his press conference. “And in death penalty cases, I’m not convinced equal justice is being served.”

On Wednesday, April 9 the ACLU of Washington will co-sponsor “I Am Troy Davis: The Human Face of the Death Penalty, ” two events hosted by The Evergreen State College (TESC) at 3pm and at Orca Books at 7pm.

The events, which are also co-sponsored by Fellowship of Reconciliation-Olympia, the Washington Coalition to Abolish the Death Penalty (as well as multiple academic programs and student organizations at TESC, and the President’s Diversity Fund) will feature a discussion with Troy’s younger sister, Kimberly Davis, as well as Jen Marlowe, author of the recently released book, I Am Troy Davis, which Marlowe wrote with Troy’s older sister Martina, with Troy’s direct participation.

The ACLU of Southern California recently interviewed Kimberly Davis and Jen Marlowe for its blog, about Troy’s case, how it helped galvanize the movement to abolish the death penalty, and what work lies ahead.

ACLU: Where are we two years after Troy’s execution?

Jen Marlowe: Troy’s case really sparked an awareness about why the death penalty is so problematic in this country, and I think in the two years since there’s been a lot of really concrete steps that have happened that have moved our country progressively away from use of the death penalty—and certainly, I can’t say that that’s only because of Troy, it’s obviously not, but I absolutely think it was one of the galvanizing events in the abolition movement. That was one of the things he called on his supporters to do in his final words—he asked us to continue to fight this fight, and I think that he would find that we have, and that we’ve been very successful in it.

Kimberly Davis: I feel really good knowing that my brother’s case is continuing to change the world today. Troy told the family if the State of Georgia did succeed in executing him they would only take his physical body because he gave his soul to God along time ago.

ACLU: How have people responded to your brother’s story?

KD: My brother’s story has opened the eyes of many people across the world and has brought people of all origins together to work for one cause: to end the death penalty. It doesn’t matter the color of someone’s skin—we all came together to stand for one cause and continue to stand for that cause. People all over the world had their eyes on Troy’s case and if they didn’t understand the importance on ending the death penalty then, their eyes are opened wide now.

ACLU: How does the death penalty affect minorities and people of color?

JM: The death penalty dispropor-tionately affects minorities and people of color. Every study that’s been done in every state has affirmed that. It has to do with both the race of the perpetrator and the victim, as people of color are far more likely to be prosecuted with a capital charge than people not of color.

The race of the victim particularly impacts whether a death penalty is sought for an offender. If the victim is white, it is far more likely than if the victim was non-white. These are some really troubling indicators in this day and age of whose lives are considered more valuable and whose lives are more dispensable. Race and the death penalty have very troubling overlays, as do economics and whether or not someone has the opportunity to hire decent defense or has a public defender, who might be very good but nevertheless overworked and underfunded.

The nature of the crime is rarely what determines whether the death sentence is sought. Race, geography, and poverty are much more indicative factors, and that’s really troubling in the country that is supposed to stand by the central edict ‘equal justice under the law.’ The death penalty seems to be the sharp edge of a much larger, broken system, and it certainly does not provide equal justice.

JM: I think we’re building up to a repeal of the death penalty in the United States. It’s been happening step-by-step and state-by-state—momentum is growing and I think we’ll reach a tipping point, where as we continue to move, there will be a point where the rest of the country will follow—whether that will ultimately come from the U.S. Supreme Court or another way, we’re trending very clearly in that direction. In terms of repeal on different state levels, I live in Seattle—of course, the governor of Washington just did the moratorium—and then also if you just look at trends about the death penalty: prosecutors are seeking the death penalty less often, there’s fewer death sentences being imposed, there’s fewer executions, public opinion of the death penalty is at an all-time low according to Gallup—every single indicator is moving towards repeal, which is not to underestimate the amount of work that we have ahead of us.

ACLU: Kimberly, what changes do you hope to see?

KD: I hope to see the death penalty end all around the world and that we can come together to make sure there is not another innocent man executed. Not in my name.

Additional question: What do you think of the moratorium on executions instituted by Gov. Jay Inslee here in Washington State?

Continue the discussion with Kimberly Davis and Jen Marlowe at one of the two Olympia I Am Troy Davis talks and book signings on Wednesday, April 9! See announcement on page 2 for locations and times.

Next:
That's right, friends, like all of our troubles, gravity comes…