The next phase of our long-haul struggle for a radically different world will be extremely ugly and extremely consequential.

The danger we face

The special danger stemming from the 2016 capture of the Republican Party by white nationalism and Trump’s drive toward a racialized authoritarian state has given rise to a surge of popular resistance. That outpouring has combined militant street protests with large-scale electoral engagement. The GOP’s loss of control of the House of Representatives this year and Republican losses in various state contests puts some check on the administration’s capacity to implement its agenda. Breakthrough victories by numerous progressives – including many women of color and several socialists – along with increased strength in the social justice movements that pushed them forward are signs that the US left is emerging from years of marginalization.

But the racist Right still holds the main levers of national power. The Trumpists remain determined to hrestructure society in ways that have huge negative consequences for the vast majority of people in the US, but especially for those most disadvantaged and vulnerable. Key elements of their agenda include:

♦   Reversing gains made by women over the last 40 years with special emphasis on attacking abortion rights;

♦ Stacking the judiciary with right-wing toadies and undermining what remains of a free press;

♦ Demonizing immigrants and putting in place policies that will simultaneously ensure a cheap labor force blocked from fighting for its rights and provide Trump’s “base” with a dehumanized scapegoat to blame for their continuing hardships;

♦ Abandon diplomacy in favor of military force and give aid and comfort to racist authoritarian regimes and leaders worldwide.

No one should underestimate the danger of this package. It adds up to imposing an “everything-for-the-Rich” economic arrangement and a semi-apartheid “solution” to the “problem” of a growing people of color population via an authoritarian regime. If the Trumpists retain power the US might retrain the trappings of democracy, but it will lack any of the substance.

Resistance to every aspect of this agenda will be needed in the streets, on picket-lines, in the courts and in the battle for public opinion for the next two years. This day-in, day-out confrontation will build to the 2020 election, where ending GOP control of the White House must be the top priority both for minimizing further damage and preparing a new cycle in which progressives can start driving the country’s agenda.

The growing strength and maturity of today’s social justice eco-system offers hope of meeting this challenge. The progressive wing of the anti-Trump majority consists of a loose alignment of social justice organizations rooted especially in communities of color, and among youth, women, the labor and environmental movements, and the LGBTQ community. This sector threw itself into the 2018 electoral fray in ways not seen since the Rainbow Coalition/Jesse Jackson surge of the 1980s. It infused the anti-Trump motion with dynamism and inspired record numbers to vote against the GOP. Here’s a small sampling of the character and scale of activity that provides a foundation to build on:

♦ The Texas Organizing Project (TOP), with its strong base among Latinos and African Americans, went all out in the most populous red state. TOP deployed at one time 575 staff, reached 882,000 voters, knocked on 300,000 doors, and was key in flipping two congressional seats and electing three DAs, putting Texas squarely on the map in the fight against mass incarceration.

♦ The progressive state table in Florida, which ranges from the Dream Defenders to Florida New Majority and SEIU, pushed through Prop 4, which restored voting rights to 1.4 million formerly incarcerated people.

♦ Collaboration between the Working Families Party and New Georgia Project in Georgia, the leadership in parts of Stacey Abrams’ campaign by people from the Movement for Black Lives Electoral Justice section, the fact that the National Domestic Workers Alliance deployed the largest independent field operation in that state – all this energized young voters and re-energized veterans of the 1960s Civil Rights Movement.

♦ Nationwide the work of Our Revolution, the National Nurses Union, Color of Change, fast-growing Democratic Socialists of America chapters, the Movement Voter Project and other groups reached millions with messages that went beyond the need to defeat Trump to demand such advances as universal health care, a living wage of at least $15/hour for all, a thoroughly restructured criminal justice system, free college education and a leap forward in ending sexual and gun violence.

Beyond galvanizing an electoral blow to the racist right, these efforts inspired hope and political engagement among millions of low-income people. They increased the independent strength of progressive organizations and expanded the boundaries of what it is possible to fight for and win in 2020 and beyond.  On-going political work that stems from these efforts includes:

♦ The campaign for a Green New Deal promoted by Alexandria Ocasio-Cortez, Since her dramatic step of joining a sit-in at Democratic House leader Nancy Pelosi’s office this campaign has gathered steam nationwide. The latest push is for labor not just to join but to play a leading role because it aims to avert climate catastrophe at the same time it offers the potential for a massive increase in good-paying jobs and more unity among workers from all backgrounds.

♦ The ongoing work of the Poor Peoples Campaign led by Rev. William Barber fighting the “three great evils” identified by Dr. Martin Luther King – racism, poverty and militarism – as well as battling climate change. And beyond its state-based pushes on voting rights, a living wage and other issues, the Campaign projects a “Third Reconstruction” vision that taps into one of the deepest strains of the struggle for freedom stretching back through the “Second Reconstruction” of the 1960s to the gains of post-Civil War Reconstruction before they were rolled back by Klan terror and the systematic disenfranchisement of African Americans.

♦ The push for Medicare for All which has been embraced by significant sections of the labor movement, long-time single-payer advocates, Democratic Socialists of America and numerous community groups. This demand has now “gone mainstream,” winning backing from scores of Senators and Congress people including every likely contender for the 2020 Democratic Presidential nomination.

♦ The grassroots campaigns on education, criminal justice reform, immigrant rights, a domestic workers bill of rights and more that have long been central to the work of community and workers’ rights organizations (such as the Texas Organizing Project, Virginia New Majority, the National Domestic Workers Alliance and the nationwide community organizing networks – Peoples Action, Center for Popular Democracy, PICO, Center for Community Change). Most of these, and other groups, are building off the lessons learned, larger base and new allies gained from participation in the 2018 midterms to expand week-to-week non-electoral organizing and accumulate strength for greater efforts in the pivotal 2020 balloting.

This exciting social justice motion operates in a complicated environment. The special danger posed by Trumpism mandates making its defeat our prime task, which requires building the broadest possible vote-against-the-GOP alliance. Many in this alliance are “moderate” voters, open to but not yet won to a consistent agenda of worker empowerment, racial and gender justice and peace. Others – mainly a layer of corporate Democrats – are our political enemies. That means even as we are allied against Trumpism, there is contention among us over what agenda and message should predominate in the fight against our common enemy, which constituencies are most crucial to victory, and more.

With the stakes so high, no arena of struggle can be abandoned. Given the structural constraints of the US winner-take-all, two-party system, defeating Trump means contending for the Democratic ballot line in Democratic primaries and voting that ballot line when the general election rolls around. Until such time as progressives win deep reforms in the electoral system and/or can ourselves become a “first or second party,” this is the only practical path to defeat the far right and solidify a base among the millions who see Trumpism as a mortal threat.

To successfully navigate that path, we need to build up organizations like those mentioned above, controlled by and accountable to a grassroots progressive base. It is crucial to strengthen cooperation between such groups as Our Revolution, Working Families Party, the National Nurses Union and other progressive unions, state-based organizing formations that have roots among workers and communities of color, the nationwide community organizing networks, 350.org and other key social justice groups. Together these already influence tens of millions of people. They constitute the building blocks of what can be an even larger progressive bloc with the potential to reshape local, state and national politics.

Max Elbaum is one of the editors Organizing Upgrade, where you can find articles elaborating on the points made here. He is  author of the recently re-released Revolution in the Air: Sixties Radicals Turn to Lenin, Mao and Che. 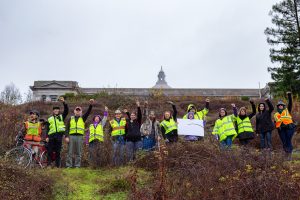