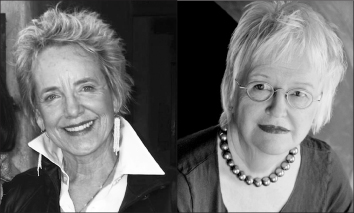 Transforming Terror: Remembering the Soul of the World

Essayist, poet, and playwright Susan Griffin and co-editor Karen Loftus Carrington were in Seattle recently to read from their anthology, Transforming Terror. The book is a response to the events of September 11, 2001, and to the US government’s subsequent actions.

Terror both creates and results from terrorism.  So terrorism—which Griffin described as acts of violence against unarmed civilians—cannot be stopped by creating more fear. Instead, the solution must arise from thinking unlike the thinking that originally created the problem. Acknowledging and interrupting the cycle of terror, terrorist violence, and then yet more terror, is the point of the book.

“Art embodies things, makes them concrete, makes them sensuously vivid so you can experience them,” Griffin said. “One of the things that allows people to kill each other is abstraction; the killer cannot imagine the suffering he or she is causing.” But when we engage our imaginations, Carrington added, “we begin to scan for connection rather than difference, [and] then the heart begins to open.”

As an introduction and guide to relevant writings—and to thinking about terrorism from the perspective of its aftermath, terror—Transforming Terror is well worth reading. The search for new and healing perspectives led Griffin and Carrington to choose writing from a wide range of cultures and sources. Contributors range from well-known activists—Martin Luther King Jr, Vandana Shiva, and Desmond Tutu, among others—to such poets as Carolyn Forché, Nellie Sachs, Theodore Roethke and William Stafford. Some unexpected names appear, including those of St. Thomas Aquinas and Herman Melville of Moby Dick fame, to go with those of more contemporary thinkers and writers (among them Susan Sontag, whose piece as excerpted here begins and ends with Olympia’s Rachel Corrie; and including Joan Didion, Leila Ahmed, Fritjof Capra, Wendell Berry, Mahmoud Darwish, and Václav Havel.) Sources appear in the Credits section for readers who want to pursue selections in their original context, or to read excerpted selections in their entirety.
I found the compendium of short sections taken from Rebecca Solnit’s book Hope in the Dark to be particularly bracing. Solnit explores several ways in which hope can follow on despair. “Threats and atrocities” call out resistance, and new organizations and movements are born. People educate, organize, take chances and together prevent a watershed’s destruction or the spraying of deadly poison; as they plan the first action, no one involved knows what eventually will happen. The abolitionist movements started by Quakers in England did result in the end of slavery—some seventy-five years after the work began. US women’s rights efforts growing out of abolitionist movements in both England and the US initiated some seven decades of continued advocacy before bearing bearing fruit in the form of women’s right to vote in US federal elections; Susan B. Anthony and Elizabeth Cady Stanton did not live to celebrate the result of the risks they took. “Activism is not a journey to the corner store,” Solnit writes, “it is a plunge into the dark.” To take that plunge, we need only the imagination to see things differently than they are at present.

The experiences of others, when attended to with care, can ignite that imagination. In addition to overview observations provided by Solnit and others, Transforming Terror presents stories of survivors and observers. Greek activist and poet Yannis Ritsos, in a poem entitled “Afternoon,” describes a day passed grieving for those killed as being “a difficult color made up of old footsteps halted in mid-stride.” In a piece first published in 1892, US journalist Ida B. Wells documents the fact that reporters of her time did not always record even the names of African Americans hung by lynch mobs, let alone bother to investigate the crime; I found myself thinking about the ways our times are different—and the same. Radical feminist thinker Robin Morgan describes the subjective effects of seeing every surface  “plastered with homemade photocopied posters, a racial/ethnic rainbow of faces and names” as she walked near the World Trade Center after 9/11, a horror that awakens my own memories of newscast and Internet images during those days.

Stories told from the heart allow others, in Griffin’s words, to “face the full catastrophe of grief, fear, and rage.” When listeners’ responses are compassionate, people are brought together through the bond of shared humanity. Communities must acknowledge and witness publicly, Griffin noted, embracing and understanding the shared quality of tragedy and suffering, because individual healing is tied to the healing of a community and even an entire society. Recognition that others suffer, and how, is a start. “Social change including political change,” as Griffin said, “comes when people change.”

Previous WIP articles by Joli Sandoz won two Washington Press Association awards. She buys books from as many independent bookstores as possible, and urges you to join her.

Next:
Medievalist poses as champion of “modernity” Ed. note: This…