Toward a more just world

As truth seekers, we trudge through youth and try to learn the ways of this world. We see a messed up world and wonder how thinking humans continue to tolerate the ridiculous state of affairs. Our common sense tells us that we can have a much better world —a world where no one is hungry and unsheltered.

We breathed a sigh of relief when the UN was organized, thinking that at last we will have world peace, no more wars. We truly can settle conflicts without war. Such an arrangement has worked in the USA with their various states and a central power with clout to maintain peace and justice among the various states. Yet, we sadly watch as powerful nations ignore the UN if their wishes conflict with UN efforts to maintain peace. 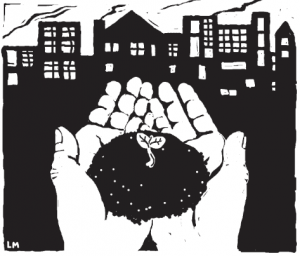 We become heartsick when we see our own country that started out with such high ideals, become just another greedy empire builder, trying to rule the world through military and financial power. The world needs no more empires. Let us build a world of nations that live by the rule of law. We must organize an international institution with clout to enforce laws mutually agreed to by the majority of people of the various nations. Either amend the UN charter to give it the clout to hold trespasser leaders in check or replace it.

We start by changing our own mindset to cooperate and share rather than compete and beat. We must conscientiously try to love our neighbors, even those misguided souls who have become afflicted with the greed disease and who would destroy us to keep their power. We must build alternatives to provide for our vital needs, simplify our lives. We must get out of debt as that has become another means of enslaving us. We must escape the rent hogs by generating alternative housing such as community owned housing that charges only for depreciation and upkeep. By doing this we will break their power over us.

Organized commercial gangs must be brought under control for the common good. If corporations get too big for governments to control or we cannot afford to let them fail, they must be taken into public ownership, regulated for the common good like public utilities or broken down to manageable size. International corporations must be brought under control and regulated by an international institutions such as the UN or its replacement. Profits are not a sin. Look at nature with her abundant profits. One small seed creates a tree that produces year after year and charges nothing. Nature does not create scarcity so that profits will rise. Ownership in the hands of a few over the many is the problem.

Personal initiative to create goods and services must be encouraged as it keeps our creative juices flowing. We must make some adjustments when quantity of wealth takes away from the many to benefit the few. We can bring this under control and it can be solved at change of generations and by a progressive income tax. Any legacy to an individual that exceeds $10 million should be taxed at 99% to benefit the common good. Resources of this world are here for all life. Why should individuals own enough for a thousand lifetimes and other people go hungry and unsheltered? Foundations that are shams to retain family or corporate control of assets must be abolished.

As the old saying goes, “There is no free lunch on this earth.” Our right to be here is the service we render to each other. We cut out the frills until everyone on earth has food, shelter, healthcare and education worldwide. If world population has grown to exceed the ability of earth to sustain it, we must place limits on population. Until the excessive population can be brought to a sustainable level, no woman should be permitted to have more than one living child. Do this for two or three generations and we will solve the problem. Our communities must set aside resources to provide for older workers and those unable to work or for unseen emergencies. We must put more land back in the hands of individual farmers, who are willing to take steps to rebuild our soils in cooperation with nature. Mega agriculture with their chemical fertilizers and insecticides have been a disaster for mother earth and are destroying our soils in the name of temporary profits.

No one owns the earth; we only hold it in trust. If this trust is abused to the loss of future generations, corrective controls must be taken. The future belongs to us all, not just those with money and power. We are all born with a sovereign soul, so let’s take our power back and place some limits on the power of excessive wealth that becomes abusive.

Food, shelter and healthcare must no longer be treated as commodities to be manipulated for profit. They must be regulated like utilities to benefit the public or the public should own them. We need inspector generals, elected by the public, to oversee our public offices and to assure that our elected people are serving the best interests of the people, rather than large commercial interests.

Big private money invested in our political system has corrupted our democratic process and must be stopped. Excessive political contributions must be taxed severely for the common good and be shared by all candidates. Campaign time must be limited to 60 days prior to elections so we get full value of the work of our elected representatives. All entities that use our public airwaves must be required to designate 20% of each of their timeslots 60 days prior to election for public exposure of those running for office as a royalty for the use of our airwaves.

A system of Fascism, the partnership between big business and government that we do not openly admit, has crept upon us. This must be broken up. We cleaned up Hitler and Mussolini of their Fascism and is now time we must take on the Fascist partnership between our large corporations and our government.

We must develop a better system with right of recall and replacement of representatives who betray us once in office. We vote for and elect them, but once in power, they fall under the sway of lobbyists and their big money backers. We must check this by taking the power of money out of our elections. The Supreme Court changes this or we change the Supreme Court.

The US with only 5% of the world population has 25% of the world’s prison population. It is obvious that our criminal justice system bears looking into. Incarceration, when necessary, is the duty of our elected representatives, not private enterprise for profit. We need inspector generals elected by the people to oversee police and prisoner abuse.
Justice is not be a commodity to make a few lawyers rich. Lawyers and judges, as officers of the court, should be compensated as civil servants. There should be inspector generals, elected by the people that have the duty to assure that these officials are competently performing their duties. All legal problems should be settled by courts with the loser paying a modest filing fee for both. Our present for-profit legal system permits the rich to buy their way out and the poor go to jail, lose, or are executed. In a democratic free society this is obscene and must be changed. We all must stand equal before the law regardless of wealth, race or religion. We must put our best minds to work and start making the necessary changes, uncorrupted by big money. Life is sacred, money and wealth are but a convenience.

We must resolve in our own minds that a better world is possible. We will no longer accept an unjust system just because that is the way it is. We start by making changes in ourselves and doing the things within our own power to improve the world for all. We organize and put the pressure on our elected representatives and government officials to take action and start correcting the abuses against humanity and our environment, regardless of the power of big money. We will no longer tolerate their non-action if they want our continued cooperation and support and to be re-elected. They cannot rule an unwilling majority because without our support they are powerless. Sure, they may kill a few of us like the Czar did before the Russian Revolution. When they take this approach rather than correct their abuses their replacement will come. Remember the Bastille.

Some may say these ideas are unrealistic. All great movements and changes are considered unrealistic in the beginning. Look at the idea that humans might one day fly like the birds, let alone reach other planets, or we might see events taking place thousands of miles away while they are occurring. What secrets and mysteries of this vast universe we may yet discover if we do not let greed destroy us first, and that we must not do. We can and will have a just society.

Part Cherokee, Evans spent his early youth on a small farm during the Dust Bowl days of the Great Depression in Wewoka, Oklahoma. Lived in Seattle 54 years and now resides in Olympia, Washington. Worked in a lumber mill and operated a mining company and co-produced a movie, Christmas Mountain—The Story of a Cowboy Angel with Mark Miller and co-starring Slim Pickens. Early on he wanted to become a great rich writer, but was sidetracked for twenty years by the advice of a wealthy uncle to “go where the money is.” He pursued the career of stockbroker and investment banker and became owner and president of a securities firm with three offices and forty brokers. Founder of PoetsWest, Activists for a Better World and Glenn Kay Evans Farms, Inc., currently hosts PoetsWest at KSER 90.7FM, a nationally syndicated weekly radio show. He has written six books of poetry, six community histories, three novels, Broker Jim, Zeke’s Revenge and Wayfarers-Where No One Is an Outcast. Works in process consist of a novel, The Last Lumber Baron, plus a book of short stories and a book of essays. In addition Evans has written numerous political essays.