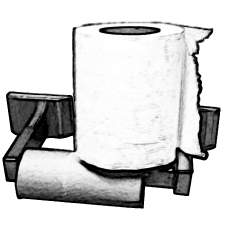 Toilet paper and its discontents: class struggle and the Venezuelan Revolution

The power of symbols

A society without toilet paper is a society in trouble, we all agree with that. Not having access to such a basic commodity of modern life suggests an uncomfortable place where scarcity reigns, futile long lines at supermarkets with empty shelves, wide spread poverty, unhappiness on citizens’ faces, and that third world “je ne sais quoi” not recommended by Condé Nast Travel standards. But equally important, if we believe that a society doesn’t have toilet paper, the actual relationship between our beliefs and material reality becomes irrelevant.

Iconic symbols, as we know, have the power to construct immediate meaning in our brain. But as Nietzsche noted long ago, symbolic constructions (and access to toilet paper is high in the chart of the contemporary mind) generate relations of things to one another, and to us, but not necessarily with the absolute truth. It is not accidental, as we’ll see below, the broad news coverage in mainstream media given to the shortage of toilet paper in Venezuela, and the supposed popular discontent against the government. For those without voluntary amnesia about moments of Latin American history, the current campaign—0first against Chavez and now against the new democratically elected Maduro–resembles in both tactics and content the campaigns against Allende in Chile prior to the establishment of the dictatorship of Pinochet.

Very few things in life can be placed outside the correlations of power and class interests in a given society. This is particularly true if we analyze the process of production, distribution, and consumption of commodities. Needless to say, TP is part of this economic cycle; tracking the “toilet paper blues” will help us unveil the real political content behind the current Venezuelan situation.

It is worth noticing that the nationalization effort initiated by Chavez has only affected a limited number of companies, mostly big companies such as the oil and other energy related industries. Most of Venezuela’s industry continues to be in the hands of private capitalist entrepreneurs.  The paper, and more specifically the TP industry is in hands of private capitalists; so are the means of transportation such as trucks, etc.; and most of the centers of distribution such as large supermarkets, are owned by private companies.

Yes, there was a scarcity of TP in Caracas, but the shortage was artificially created with the political purpose of destabilizing a legitimate government. Similar tactics were used with other basic staples creating shortages of soap, flour, etc. The same political maneuvers were used in the early 70’s in Chile to project the image of a socialist government incapable of running the economy. It is not accidental that president Maduro responded by denouncing the shortage as right wing scheme, and proceeded to temporarily occupy the largest TP manufacturer in the nation, the Paper Manufacturing Company’s plant in the state of Aragua.  Along with these measures the Venezuelan government ordered the purchase of 50 millions rolls to be distributed at no cost to the population. Maduro’s decision not only debunked the shortage argument but also the speculative plans of the TP companies. Yes, very few things, including TP shortages, can be understood if we detach them from a political/class struggle analysis.

Class struggle is not good or bad per se. The answer depends on which class interests we are struggling for. Are we for the interests of the few (the multinational companies, the traditional landlords, the industrial and financial bourgeoisie); or for the interests of most of the people (peasants, workers, and the dispossessed)?

The media, as the new battle field

It would be mistaken to believe that the main battlefront of the conservative and reactionary forces of Venezuela is through financing violence and agitation in the streets of Caracas. This tactic has been proved ineffective. As noted by Ciccariello-Maher in the March 24 issue of The Nation, “ Even the ferociously anti-Chavista blogger Francisco Toro of Caracas Chronicles has argued “middle class protests in middle class areas on middle class themes by middle class people are not a challenge to the Chavista power system.” Equally ineffective have been the recent attacks of extreme right groups against universities, libraries, and cultural centers trying to antagonize the student movement that favors Chavismo.

Nonetheless, the extreme-right and conservative forces have been successful in the orchestration of an international campaign of vilification and demonization of the Venezuelan leaders, first of Chavez and now of Maduro. Latin American and Miami based news and entertainment corporations such as ANDIARIOS, GDA, and PAL along with the conservative Spanish journal El Pais have launched a well-coordinated, vicious and continuous crusade of misinformation against the Venezuelan revolutionary project.  Their tactics include the mis-use and alteration of photographic and video material and unilateral and distorted news coverage about Venezuela.  Not to be left behind, the American media has been holding hands with the Venezuelan political right against Chavez since the beginnings of the Bolivarian revolution. Nothing new here, except that this amounts to a political aggression by conscious misrepresentation with the aim to destabilize Venezuela and prepare the ground for a violent military solution.

There is something repugnant in Secretary of State John Kerry’s statements condemning the Russian occupation/annexation of Crimea. At a personal level he seems to have forgotten his role as invader in the military occupation of Viet Nam, and at a national level he also has forgotten the U.S. recent invasion of Iraq. Both countries located thousand of miles away from the U.S.

Equally offensive was his arrogant public declaration of March 12, 2014 when he practically threatened Venezuela and announced his support for the opposition and his willingness to make use of the “democratic clause” (i.e. military intervention) of the OAS (Organization of American States) against the democratically elected president of that country.  Kerry’s proposal was put to shame by 29 Latin American and Caribbean governments declaring their solidarity with Venezuela. Only the U.S., Canada, and Panama were against the declaration. When it comes to international politics Canada seems unable to think or act without the script prepared by its powerful neighbor, and Panama’s President Martinelli seems to wish for Latin America the same misfortune of being invaded by the U.S, as was his country in 1989.

The American position against Venezuela is understandable, though unacceptable. U.S. power and influence in Latin America has become weaker due in large part to progressive-pro-socialist governments like Venezuela, Ecuador, Brazil, Bolivia, Chile, Argentina, and Uruguay. From a global perspective, these countries represent, with the exception of the Nordic countries, the only existing forms of government on the planet willing to challenge capitalism and globalization.

In the particular case of Venezuela, the progressive experience initiated by Chavez has meant among other things the following:

Intentional government policies designed to improve the well being of its people. Significant gains have been made in the areas of re-distribution of the national wealth, reduction of poverty, education, heath, and civil rights for minorities.

Expansion of democracy with the creation of more than 40,000 “Communal Councils” which according to the same article in The Nation by Ciccariello-Maher incorporate “Afro and indigenous movements, women’s, gender-diverse and students groups” —in other words, groups without previous political agency or representation.

Radical changes in the conceptualization of the role of the state, which is understood as an active instrument for the benefit of the majority of the population, and not as a tool to benefit a small group of wealthy people, which was the case prior Chavismo.

Radical changes in the conceptualization of the role of the armed forces of Venezuela (Chavez was in the military), which now play an integral part in the transformation of the country and defense of democracy via participation in economic development and social projects.

Active participation in creating a new type of solidarity among Latin American countries as a practice of resistance to U.S. economic and political control.

Ironically, Maduro has confronted the multiple acts of violence, provocation, and ideological warfare organized by internal and external reactionary forces against the government with a policy of dialogue and within the parameters of the democratic institutions in place. A survey conducted last week gives him a 57% approval rate, which added to his significant victory in the municipal elections (surpassing the previous margin by over a million votes) shows the real correlation of strength within the country.

There is a poster circulating in Caracas that shows thousands of housing projects in neighborhoods located in the foothills of the city. The poster creates the image of the latent power of the multitude that has been the main beneficiaries of Chavismo: the common people of Venezuela. At the bottom of the poster there is a legend addressed to the right wing opposition. It says: “If you keep bothering us, we may have to come down.”

Next:
Oil trains pose a threat to the environment and public…