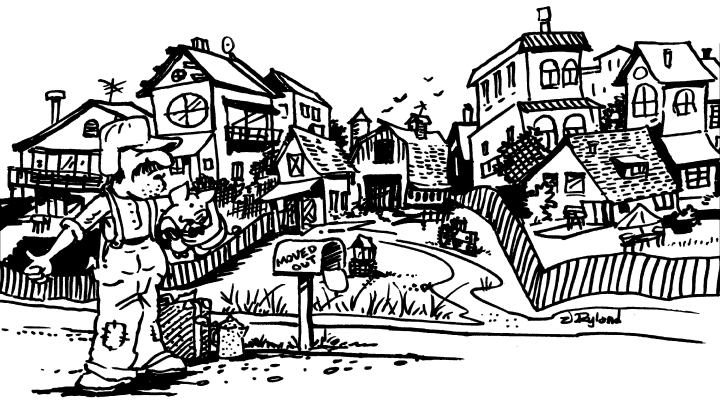 According to the American Farmland Trust, between 1982 and 2007, the U.S. lost 23 million acres of farmland to development. This loss occurred in every state in the nation, and it occurred disproportionately on the most fertile, prime farmland.

Thurston County is no exception to this alarming trend. In fact, according to WSU’s Thurston County Extension, since the mid-1950’s, Thurston County has lost over 75% of its working agricultural lands. At the same time, the population in the South Sound continues to grow, and the need for a thriving local food system has never been more pressing.

Meanwhile, the average age of farmers in the U.S. is increasing (the average age of a U.S. farmer is 58.3, according to the 2012 Ag Census). The number of young, beginning farmers is increasing too, but with farmland disappearing and property values on the rise, those new farmers face significant challenges in accessing farmland. The National Young Farmers Coalition (NYFC) has identified access to land as one of the central barriers facing new and beginning farmers. In their September 2013 report, Farmland Preservation 2.0, the NYFC calls on land trusts to prioritize not just the preservation of farmland, but the adoption of focused strategies to transfer land to a new generation of growers.

Here in Thurston County, the South of the Sound Community Farm Land Trust (SSCFLT) is uniquely poised to tackle these challenges. Based in Olympia, SSCFLT consists of an all-volunteer working Board of Directors, two part-time staff, several dozen volunteers, and a membership of about 145 households. The mission of SSCFLT is twofold: to preserve and protect working farmland, and to keep that farmland accessible and affordable for local farmers. SSCFLT’s work is predicated upon the belief that it’s not enough to simply protect farmland from development; it is critical to ensure that local farmland continues to produce food for the South Sound community.

Where does the money for farmland preservation come from? A key source of SSCFLT’s funds for purchasing farmland comes from Thurston County’s Conservation Futures Program (CFP), a land preservation program created to protect threatened land in Thurston County. The CFP funds come from a property tax levy, and can be used to either purchase land or the development rights to a piece of land. Thurston County homeowners pay approximately 3.85 cents per $1,000 of assessed property value. Since 1990, nearly $14 million in CFP funds have been invested in the community. The Thurston County Board of Commissioners allocates CFP funds on an annual basis through a grant application process. SSCFLT has been awarded funds three years in a row!

SSCFLT acquired its first farm in 2013. In partnership with Tenino based non-profit Creekside Conservancy and local organic farmers Colin Barricklow and Genine Bradwin of Kirsop Farm, SSCFLT established Scatter Creek Farm & Conservancy (located near Rochester). The property includes nearly 100 acres of prime farmland with water rights, which are owned by SSCFLT and dedicated to sustainable local food production. An additional 48 acres bordering on the Chehalis River are owned by Creekside Conservancy and dedicated to conservation for wildlife and the protection of salmon habitat and water quality.

Kirsop Farm purchased the historic farmhouse and several barns, and is leasing 63 acres of the Scatter Creek property. They currently have planted 7 acres of spring grain, and are hosting a WSU oats trial. They sowed carrots and brassicas in early July for fall harvest, and in fall, they plan to sow winter grain.

Kirsop is also collaborating with Liza Judge and Marianne Copene of August Farm to convert the property’s old milking parlor into a WSDA certified poultry processing facility. The facility will allow both farms to expand their poultry production to meet growing demand. They’ll be able to process up to 20,000 birds per year, and to sell their product at farmers markets and to local restaurants. As of July, the facility is almost complete and nearing final inspection!

Meanwhile, Rochester-based Kendra and Cory Meek and their family are leasing one of the loafing sheds on the property to raise animals for the Thurston County 4H Program. Drive by on a sunny Sunday afternoon and you’ll see local youth halter training their calves!

Other local farmers, including Wobbly Cart Farm and Flying Cow Creamery, are benefiting from the property too, leasing space in the buildings to store equipment, hay, and more. Only in it’s first season, Scatter Creek Farm & Conservancy is proving itself to be an incredible resource for the local farming community. Meanwhile, SSCLT continues to work on other acquisitions and grow its inventory of permanently affordable farmland.

In 2013, SSCFLT received Conservation Futures funds to preserve one acre of land in West Olympia, farmed by local non-profit Garden Raised Bounty (GRuB). Since 1993, GRuB has worked with youth and people with low incomes to educate, empower, and grow food. Preserving GRuB’s one acre farm will benefit the whole community by giving the organization long-term security and the ability to continue its program in perpetuity. SSCFLT hopes to finalize the GRuB acquisition in the fall of this year.

In July of 2014, SSCFLT in partnership with Capitol Land Trust and Creekside Conservancy, was awarded Conservation Futures funds to acquire another farm in South Thurston County. That acquisition is just in the preliminary phases, so stay tuned.

The last several years have been a period of incredible growth for SSCFLT, and now, more than ever, the organization needs your support. Attend an event, volunteer, become a member, or make a donation. Remember, without farmland, farmers can’t grow the tasty, nourishing foods we know and love.

Addie H. Candib is the Philanthropy and Outreach Coordinator forSouth of the South Community Farm Land Trust. To learn more about SSCFLT, go to farmsforever.org.

Next:
Dedicado a Sylvia, quien no ha nacido todavía y no…