I think back to instances where the real state of America, so flagrantly defined, stood unabashedly before us, baring itself for all to see. I often referred to my husband’s favorite sports team as “Team Xbox” which caused unrest in our home. I could not stand the corporate take-over of America, and he hated to be reminded of it.

When a sports team’s sponsor exerts so much control over them that the sponsor’s name grossly overshadows the team’s name, the relationship between the players and the money behind them is blatantly displayed. Could a person observing from afar really know which team they were rooting for? Or would they only know the corporation behind them?

What is truly preposterous is that this is happening in our political arena. Corporate money finances the politicians who make the laws that govern us. The only thing worse than blatant corporate ownership is knowing that this type of relationship exists for our political leaders, yet the sponsors are hidden behind a veil of civic mindedness and words of service to community.

Thurston County Democrats (TCD), on a late night in early June, voted to end this level of beholdeness that paves the way to corruption in local politics. While the policy change passed, it was not without contention.

The updated policy has a clause that concerned some current political office holders and candidates. Thurston County Democrats will support or endorse only those candidates who do not accept corporate money, defined as follows:

“Candidates must agree to take no corporate PAC or lobbyist money, or any contributions from the following types of companies: fossil fuel, drug, insurance, weapons manufacturers, big tech, big banks, private equity firms, hedge funds, and development and real estate corporations, and a contribution limit of $200 dollars from any officer or executive who works for these companies.”

This progressive stance answers the question of where the party’s support should be placed. This approach has already shown to be effective in the campaigns of Senators Bernie Sanders, Elizabeth Warren, Raphael Warnock, Mark Kelly, Cory Booker, and Beto O’Rourke’ as well as for Representatives Alexandria Ocasio-Cortez, Katie Porter, and Washington’s own Pramila Jayapal and Kim Schrier, among others.

Many Thurston County politicians expressed fear at the prospect of having limits on the source of their campaign funds while needing to run effective campaigns against Republicans with unrestricted sources of income. However, they might have missed the polls showing that the majority of Americans want money out of politics. While TCD isn’t saying that candidates can’t accept funds from political action committees (PAC), adoption of the new rule means simply that the Party will no longer support or endorse the campaigns of Democrats who choose to take corporate monies.

State regulations are not as stringent as TCD’s new rule, which may have increased frustrations for some. Washington State’s Public Disclosure Commission currently monitors election cycle limits for contributions from individuals and PACs to ensure that they don’t exceed certain amounts: $2000 for state executive, judicial, and Port Commissioner candidates; and $1,000 for legislative, county, city, school board, and hospital district candidates. Limits on PAC contributions to candidates in national races stands at $5,000 per primary and $5,000 per general election.

There are no limits on the amount that corporations or individuals can donate to the PAC itself. With average citizens unable to donate to this extent, it is easy to see why there is concern about entities spending large amounts of money to influence political races under current regulations.

Citizens United, a case decided by the US Supreme Court in 2010, has been corrupting politics ever since. It leaves localities with no ability to restrict the influence of PACs and SuperPacs over our elections. When the 1% bankrolls politicians of their choosing, the next step is for those politicians to rewrite our laws to favor the repeal of fair taxation and business regulations; to remove the ability for many Americans to have a living wage, accessible healthcare, affordable housing, sensible gun legislation, green energy, and equity in education.

Public funding leads to diversification of candidates and donors

One sensible solution is in place in some political arenas where public funds are provided to candidates running for office. Since 1974, the number of states offering refunds, grants, and matching funds for campaign finance has been growing. Close to home, in 2015, the Seattle Ethics and Elections Commission (SEEC), enacted a voucher program for candidates running for mayor, city council, and city attorney.

The SEEC program is funded through the city’s taxes. It gives residents four $25 vouchers that they can donate to candidates who have pledged to hold ethical campaigns. This puts the people in charge of backing candidates who most reflect their needs and concerns, and restricts the influences of corporate PACs over local elections. Studies have shown that the voucher system in Seattle improved the representation of women, BIPoC, low income and younger voters in the city’s elections and increased the amount of campaign funds coming from small donors by about 40%.

What TCD support will now mean

The step that TCD took to support the reformation of campaign finance is groundbreaking for a local party. TCD chair Jeff Sowers believes that the new policy “makes the party more relevant… allowing us to more effectively hold candidates accountable to the platform.” While it will not prevent candidates from accepting corporate donations, you can be assured that if a candidate wears the TCD logo, that candidate has vowed to represent the people and not the corporations that are widening the divide between the haves and the have-nots.

Ilana Smith is the pen name of a contributor who has laid down roots in Lacey. She is a lover of progressive ideals and the hope they embody. 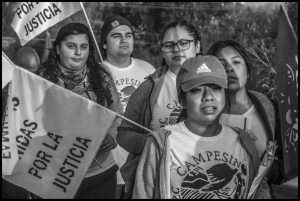