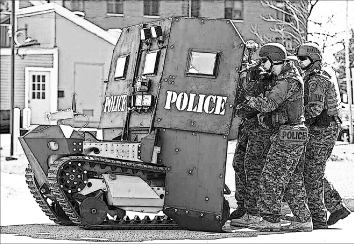 The war at home meets the wars abroad

Do you ever get a sense of déjà vu? When you get a creepy feeling that you’ve been there before, or experienced something before? On Saturday, December 13, I was marching in a #BlackLivesMatter march down 4th Avenue in downtown Olympia, Washington, with about 50 other people in the middle of the street. It was dark, cars were honking in anger or support, and protesters were chanting about racist violence, militarization, and the police. That’s when the déjà vu hit me hard.

But of course, I had heard it all before. Only seven years ago, a few blocks to the north, antiwar protesters had blocked the Port of Olympia. They were keeping armored vehicles from being shipped between Fort Lewis and the killing fields of Iraq. The port protesters were facing down the police who were protecting the military equipment, so it could be sent against brown-skinned people in a foreign land.

But now, we were marching down 4th Avenue because similar armored vehicles were being brought back from Iraq to be deployed in the “homeland.” They were being deployed for the oldest and longest war that the United States has ever fought, against black- and brown-skinned people on American soil. Instead of occupying Iraq or Afghanistan, they were occupying the streets of American cities. The militarization of the police is causing the deaths of more and more African Americans and others, so that every new police killing becomes a déjà vu of the last one.

We live in a country where not only are the police being militarized, but an overseas military intervention is officially termed a “police action.” When soldiers return from Iraq or Afghanistan, sometimes the only job they can find is in law enforcement or private security firms, and their military training causes some of them to see potential enemies everywhere. And because there are fewer jobs available in the U.S., the same kids who are harassed by cops in their own neighborhoods have few options other than joining the military to harass other kids abroad.

We shouldn’t be so surprised that the war is coming home, because it’s always been here. When martial law was declared in African American neighborhoods of New Orleans after Hurricane Katrina in 2005, private Blackwater mercenaries were flown directly from Baghdad to enforce it. When the U.S. torture chambers in Abu Ghraib Prison were exposed, it was revealed that one of the torturers had come directly from the prison-industrial complex in Pennsylvania, where he presumably had learned his tradecraft on African American and Latino inmates.

The grand jury refusal to indict the killer of Eric Garner came the same week as the release of a Senate report on the CIA torture empire that has grown since 9/11. Part of the report focused on waterboarding, a torture technique (stretching back to counterinsurgency wars in Native America and the Philippines) in which the victims are nearly drowned to extract information or confessions. In other words, the purpose of waterboarding is to prevent a person from breathing, much like the police chokehold that caused Eric Garner to gasp for air. #ICantBreathe is a statement with global implications.

We don’t know the names of most of the civilians who have been killed in Iraq or Afghanistan, or in U.S. bombings in Pakistan, Yemen, Somalia, Libya, Syria, and countless other targeted “tribal regions.” But we can better understand their suffering through the voices of the mothers of Eric Garner, Michael Brown, Tamir Rice, John Crawford, Trayvon Martin, John T. Williams, Aiyana Jones, and the countless other targets of racist killers.

We can have more empathy for what civilians face abroad by understanding this war at home, and conversely have more solidarity with civilians here by understanding the wars abroad. If repressive techniques are successfully tested on foreigners or immigrants, they are then inevitably brought back into the “homeland” to be used on citizens (as we’ve seen here in Olympia with Army surveillance of antiwar groups). And if cops and armed white citizens can commit violence with impunity in the homeland, it enables even greater violence elsewhere.

Only two hours before the Olympia youth rally, and a few blocks south at the Washington State Capitol, 1,000 gun-rights activists held an “I Will Not Comply” rally against a new voter-mandated state law for background checks on gun owners. The camouflage-clad militants openly brandished automatic assault weapons, and passed them freely amongst each other. The Washington State Patrol claimed it witnessed no violations of the law at the rally. These protesters, of course, were almost all white, and they flew at least one Confederate flag.

Whatever one thinks about gun control, let’s get one thing straight here. If a heavily armed crowd of 1,000 African Americans, Latinos, or Native Americans had protested at any State Capitol, the State Patrol would have tried to find (or engineer) an excuse to detain them. If the heavily armed crowd had been Muslim, the Army would have been brought in helicopters and armored vehicles against the “terrorists.” But because this homegrown threat was posed by white, Christian citizens, they were portrayed in the local paper merely as liberty-loving “advocates.”

The same double standards apply to wars abroad. When the enemies of the U.S. launch wars, they are “committing genocide” or “ethnic cleansing.” When the U.S. and its allies launch wars, they are “defending freedom,” or carrying out “humanitarian interventions.” Even at times when the military is called on to stop genuine dangers, it generally ends up killing more civilians and alienating its own allies. In much the same way, a family that calls the police to restrain a mentally ill relative sometimes regrets the decision, when the cops end up causing more harm than good.

The attention of the American public is moving away from overseas wars, because the Pentagon’s shift to bombers and drones, and proxy armies and mercenaries, has caused lower casualties among U.S. troops. But public attention is shifting toward the war at home, where it will be more difficult to automate or outsource the war, and it will be more difficult to hide it from evening commuters or even football fans. And if more Americans lose their faith in the local police department as our protectors, they may begin to rethink the Pentagon as our protector as well.

Since President Obama’s election in 2008, conservatives and progressives alike have declared the “death” of the antiwar movement. Strong antiwar sympathies caused a lowering of troop levels in Iraq and Afghanistan, and prevented wars against the Syrian and Iranian militaries, but could not prevent the new bombings of Iraq and Syria. Certainly the antiwar movement is not as visible or vocal as it was during the Bush years, if we only look at opposition to the wars abroad.

But if we see the upsurge in Ferguson, New York, and the entire country as opposing the racist militarization of American society and the “war at home,” the current upsurge is one of the strongest antiwar movements we’ve ever seen. It has stronger leadership from people of color than earlier movements. The movement is broadly based and deeply rooted in a wide range of local communities, and its protests have been sustained over weeks and months.

Black Lives Matter is even far more multiracial and multigenerational than earlier uprisings against the war at home, such as the 1992 Los Angeles rebellion. The youth who are taking the lead in the recent protests are not playing politics as usual, and will not easily go back to a compliant acceptance of militarization, either at home or abroad. I’ve witnessed many social movements in my years, and it just feels different this time.

Déjàvu means “already seen,” and that’s just the problem. We’ve already seen genocide and lynchings in our history. We’ve already seen kids shot down in cold blood, and their killers get promoted. We’ve already seen police and military alike trained to strike at peaceful civilians with their “hands up,” for the crime of challenging the empire, or merely for being in the way. We’ve already seen social movements blossom, get intimidated or coopted, and then wither away. But history doesn’t always have to repeat itself, because the cycles exhaust themselves and eventually hit a wall.

A tectonic generational shift is underway that we are only beginning to perceive. Upsurges—such as Occupy, Idle No More, Climate Justice, and Black Lives Matter—may either gradually release tension in the fault lines, or serve as harbingers of more intense shake-ups ahead. If, in our cynicism and fatalism, we think that we’ve “already seen” it all, we may be surprised by how quickly change can and does happen. Things will not always stay the same, and old patterns do not have to be repeated. If social movements remain brave and unpredictable, they can move mountains.

Zoltan Grossman is a professor of Geography and Native Studies at The Evergreen State College in Olympia, Washington, who has been a warm body in peace, justice, and environmental movements for the past 35 years. His website is http://academic.evergreen.edu/g/grossmaz and email is grossmaz@evergreen.edu

This article was originally published in Counter Punch and submitted to Works In Progress by the author.

Next:
The last 30 years have seen a massive redistribution of…