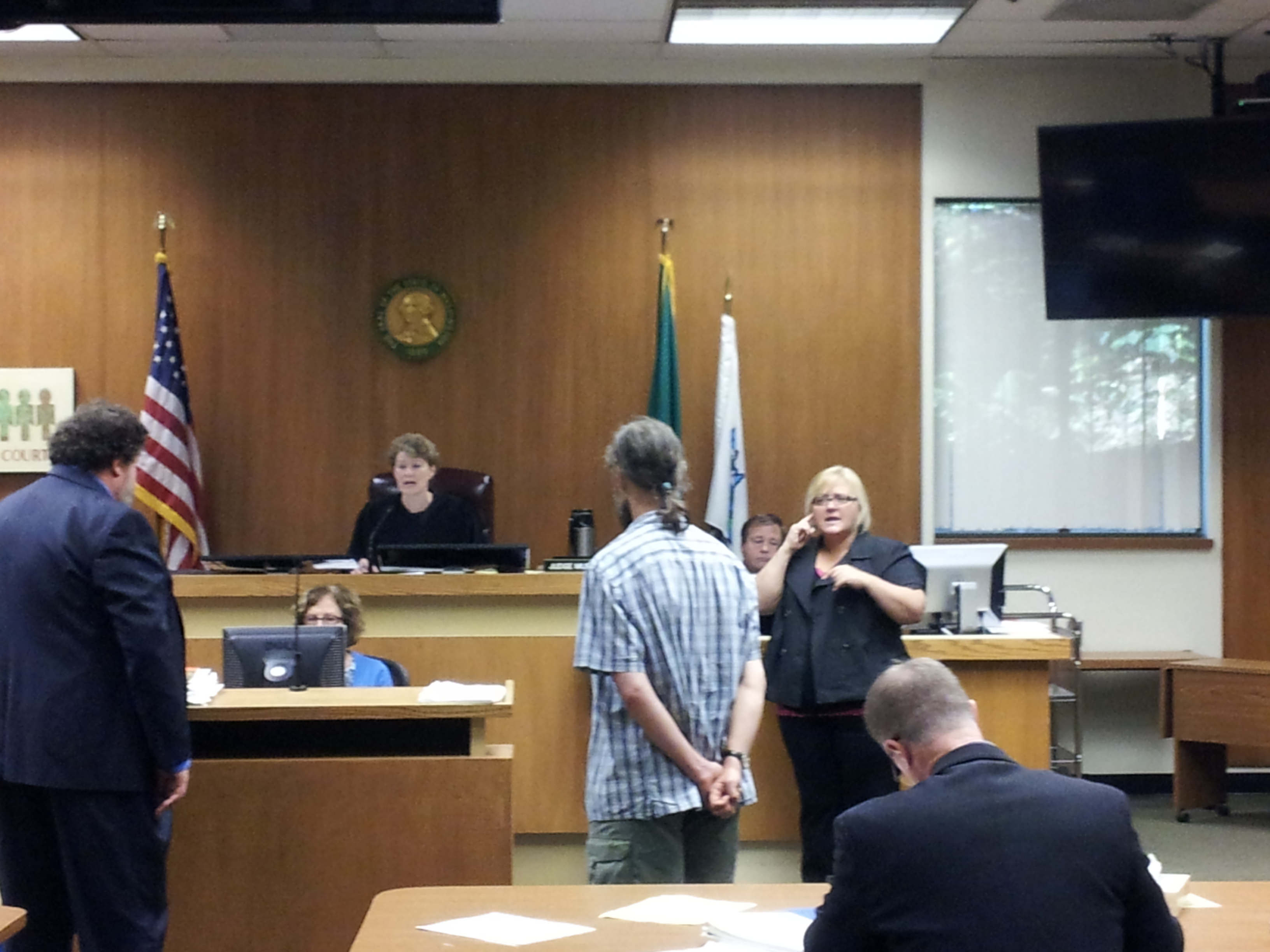 UPDATE: The legal proceedings have ended. More information has been posted at Janine’s Little Hollywood, and www.scottysupport.blogspot.com ———

[Editorial note:  This article was modified due to space constraints.]
The motion to dismiss a felony case against Scott Yoos, an Olympia man who is mute, was denied yesterday by Thurston County Superior Court Judge Christine Pomeroy.
A date of August 12 has been set for the case to now go to trial with a twelve person jury.  This date could be changed if Yoos’ attorney, Larry Hildes, asks for a delay to prepare for the case.
Case History
Accused of a felony assault against a police officer, Yoos was initially cited for criminal trespass and obstructing justice on June 1, 2011. On that date, Yoos was riding on his bicycle through downtown Olympia at 11:30 p.m. toward his home on Martin Way, when he stopped to throw some dirty napkins in a Dumpster located at 2302 Fourth Avenue, near Twister Donuts, in Olympia.
Within minutes, several officers converged on Yoos. Yoos’ method of communication, pen and paper, were taken away, and his attempts to communicate using sign language were interpreted by officers as violent behavior.  Yoos, 47,  is 5’9 and weighs about 155 pounds.
The case was bumped up to a felony after Olympia Police Department Sergeant Paul Johnson filed a report weeks after the situation, alleging that Yoos had kicked him during the scuffle. The alleged kick did not require medical treatment. Yoos denies kicking Sergeant Johnson.
Yoos’ case has dragged on for 26 months. There have been repeated delays in the case, many of them because a court-appointed sign language interpreter was not provided or available.  Larry Hildes, his attorney, has repeatedly asked the court for a motion to dismiss the case, based on discriminatory actions by the arresting law enforcement officers.
In what has amounted to several days of actual testimony in which Yoos and three law enforcement officers involved in the case testified, Olympia Police Department officers Officer Randy Wilson, Officer S. Costello, and Officer Jason Watkins, Judge Pomeroy ruled that the officers’ actions were justified, and that they had a reasonable right to stop and detain Mr. Yoos.  She further explained that their actions were not discriminatory, citing, in the court’s opinion, that it was Mr. Yoos’ repeated attempts to leave the scene that made the situation escalate.
Hildes repeatedly argued that Yoos was unjustly arrested and silenced because the officers did not have the proper training to deal with Yoos’ disability, and, after the officers made a series of assumptions, allowed the situation to escalate.
In his closing arguments, Hildes was assertive, saying in part, “Officers are supposed to deescalate situations…It became a power struggle, respect for the officers, forcing him to do what they wanted him to do and he just wanted to communicate, that’s the discrimination. But for the lack of training, experience, and policy, there would not have been an incident. Dismiss this case. But for the discriminatory result, there would be no case….”
Thurston County prosecuting attorney J. Andrew Toynbee, appearing cool and calm in his demeanor, said in his closing argument, in part, “…over three days, the officers have testified and are able to give you a reason for everything…I’m telling the court they did nothing wrong. The defendant did not wish to communicate. In fact, he kept trying to leave…when asked, he did not write his name and birthdate…they had business to conduct with him. They had a reason to talk with him…there was not a lack of training or desire to communicate…he kept trying to leave….this was a dynamic situation, things happened quickly.”
[Editorial note: Washington state does not have a “stop and identify” law requiring a person in a non-traffic stop to give name or birthdate to the police officer.]
Citing case law, Toynbee said that the officers had justification to take action and it had nothing to do with discrimination against Mr. Yoos.
Hildes argued that it was not a dynamic situation, that they were standing there having a written exchange until Officer Wilson intentionally took his pad of paper away, preventing Yoos from further communication.
“This was like putting a gag in his mouth, intentionally using his disability against him.”
Janine Unsoeld is a local writer. She blogs at www.janineslittlehollywood.blogspot.com where the article can be read in its entirety.
Scott Yoos Support Page can be found at  http://www.scottysupport.blogspot.com.

Next:
UPDATE: The legal proceedings have ended. More information has been…