The Peasant Agroecology for Food Sovereignty and Mother Earth tour 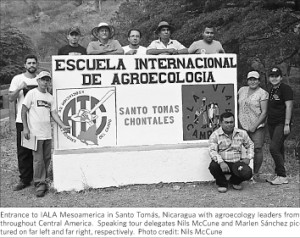 During April 22-24, 2016, Marlen Sánchez and Nils McCune of the Nicaraguan Asociación de Trabajadores del Campo (ATC, or Rural Workers Association), will visit Olympia as part of a West Coast speaking tour.  Agroecology, a form of low-input, politicized, sustainable agriculture, is seen as a key pillar to constructing food sovereignty, or the right of all peoples to define their own local, culturally appropriate food systems.  The ATC is a founding member of La Via Campesina, an international social movement made up of peasants, agricultural workers, women farmers, fishermen and women, pastoralists, indigenous peoples, and migrants around the world that coined the term food sovereignty.

Sánchez and McCune will highlight the ATC and Via Campesina’s work to construct the Instituto Agroecológico Latinoamericano (IALA) Mesoamérica, or the Latin American Institute of Agroecology of Mesoamerica in Santo Tomás, Nicaragua.  While IALAs exist in other parts of Latin America, this would be the first regional, agroecology peasant university of its kind for Central America.  Another group from Santo Tomás will be in Olympia at the same time as the ATC representatives for the speaking tour, organized through the Thurston-Santo Tomás Sister County Association.  These two groups look forward to meeting one another in the States!  Sánchez and McCune also look forward to meeting with Evergreen State organic agriculture students and local farmers through the South of the Sound Community Farm Land Trust.

Bios of the two Via Campesina delegates:

Marlen Sánchez is the National Coordinator of Agroecology for the ATC.  She was one of the first graduates of IALA Paulo Freire, located in Venezuela, and is currently the director for implementation of IALA Mesoamerica.

Nils McCune is a student and researcher in agroecology, as well as a technical team staff member with the ATC.  He represented the ATC at the International Forum for Agroecology in Mali in 2015.  He is a regular translator at Via Campesina international meetings (and can serve as translator during this proposed project).  He is also the liaison to Friends of the ATC, the sister solidarity organization of the ATC.

Please stay tuned for more details about the Olympia visit of this agroecology speaking tour at friendsatc.org, or by contacting Erika Takeo at erikatakeo.atc@gmail.com.

Next:
I was born in Kentucky on a dark and stormy…