Immediately after President Trump’s inauguration in 2017, his administration announced a harsh immigration agenda that included building a border wall, massively expanding interior immigration enforcement, and passing laws to limit lawful immigration. President Trump’s policy agenda was quickly put into action with the issuance of restrictive executive orders during his first months in office. States and immigrant rights advocacy groups have been forced to turn to courts to seek relief as the President continues to signal that his anti-immigrant campaign position is more than empty rhetoric.

Although the physical wall between the US and Mexico attracted much public attention, it is another wall that causes most concern for immigrants and immigrant advocacy groups. The administration has quietly erected a steep, invisible wall that limits migration through the use of aggressive policy moves intended to expel long-term residents of the US.

The new immigration agenda focuses on attacking the weakest, most vulnerable immigrant populations. The initial travel bans of early 2017 predominantly impacted refugees and asylum seekers. Soon after the travel bans, the administration ordered an end to the Obama-era Deferred Action for Childhood Arrivals (DACA) program that offered protection to over 700,000 undocumented immigrants who arrived in the US as children. Thankfully, courts intervened and DACA is still available, but only to participants applying for renewal of their DACA status. The rollercoaster year of court decisions that has kept DACA alive thus far is likely leading to a Supreme Court showdown.

The Trump administration also eliminated the Temporary Protected Status (TPS) protection for vulnerable groups of individuals from Haiti, Nicaragua, Sudan, El Salvador, Nepal and Honduras. TPS offers legal protection to nationals of countries experiencing armed conflict, environmental disaster, or other extraordinary conditions. Since 1990, the program has provided relief from deportation and work permits to people who were already present in the US when TPS status was awarded. Over the next two years, more than 300,000 lawfully present individuals, many of them long-term residents with mixed-status families, jobs and property, will be forced to depart the United States unless Congress intervenes. In the past two decades, hundreds of thousands of US citizen children were born to TPS beneficiaries. Ending TPS will separate families, which flies in the face of core American values.

Additionally. the administration has drastically transformed the missions of US Citizenship and Immigration Services (USCIS) and the Executive Office for Immigration Review (EOIR), converting immigration officers and immigration judges into tools of enforcement rather than impartial adjudicators. Under new guidance, USCIS officers will disregard former procedural protections and disqualify many applicants from obtaining immigration benefits. These individuals will be forced into removal proceedings before an immigration court system that sadly cannot guarantee due process. USCIS, previously an immigration benefits agency, is now an enforcement agency, conveying individuals into the deportation machine.

At EOIR, the administration has implemented policies that will undermine the independence of immigration judges and weaken due process in the court system. Immigration courts play a key role in affording non-citizens an opportunity to present claims for relief from deportation and stay in the United States. The changes adopted by Department of Justice since last year—including steps to impose numerical quotas on immigration judges and attempts to curtail procedural safeguards—threaten the integrity of the immigration courts. As of March 2018, there were over 680,000 pending immigration court cases. Attorney General Jeff Sessions has established performance goals for immigration judges to deal with the immigration court backlog crisis. Judges will be required to complete at least 700 cases a year to receive a “satisfactory” performance rating. They currently average 678 cases a year. The National Association of Immigration Judges opposes the performance goals, arguing that the current backlog cannot be attributed solely to a lack of productivity on the part of judges, and that imposing quotas and deadlines will impede justice and due process. Additionally, Sessions recently ruled that immigration judges will no longer be allowed to use administrative closure to take low priority deportation cases off their dockets.  The Obama administration attempted to reduce the court backlog as part of its broader strategy of prosecutorial discretion, spending ICE’s resources to pursue and deport immigrants with criminal records, rather than longtime residents without prior contact with law enforcement. It allowed government attorneys to request that a case be closed if it did not meet removal priority guidelines. If the immigration judge agreed, the case would be closed, and the individual would be released from further hearings. Hundreds of thousands of immigrants were offered that option. Sessions recently ruled that the entire process was illegal. As of late 2017, there were more than 350,000 individuals with low priority cases that were administratively closed. They are now at risk of having their deportation cases reopened.

Another example of the increasingly-looming invisible wall is the proposed “Public Charge” rule that will force parents to make the heartbreaking decision between using social services, such as health care, nutrition assistance or tax credits for their US citizen children, and changing their visa status or applying for permanent residence in the future. This is a radical and unconscionable attack on family values and our immigration system. The proposed rule wouldn’t make it illegal for immigrants to use services that are open to everyone regardless of immigration status, or services that are available to their US-born children. But if the rule passes, the government could deny their future applications for a new type of visa or a green card—if they have used the services in the past. It could force them to choose between taking advantage of available social services for which they or their US citizen children are eligible and their family’s future ability to stay in the United States permanently together. If approved and finalized, the regulation would vastly expand the federal government’s power to bar immigrants from entering the United States, obtain a new visa, or become lawful permanent residents by labeling the immigrant a likely “public charge.”

Taken together, these policies are slowing and restricting legal immigration to the United States, at the expense of U.S families, local communities, and employers. Our representatives must be made aware of the negative impact of these restrictive policies and urged to exert more oversight over the administration’s immigration agencies. The invisible wall must be dismantled before more irreparable damage ensues.

Steffani Powell practices US Immigration and Nationality Law in Olympia, Washington. She is a member of the American Immigration Lawyers Association. 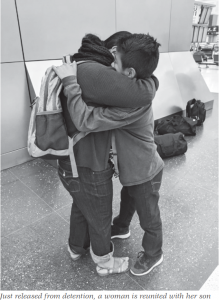