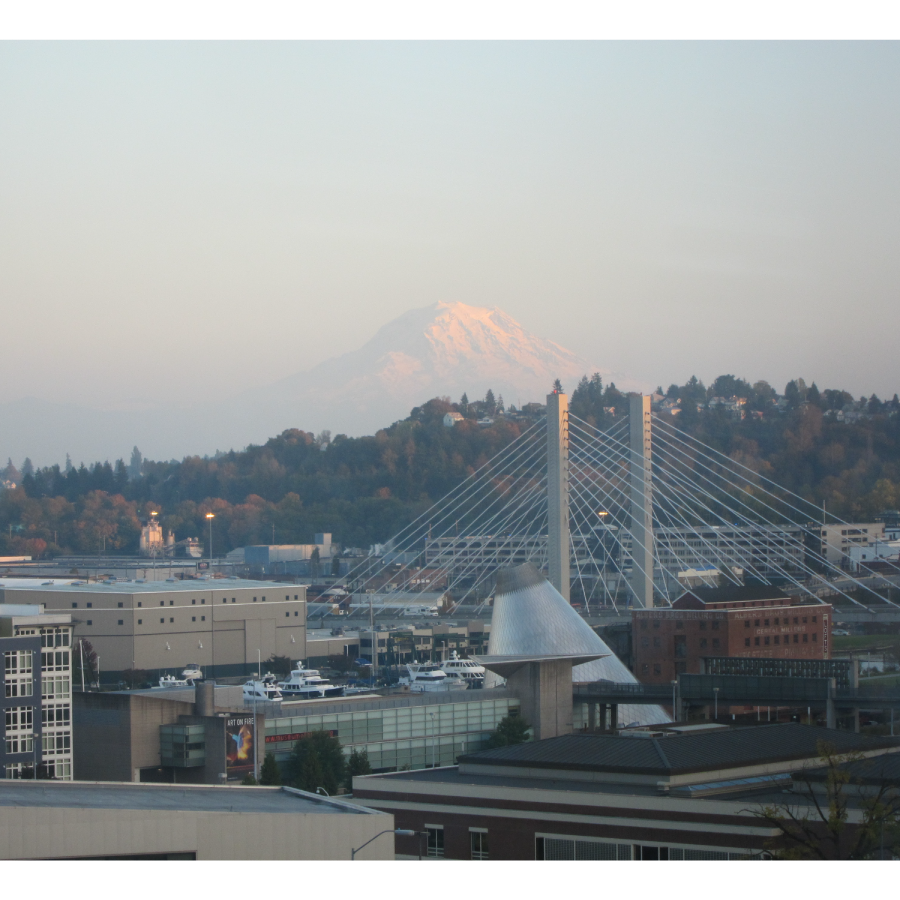 Thursday evening, October 17, 2013 there was a Scoping Hearing concerning the Millennium Coal Terminals proposed for Longview, Washington. The hearing was held at the Tacoma Convention Center. Comments, both written and oral, could be addressed to representatives of the Washington Department of Ecology and the Cowlitz County Building and Development Department. An observer from the Army Corps of Engineers was also present (they’ve already given their okay). It was the last in a series of hearings held around Washington. I guesstimate that there were probably close to 1,000 people present over the course of the three-hour hearing. A system somewhat reminiscent of a high school football game has developed where proponents of the terminals wear blue and opponents wear red. This made it easy to see that the attendees were about 90% opposed to the terminal.

Those who spoke directly to the two-person panel had two minutes each for their presentations. This time limit was strictly enforced to give the maximum number of people an opportunity. The on-lookers mostly complied with the no-noise rule and that also helped keep the process moving. Those who didn’t win the speakers lottery could give their testimony to a stenographer or fill out a comment sheet.

There were many excellent comments by the “reds”—some narrow and science-based, some looking at the broadest possible effects, some from children, some from elders, some from elected officials, some from Tacoma, some from Longview, some from Seattle, and some very excellent presentations by your fellow Olympians. They added up to a very impressive out-pouring of public sentiment, science, and skepticism. The goal of the comments was to have the state and county reviewers take into account the broadest possible scope of the effects of aiding and abetting the coal industry: the mines, the miners, the coal trains, the coal dust, the infrastructure upgrades (95% to be paid by local jurisdictions), air pollution, water pollution and acidification, marine life destruction, fisheries destruction, job loss in the 42,000 Washington jobs in fishing and related fields; from the depths of the sea to the sky above, all put at risk by coal.

I particularly wanted to hear the comments of the “blue shirts” who wanted the scope to be only the terminals themselves, nothing before and nothing after. The testimony I heard—whether it was from elected officials, Chamber of Commerce representatives, union representatives, or anyone else—was based on a very narrow focus indeed: jobs. It was pointed out that the unemployment rate in Longview is higher than the State average, but pretty much anywhere “jobs” is a hard-to-resist call. The interesting thing to me was that the only jobs I heard about were temporary construction jobs building the terminals. The union speakers were generally from the construction trades (the only exception I remember was railroading) and not from the Longview area. The figure of 1,400 construction jobs was mentioned. Nothing was said about how many of those would be “good-paying union jobs” and how many might actually go to actual Longview residents. More notable, nothing was said about how many jobs there would be running the terminals after the construction workers packed up and went home and whether they would be union jobs or perhaps contracted out to the lowest bidder as so much work is. I heard no argument stating that the “no’s” were wrong in thinking that coal-burning is a leading cause of climate change just that well, China would get coal from somewhere anyway so it might as well be ours that ups the global CO2 level and sends pollution back to Washington on the prevailing winds. Don’t these folks have children? It’s a little uncomfortable to be arguing against unions, but no one is right (or wrong) all the time.

Oh wait, there was another very pressing point made as to why these coal terminals are necessary. How could I have forgotten? One prescient military mind (Ret.) predicted that “denying” US coal to China would lead to war and that the dredging at Longview harbor necessary to accommodate the very large and heavy ships needed for coal transport would have a secondary benefit of making the port ready for military transport ships. Taking arms to the forces repelling China’s attacks over the denial of coal?

On another front it is possible that all the above was unnecessary because, just like the US, China is moving away from coal (and with greater vigor than the US) and the two companies who are seeking to build the terminals, Arch (US) and Ambre (Aus.) may be terminal themselves as their stock prices sink and the interest rates they pay rise.

Little old Longview is a battleground in the central struggle of our time and you can be proud of the Climate Champions of Olympia who represented you there: Mayor Steven Buxbaum, Bourtai Hargrove, Dr. Evan Hirsch, Robert Whitlock, and more.

The author, who wishes to remain anonymous, is, as she wrote,“another little old lady for a harmonious and livable planet who lives in West Olympia and supports the work of Olympia Fellowship of Reconciliation Climate Crisis Group.”

Next:
http://www.youtube.com/watch?v=BON9PaErYFU Beginning, Wednesday, November 6 and continuing the first Wednesday…