The extrajudicial execution of Michael Reinoehl

“There has to be retribution”

Washington police deprived Michael Reinoehl of two crucial rights, the right to a fair trial and the right to be alive. By killing Reinoehl, the police took on the role of judge, jury and executioner. This illegal role, which has been particularly directed against black citizens after the killing of George Floyd, precipitated over 100 days of rage-filled protests across the country. These demonstrate a growing unity in America against racism and police brutality. Popular discontent has engulfed the US, the West Coast and Portland, Oregon, in particular. 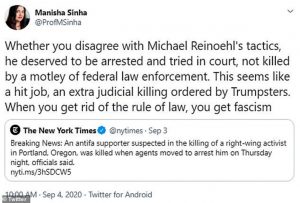 The superimposed media narrative, always ready to ignore the essence of events, has focused primarily on petty looting, minor property destruction, the metaphor of violence with fireworks, and a supposed “woke” irrationality flooding the streets. At the same time, it ignores the long ‘irrationality’ of racism, police viciousness and the open presence of right-wing paramilitary groups, as well as unidentified government security units terrorizing citizens.

Reinhoel’s recent execution at the hands of US law enforcement reveals the political and cultural bedrock of the police for what it is—an institution of indisputable bigotry and oppression—against which Reinoehl revolted, and for which he was gunned down.

By killing Reinoehl, the police took on the role of judge, jury and executioner.

In July, federal forces were deployed to Oregon’s largest city, where they kidnapped activists and assisted local cops in brutalizing an outpouring of diverse and committed community members standing in solidarity with Black Lives. Michael Reinoehl was one of the people involved in these demonstrations, formed around antifascist coalition-building with an intent to reclaim the means of power otherwise monopolized by the state, in order to envision them anew.

On the night of August 29, Aaron Jay Danielson was with a partner prowling the streets of Portland after a day-long “Trump 2020 cruise rally” with people in trucks flying pro-police “thin blue line” flags shooting paint balls, and pepper spraying BLM protestors. As a local activist, Michael Reinoehl had been involved in some of these clashes. Aaron Danielson was a “good friend” and follower of Joey Gibson, founder of the conservative Christian “Patriot Prayer,” a far-right group involved in a number of violent demonstrations.

A cell phone video posted online of a confrontation between Danielson and Reinoehl shows a number of shadowy figures moving in the background, a few muffled voices, and simultaneously, a cloud of mace and a gunshot, and then another loud bang before the body of Danielson stumbles to his death.

In a VICE interview posted five days later, Reinoehl admits to the shooting and explains how, as a protester, he and those he was with felt strongly that they were in “immediate danger” as the two, apparently armed, Patriot Prayer members stalked the streets at night. During the interview, Reinoehl admits to feeling his life was in grave danger, given the propensity for contemporary fascists and the police to work together to undermine the progressive cause.

Reinoehl’s fear of being hunted down and killed was confirmed on September 3, at an apartment complex in Lacey, Washington where he was ambushed by four officers with the PNW Violent Offenders Task Force and left for dead. The officers were not wearing body cams; at this time there is no known footage of the encounter.

Nathaniel Dingus, an eyewitness to the attack, described seeing an unarmed Reinoehl being shot at by the police as he was walking to his car. He then saw Reinoehl attempt to flee as two SUV cruisers accelerated towards him. Reinhoel was felled in a hail of some 50 bullets, fired instantly, without any command to stop or freeze clearly given. At the time of writing, police said they had not determined whether Reinhoel fired, brandished or even displayed a gun.

The Thurston County coroner has ruled Reinhoel’s death a homicide. The unrestrained, inter-state coalition among Patriot Prayer based in Vancouver, Washington and Oregon fascists, the Portland Police Department, the Washington Police and the US Marshals engenders policies that exonerates them of criminal consequences for their actions, and increase violent social control, so it is not surprising that Reinoehl didn’t make it to trial.

When questioned about the shooting, President Trump responded by saying the marshall’s killing of Reinoehl was “retribution” for Danielson’s death “and that’s the way it has to be.” This came after months of the White House labelling autonomous antifascists as a “domestic terror group.” President Trump had mass-tweeted his condolences on the death of this Patriot Prayer member — a gesture echoing his earlier pro-fascist defense of the 17-year old police supporter who went to a BLM demonstration in Kenosha, Wisconsin where he shot and killed two protestors. The Right’s definition of “Law and Order” that criminalizes all forms of dissent paved the way for Reinoehl’s execution, as it has for many others.

Political violence and murder are not new to America. In fact, they constitute the baptismal water of the nation. Michael Reinoehl’s extrajudicial killing is a loud reminder of the power of our militarized police-state to reinforce the interests of those who rule the economy. The very notion of justice is itself on trial. The police took another life needlessly and will not have to face the consequences.

No court can truly say what Reinoehl deserved for standing his ground in Portland. The question, then, for the Thurston County Sheriff’s Office, which is investigating Reinoehl’s death, is whether it can impartially apply justice without succumbing to the toxic ideology of absolute authority stemming from Trumpian fantasies. The police have always ruled with impunity, knowing that their interests — as members of the repressive apparatus of the state whose main function is to block and suppress social movements —align closely with the values of capitalism, the violent Right and the status quo.

The case of Michael Reinoehl is clear, even if the evidence is incomplete, or is too incendiary to be fully brought to light. Totalitarian white nationalism, embedded in this country’s history, is responsible for the deaths of both Reinoehl and Danielson, and is also what keeps the police a well-funded and well-functioning fixture in society.

Daniel Mootz graduated from The Evergreen State College, and likes the woods, art and travel.

Is our commitment to our system of justice strong enough to resist the current attacks on it?

Retribution is defined as punishment inflicted on someone as vengeance for a wrong or criminal act. The concept comes from ancient times “an eye for an eye” or returning evil for evil.

Retribution is antithetical to our system of law and order. In a system of law and order — one that is more than a campaign slogan — punishment is administered according to established rules and principles. In the United States we cherish these rules and principles: everyone is innocent until proven guilty; everyone is accorded due process; everyone has the right to a trial by jury. In a just system based on law and order punishment comes only after an impartial judgment.

If we accept Mr. Trump and his proposition that “there has to be retribution” we open the door for individuals to settle scores themselves—even individuals who wear police uniforms. President Trump not only praised Reinhoel’s killing as retribution, he also defended a man accused of murdering protestors on the streets of Kenosha; he counts among his supporter’s vigilantes—armed groups who undertake “law enforcement” without legal authority. That’s how death squads operate in other countries.

We’ve already gone some way down the road to accepting retribution instead of justice: police kill a thousand people a year on the street or in their homes. We’ve gone down that road with things like “pre-trial detention,” and “up charging” individuals so they will forego a trial and enter a guilty plea in exchange for a “lesser” sentence. Will we turn back?