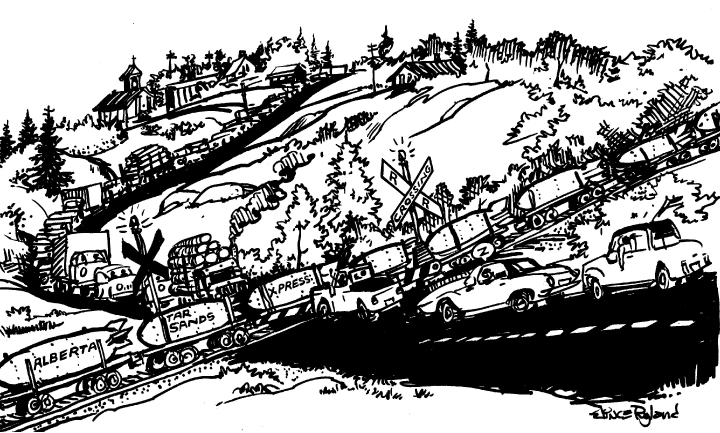 When the Harpers Magazine arrives, it is a family tradition for one member to read off the Index and have the other members guess at the possible answer.  I thought it would be fun to have a Bakken Index. The North Dakota Bakken oil field combines hydraulic fracturing and horizontal drilling. This has produced a new U.S. crude oil boom that wants to come our way on virtual pipelines of 120 car Burlington Northern Sante Fe (BNSF) unit trains.

Rank of North Dakota in the extraction of domestic crude oil: 2

Number of North Dakota counties that currently produce 85% of the Bakken crude oil: 4

Rank of Berkshire Hathaway’s stock price among these 69 Operating companies: 4

Average percentage nationwide for the flaring of natural gas at oil producing wells: 1%

Number of picocuries/gram of radioactive waste allowed to be disposed in N Dakota: 5

Number of radioactive oil socks allowed to be disposed of in North Dakota: 0

Month US Ecology, Inc said part of N Dakota in danger of being a superfund site: March ’14

Decade in which the use of hydraulic fracking in horizontal wells introduced: 1980s

Depth  a production casing at a oil well can extend before turning horizontally: 10,000 feet

Percentage of water and sand in the fracturing fluids injected  into the wells: 98-99.5%

Amount of fracking sand that can be used in a single Bakken well: 1 million pounds or more.

Remaining component of the fracturing fluid is made of what: proprietary chemicals.

In a typical fracturing treatment, what is the number of chemical additives used:  3 to 12

Number of fracking chemicals on Material Safety Data Sheets that must be reported: 0

Number of these products known as human carcinogens or hazardous air pollutants: 650

The percentage of fracking fluid that is returned to the surface as “flowback fluid”: 75%

Port of Olympia 2012 revenue from ceramic proppant shipping for the Bakken: $1.2 million

Number of bags of ceramic proppants offloaded by the Port in February 2014: 7,000

How many years after Warren Buffet visited the Bakken crude oil fields did he buy BNSF: 1

Percentage of the million barrels/day of Bakken crude BNSF plans to ship by rail in 2014: 90%

No. of days North Dakota wheat shipments delayed this winter due to oil train traffic: 40

No. of loaded coal cars derailed on BNSF lines in eastern Montana February 24, 2014: 29

Number of these violations written up: 721

The amount of oil spilled by the rail industry in 2013 alone: 1.15 million gallons of crude

No. of  deaths in Lac-Megantic, Quebec due to July 2013 derailment of Bakken oil: 47

Number of months after this derailment that the MMA railroad declared bankruptcy: 1

Estimated # of months the Lac-Megantic downtown will be closed for restoration: 12

First thing rebuilt after 40 downtown buildings were burned to the ground: railroad line.

Number of hours that this spilled Bakken oil burned near Casselton: 24

Number of tons of oil-tainted dirt hauled away after this spill: 10,000

Year the National Transportation Safety Board raise concerns about these cars: 1991.

Year in which regulations for new tank cars began: 2011.

Number of barrels of crude oil shipped across Washington state in 2013: 17 million barrels

How much will that figure be in 2014 ccording to US Senator Murray: 51 million barrels

How many of Washington’s three east west rails lines are owned by Buffett’s BNSF:   3

Number of trains that run on the North South BNSF track in a 24 hour period: 68

No. of oil trains added if all oil receiving expansion projects in WA are approved: 22/day

Percentage of Washington’s 167 million bushels of wheat in 2011 shipped by rail: 27%

No. of  containers or TEU’s handled by Seattle, Tacoma and Portland in 2009: 3 million

Number of oil trains traveling each day if all three Grays Harbor oil terminals are built: 5

Number of local emergency responders BNSF must advise in advance of shipments: 0

Next:
Olympia’s planning department keeps a constant eye on bringing in…