Some speculations on the far side of the moon 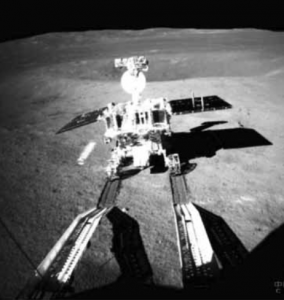 New Year’s Day saw three spectacular events in space exploration: New Horizons fly-by of Ultima Thule; orbital insertion of NASA’s OSIRIS-Rex space probe at Near earth Asteroid Bennu, and China landed the cutest rover ever on the moon’s rural outback.  China had a bountiful year in 2018 with 39 rocket launches, while NASA and all commercial rocket companies in the US combined had only 34. Russia, Europe, India, Japan, and the rest of the world launched 41.

China’s rover,  named “Yutu 2, the Jade Rabbit,” is the most immediately productive mission of the three. The Jade Rabbit is there to measure temperatures, soil chemicals, and cosmic rays; observe space with a radio telescope; observe the sun’s corona; and use China’s own communication relay satellite to communicate with earth. Since NASA is forbidden by Congress to collaborate with China, our Far East neighbors are doing it themselves. NASA is in the picture with its “moon to Mars” program that includes using the moon as a stepping stone to the much bigger prize of Mars.  But China will likely have a base on the moon before NASA.

Many men on the moon?

Colonizing the moon is a difficult proposition. NASA concluded back in the 1970s that it was  simply not worth the cost. Low earth orbit was more strategic at that time. The 50th anniversary of the Apollo 11 moon landing is a moment of great celebration at NASA – but an opportunity was missed. We could have had a thriving Moon City by now.

Aiming for the moon

The economic rewards of that are unclear but the cultural benefits are mind boggling. SpaceX has plans to fly a crew and passengers around the moon for just that reason. The project is called “dearmoon.” Japanese billionaire Yusaku Maezawa is financially backing the project. He wants to send specially chosen artists on the space tourism adventure of a lifetime, so that the artists could share the experience when they return. The plan is to send the first SpaceX “Starship” on the upcoming “Super Heavy” rocket, hopefully within the next five years.

China’s exploration of the moon’s south polar region is a brilliant move. In this area, the Von Karman Crater, in the Aitken Basin shows some of the most interesting geology in our solar system. Water and ice reserves may exist in deep craters, and the mountains have peaks that receive year-round sunlight. This far side of the moon is free of radio chatter from earth and will be a great location for astronomical research.

Will the new “rural China” be the moon?

The surface area of the moon is 37 million square kilometers. A square kilometer is about the size of Priest Point Park. An eventual US colony on the moon might occupy 100 square kilometers. China would be free to claim the rest, equivalent to almost four times their current land mass.  With 1.4 billion people in China now, it must be an enticing prospect for them to grow as a nation.

Colonizing the moon will be also be a dangerous business. Rocket flight and space living has many hazards. For example, China allows rocket stages to separate and fall to earth in populated areas. This is especially terrifying since these contain highly toxic hypergolic fuels.

Needed: an act of Congress

We have been playing the US versus them game far too long. We will all benefit by collaborating with China and their scientists. They are doing amazing things; we have a great deal to learn from one another. It will require an act of Congress to restore relations with the ambitious Chinese National Space Administration. We cooperate with Russia in space; we should be able to cooperate with China.

Russ Frizzell lives in Olympia and graduated from The Evergreen State College in 2013.