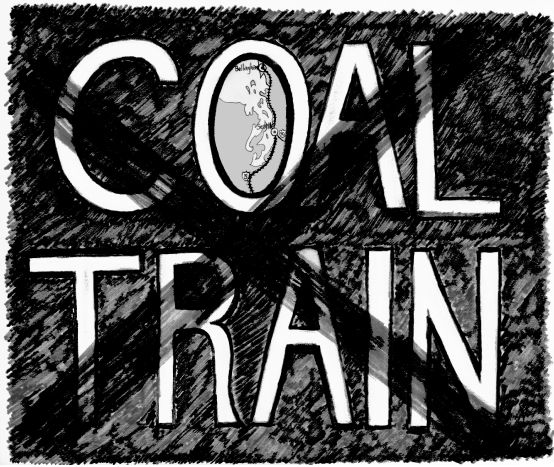 Here’s Burlington Northern’s menu coming to your town on “virtual pipelines” of 100 car unit trains. For your entree: Bakken light, a shale specialty, close enough to gasoline to make it a highly explosive experience for your domestic taste buds.  For your main course:  Alberta heavy, tar sands in origin, but dressed with enough toxic synthetics so you’ll never imagine it’s really asphalt warmed up.

You’ve probably read about it. Derailments, like the one in Quebec on July 6th last year. A runaway train carrying 72 tank cars of Bakken oil from North Dakota left the tracks at 63 mph in the middle of a village called Lac Megantic. The cars exploded, killed 47 people and destroyed 40 buildings. 1.4 million gallons of oil spread over 77 acres, entered the Chaudiere river and flowed 74 miles down stream. The Quebec government estimates a $200 million clean up. The Maine-based owner, the Montreal, Maine and Atlantic (MMA) Railroad, filed bankruptcy.

Oops.  Just an aberration. 2012 was the safest year in rail history, says the Federal Railroad Administration (FRA) with staff sufficient to inspect just 1% of all rail traffic. We’ll get to the bottom of this. It must have been the engineer. With lightning speed, the FRA , just one month after Quebec, issued emergency order number 28! Trains on main lines can’t be left unattended unless railroads submit a plan that says they can be left unattended.

Three months later it was Aliceville, Alabama. In November, thirty tankers in a 90 car unit train full of Bakken oil from North Dakota derailed, exploded, dumped its oil into a wetlands that didn’t burn out for three days. This time two engineers were on board (there goes that argument) going 40 mph on a relatively flat terrain. Damn. What’s up?

Then there was that plume of smoke and fire December 30th  at Casselton, just west of Fargo, North Dakota.  You have probably seen the video.  Bakken oil again. A BNSF oil train headed one way hit a derailed BNSF grain train headed the other way. Eighteen of the 106 cars derailed. Boom. The oil exploded. 400,000 gallons of crude dumped. 2400 residents of Casselton were temporarily evacuated.  9,000 yards of soil have been excavated thus far.

North Dakota is now the second largest oil producing state in the nation, just after Texas.  The Bakken region now produces something like one million barrels per day of light crude, but pipeline capacity is just half of that.  Railroads have picked up the slack. In 2008, rail carried 9,500 carloads of crude but in 2012 that figure rose to 600,000 carloads, according to the Association of American Railroads. It now estimates that 70% of Bakken oil is moved by rail.

What does that mean for Washington State?

Burlington Northern (BNSF) and major oil companies, Tesoro, BP, Phillips, Shell and others, have big plans for us.  They propose to increase rail receiving capacity at the five existing refineries, 2 at Ferndale, 2 at Anacortes and 1 at Tacoma. They want to construct trans-shipment facilities where oil is transferred to marine vessels at the ports of Vancouver and Grays Harbor.  The Sightline Institute, based in Seattle, estimates  that if all these projects came into being, it would mean an estimated 21 unit trains of oil per day running from Vancouver to Ferndale with handling capacity of 756,300 barrels of oil per day.

But all that oil wouldn’t be from Bakken.  This is where your main course comes in: Alberta tar sands.  Whether you call it tar sands or oil sands products there is a lot of it; and even after Obama approves the XL part of the Keystone pipeline, some of it will be headed this way, most likely by rail.

Alberta, that’s the province just east of British Columbia, has an estimated total reserves of 170 billion barrels of oil.  What these reserves have is bitumen, a crude that’s heavier than water. You get to it by surface mining or injecting steam down a well. Once extracted, the bitumen is too thick to move so you dilute with chemicals so it will flow in a pipeline.

Why is Alberta’s heavy crude bitumen is headed this way?

The majority of Canada’s oil is exported to the US by pipeline, but between 2007 and 2012, rail transport increased by 7000% yearly. In addition, Trans-Canada, the Keystone XL pipeline proponent, is considering rail and not just because the XL has been slowed down in the US.  Native bands  in British Columbia are dead set against new and expanded pipelines crossing their land to export terminals in Burnaby, Prince Rupert and Kitimat. Railroads to these ports already exist. Plus, Alberta oil producers are moving toward eliminating the costs of diluting the crude by ordering heated oil tankers that can haul the bitumen undiluted.

Also a March 2013 US State Department study estimated that with some modest expansion and upgrades, “railroad networks in the US could handle all new oil produced in Western Canada through 2030.” Here at home, the State Department of Ecology is getting ready. They organized a two day workshop in April, 2013, to learn about Alberta oil sands. As part of the workshop, they played out a train derailment with a bitumen spill along the Columbia river. Finally, Canada, unlike the US, does not have a ban on the export of its oil to overseas markets.

As different as they are, Alberta’s heavy crude and Bakken’s light have some things in common when its comes to rail transportation. They come on rail lines that are secretive, ill-prepared and un-regulated. These rail lines carry cars that have been known for years to be dangerous and they carry hazardous materials that are either poorly labeled or mis-labeled.

These crudes come on tracks and trains owned by Warren Buffett whose Berkshire Hathaway bought BNSF in 2009 for $26 billion one year after Warren visited the Bakken “play.” BNSF owns and operates the most rail mileage in our state, the north south line and all three east-west lines that converge in Spokane.  This railroad is not subject to State regulation. No state agency knows the number, timing or content of these 100 car unit trains moving through our towns.  BNSF’s spill response plans are proprietary and not shared with the public.

Plus, the rail system in Washington is simply not ready for such traffic. A State Transportation study said our rail system was nearing capacity with strained service quality and rail rates increasing for businesses in 2007. Six years ago.  These lines also have defective rail crossings.  BNSF was fined $105,000 in February 2013 for failing to remedy seven defective rail crossings over a substantial amount of time in counties that now want to expand their oil by rail capacity.

These hazardous crude oils will also come on oil tanker cars called DOT 111s. These are the cars that blew up in Quebec, Alabama and North Dakota. Since 1991, the National Transportation Safety Board (NTSB) has said that these cars are defective with sidewalls that puncture and values that break open. A former Board NTSB Board member said even if this car doesn’t crumble in derailment, “66% of the cars are going to spill whatever product is in there.”  But the NTSB sends recommendations to a Federal Railroad Administration that has no regulation to remove old cars from the rail. And, remember, retrofitting these cars would cost an estimated $1 billion dollars which would hurt that nice billionaire Warren Buffett’s bottom line. What does this all mean? About 85% of the 92,000 cars remain DOT 111s.

These hazardous crude oils will also come in rail tankers with a designation of “crude oil.”  For first responders and the public in general, this does not tell them whether they are dealing with an explosive Bakken crude or a  heavy Alberta bitumen diluted with a natural gas condensate or synthetic fuels. There is no federal regulation that says that designation must be more specific and BNSF says they are prepared for any accidents so there is no need for the public to know their plans.

But the public does need and want to know.

Because the proposed oil terminal at the Port of Vancouver is so large, it comes under the purview of the Energy Facilities Site Evaluation Council.  Thanks to the mobilization by the Columbia Riverkeeper, the Sierra Club and others, the Council received over 31,000 comments by December, 2013. These comments are now being summarized and a full Environmental Impact Statement (EIS) will be ordered. The  final decision-maker on this proposed terminal will be Governor Inslee.

Keep in mind that Tesoro, the oil company promoting the Vancouver scheme, is responsible for one of the largest oil spills (20,600 barrels) in North Dakota history just last September. I mean this company was so out to lunch they didn’t know their own pipeline was leaking until a farmer found oil flooding his wheat field. Closer to home, Tesoro’s  Anacortes refinery killed seven workers in 2010, which, according to a recently released US Chemical Safety Board report, “could have been prevented” if safer equipment had been used.

The two proposed oil transfer terminals at the Port of Grays Harbor by Westway Terminals and Imperium Terminal Services were granted go ahead permits by the City of Hoquiam and the State Department of Ecology. However, an alliance of the Quinault Nation, Friends of Grays Harbor and other groups had these permits overturned by the Shoreline Hearings Board in November, 2013 and now the issue is headed for either Superior Court or the Court of Appeals. Both Westway and Imperium are now asking the Department of Ecology for a full EIS.

Shell has a refinery on March Point at Anacortes. It wants to accept one 100 car unit train of Bakken light crude in and out per day at a new offloading facility.   The Skagit County planning office set a February 17th deadline for comment.

Organizers in Whatcom County are also asking their County Executive to withdraw their “determinations of non-significance” that allows crude oil trains to terminals at the Cherry Point (Ferndale) refineries. They want a full environmental review.

Many of the opponents of these new oil terminals and expanded rail receiving capacity at the five refineries are calling for a moratorium on oil shipments so that a “programmatic” EIS could be conducted. Such an EIS would assess the cumulative effect of all the proposed expansions on Washington state and its citizens.

The State Legislature is also getting interested. The Spokane City Council president told a legislative committee that “we’re in a situation where our town would be split in half if there was a derailment.” Seattle State Representative Jessyn Farrell has proposed House Bill 2347 which is intended, among other things, to compile information on oil train traffic, something the BNSF refuses to make public.

Perhaps Cager Clabaugh said it best.  He is the President of the Longshore (ILWU) local at the Port of Vancouver and is opposed to the proposed Tesoro oil terminal.  “We don’t believe in jobs at any cost. The reward is just not worth the risk. One accident will put us out of work.  It will put thousands of people out of work.”

Dan Leahy is a Westside resident and proud member of the Decatur Raiders.

Next:
If we are to discuss science, then I must be…