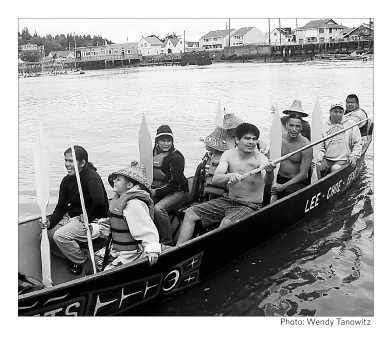 A day to strengthen opposition to ecocidal project

On July 8, the Quinault Indian Nation organized a canoe and kayak flotilla that landed at the Hoquiam River above where it empties into Grays Harbor Bay. The day’s activities served to strengthen and mobilize opposition to the proposed expansion of an oil storage terminal (“tank farm”) in Hoquiam by Westway Terminal Company. Westway currently operates a bulk oil terminal at the Port of Grays Harbor, and is proposing an expansion to receive about 50,000 barrels of crude oil per day from train shipments—oil that would then be loaded onto ships for export to Asia. Two proposals for new crude oil terminals in Grays Harbor have already been defeated. The decision on whether to issue a permit for an expansion (“retrofit”) of the oil terminal rests with two co-lead agencies: the Washington Department of Ecology and the City of Hoquiam. The period for public comment has closed.

The flotilla was followed with a native drumming and chanting circle and a march to Hoquiam City Hall for a rally with speakers, including local officials and members of the Quinault, Quileute, Sami, Makah and Lummi nations.

Adding to the no-brainer for denying this permit is the fact that Grays Harbor National Wildlife Refuge (GHNWR) is located in the 20-mile shallow waterway that would be traversed by huge ships hauling crude oil for shipment to Asia. GHNWR is one of four major staging areas for migrating shorebirds in the Pacific Flyway. Hundreds of thousands of shorebirds gather here in spring and fall to feed and rest. In the event of an oil spill, the journey of these migrants and their ability to feed would be foreclosed.

With this and dozens of other reasons for the permit to be denied, where is the benefit? The very few beneficiaries of such a potentially-catastrophic fossil fuel enterprise downplay all the risks and pump up—with misleading and false  statistics—the creation of “good-paying jobs.” Attorney Fawn Sharp, President of the Quinault Indian Nation, has the facts: “We commissioned an economic study and concluded about 10,000 jobs are at risk … tribal and non-tribal fishermen and tourism-related [jobs] are in jeopardy.”

Learning about climate change and its myriad faces has led Wendy to looking into the Pandora’s Box of fossil fuel dependence, extraction and transportation. She feels that, since all politics is local, we have a chance to stop at least some of these ecocidal projects.