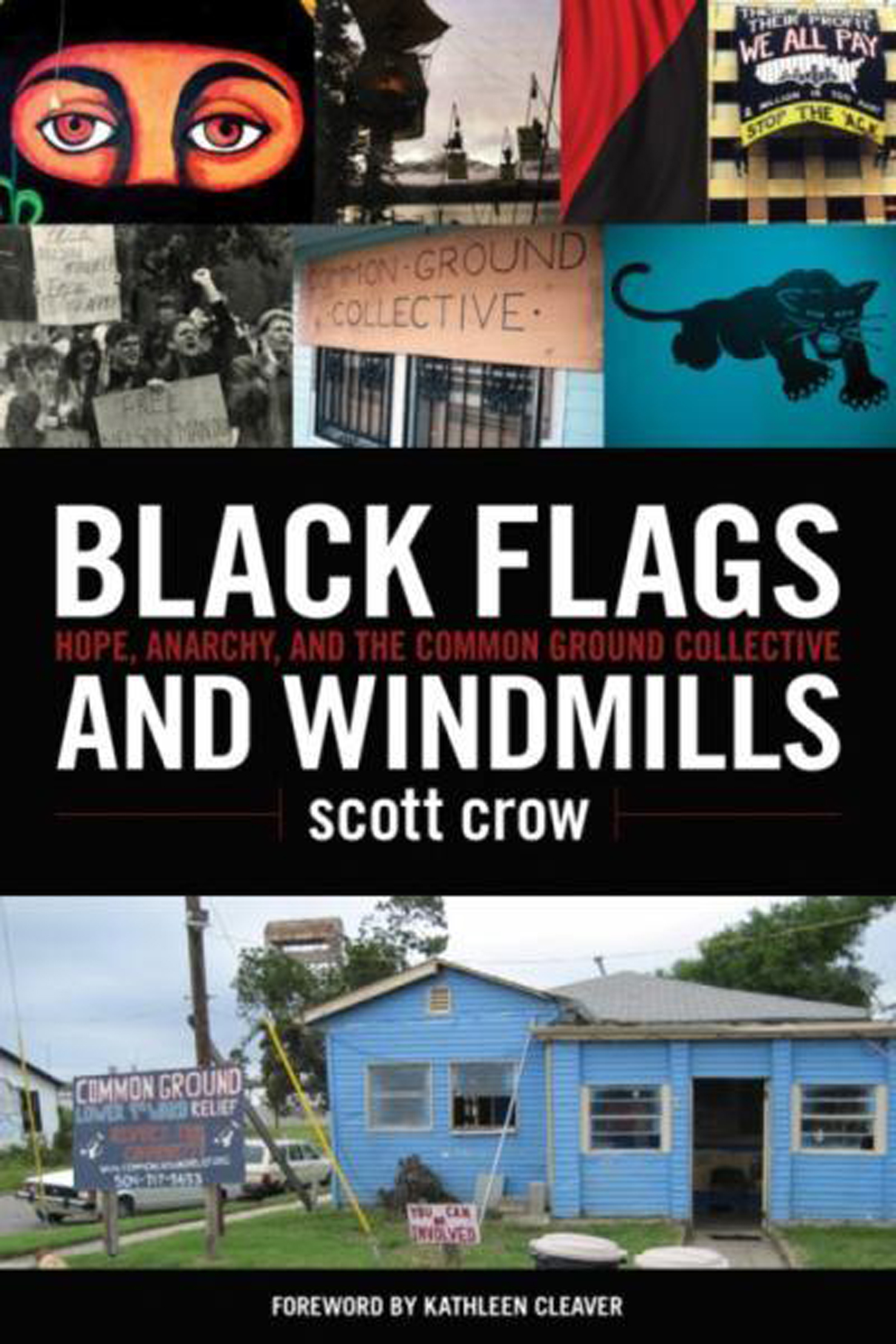 Before reading this book I could not appreciate the scope of the natural disaster which was Hurricane Katrina. Although I was paying attention, the sketchy reports on the evening news and rumors and gossip did not do justice to what really happened in September 2005 in New Orleans. The last weekend of October this year Olympia played host to Scott Crow as he continues to travel about the US introducing his new book: Black Flags and Windmills. (Special thanks to BRICK of Sound Puget Sound Community College (SPSCC) and Free Radio Olympia for arranging Scott’s visit.) Scott made three presentations of this terrific story especially focusing on the community organizing aspect of his work. I caught up with Scott at the Free Radio Olympia waffle breakfast fundraiser and was fortunate enough to have an extended conversation with Scott.

Scott described to me his hectic speaking tour. He said he really enjoys visiting Olympia again especially his friends at Free Radio Olympia. Also he informed me that he has plans to write several more books. He has great hopes that worker co-ops can greatly improve the lives of people right now.

On Thursday, October 25, Scott spoke at SPSCC, October 26 at Last Word Books, and October 29 at The Evergreen State College. Black Flags and Windmills is the story of events and people who made a real difference for the survivors of the hurricane and subsequent human rights catastrophe. And just to punctuate the events, Hurricane Sandy devastated the East Coast while Scott was in town telling of his experience!

At first glance the story seems outlandish, but do not judge to soon. During the years 2000 through 2010 when I became an activist living in Dallas Texas, my wife Stephanie and I participated in many of the same actions with Scott and learned to admire his deliberate style. These times were especially vital to my growth and the experiences taught me that we can take action when action is called for.

Scott describes in these pages how he came to be involved in New Orleans in the aftermath of Hurricane Karina. His role as cofounder of the Common Ground Collective changed the way events would unfold because as he writes, “ordinary people compelled to act for justice in an extraordinary situation.” While there Scott was required to stand up to the authorities and the vigilantes while both rained down terror on local minority communities. Then he and other volunteers went door-to-door delivering services such as first aid and food to devastated residents. But most importantly, the “solidarity not charity” of the Common Ground Collective enabled residents to join together in rebuilding their own community. These ordinary people whose love and dedication to their community acted to salvage that community while within the bounds of the disaster. These actors and their individual actions are well told; from daring standoffs to long term planning, to simply “taking out the garbage” Scott has illuminated these untold events.

While the authorities and Red Cross stood by and blocked entry to aid volunteers Scott crossed into New Orleans. Because of his example and the obvious need, tens of thousands of volunteers came to Common Ground to learn how people make a difference.

In September 2005 I was active in Veterans for Peace at Camp Casey. I remember loading trucks with relief supplies for Common Ground, which Camp Casey had in abundance. I was also close to Scott’s mentor Gene from whom I learned how all these events are tied together. Because of Scotts close lifelong involvement with ex-Black Panthers and his willingness to do what was right these events transpired. I knew Scott from attending UPROAR actions and Radical Enquantro training camps. The first hand record finally discloses how the Common Ground developed from desperate need to eventually become a legal nonprofit. Beginning as the “largest functioning organization based on anarchist ideals in the US since the Industrial Workers of the World,” (pg. 159). The guidelines of respect as an example, the attempt at horizontal power structure, all these events made history.

Let us hope disaster never strikes our community this way. Where tragedy does occur we should be prepared to respond in creative ways. Black Flags and Windmills tells how one group responded, and how we can learn from history.

Russ Frizzell lives in Olympia and is studying science education at The Evergreen State College. He and his wife Stephanie are active on human rights and animal rights, and their son Jules attends Rising Tide School.

Next:
It’s a dark, drizzly mid-October night in Olympia, Washington—the…