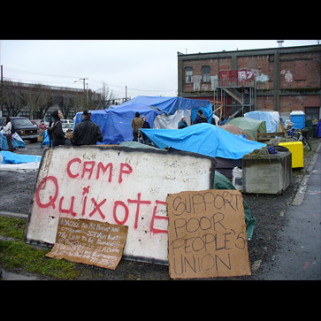 Retrospective on the creation of Camp Quixote

In the fall of 2006, I had been a live-in volunteer at Bread & Roses in Olympia, Washington for about three years. That’s three years of experiencing and witnessing the direct effects of homelessness in the lives of people whom I had come to care for and love. Daily, they were tormented by predators, police, and policies – all things compounding to make it nearly impossible to recover from the cycle of homelessness. One co-worker described it as “being stuck on the side of the freeway, trying to pull into traffic, but cars keep whipping by, leaving you stuck where you’re at.” Resources were scarce and getting scarcer. Politics in Olympia had shifted toward a very pro-business/anti-homeless track. Getting rid of homeless people was the goal, as opposed to helping them to get off of the streets. This trend culminated in the summer of 2006 in the form of a Pedestrian Interference Ordinance that would strip people’s right to gather in public spaces – namely, our sidewalks – during certain times of day.

Next:
December is wet and bone-chilling in Seattle. So, imagine climbing…