Rachid Benkhalti was born in Marrakesh, Morocco, on September 4, 1955. He passed away at home in Olympia on November 27, 2020. We have lost a great soul, father, brother, uncle, and so much more. Rachid was a man of great spirit, with a ready smile and generosity. His zest for life was a magnet to those who knew him. He wanted to discover the world. 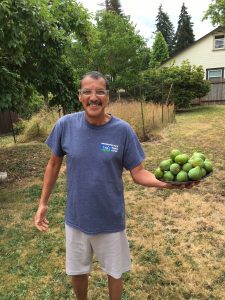 A friend said he was the “essence of warmth and generosity.” This was Rachid Benkhalti.

Rachid was the son of Rquia Jarari and the late Ahmed Benkhalti. He grew up with his brother, Abdellah and his four sisters, Najia, Aicha, Souad and Fatima. He attended his neighborhood school and Abou El Abbas Sebti High School, graduating in science and mathematics.

His older brother Abdellah recalls that growing up, Rachid had several passions. He was known for collecting and cherishing old Moroccan music, playing soccer, entering cooking competitions and hanging out with his immediate and extended family. He carried these passions and shared them with others throughout this life. As Abdellah wrote, these passions made Rachid “a very social person” who knew the importance and joy of family and camaraderie.

Later, a tourist in the US once asked Rachid, “So, what is it that you do?” Rachid replied, “Me? I enjoy life.”

After completing high school, Rachid worked in the vineyards of Lyon, France, where he met his life-long friend Driss Bouabdillah. They both entered University in the French town of Pau in 1980.

They shared an apartment with others who became lifelong friends: Said Fettahi, Pascale Pere, Azzedine Dahlane. As Driss wrote, their apartment was the gathering place for social and cultural events, as well as political discussions. They were all members of the National Union of Moroccan Students, through which they organized travel for students and helped bring Moroccan artists and musicians to concerts.

It was here too that Rachid fell in love with Fanny Cordero. They would marry in 1986 and, as Rachid’s friend Mark Bean said recently, become parents of “Ahmed and Salima, two wonderful contributions to humanity.”

Besides his teaching duties at PLU, Rachid served as chair of the Mathematics Department for eleven years, participated in the curriculum, diversity and faculty evaluation committees, published numerous journal articles with his colleague Khalil Ezzinbi in the field of differential and integral equations, wrote a textbook for Differential Equations in French, and received the Faculty Excellence in Scholarship Award.

In 1994 he received a Fulbright Scholarship and helped organize the Second Marrakech International Conference on Differential Equations. Dedicated to his students, he also coached many Putnam Intercollegiate Mathematics Competitions. These competitions, in pure and applied mathematics, provided intellectual challenges that many found exciting and beneficial.

Many of his PLU colleagues wrote about Rachid’s support for other faculty members, his “upbeat nature, his passionate discussions about university and department policies and his sense of humor in difficult times.” One colleague wrote that “he would look you in the eye and even in just a few seconds with him, you could feel loved, cared for, and valued.”

Another colleague confided in Rachid that he felt self-conscious having to shave his head when he received a cancer diagnosis. “The next day,” he wrote, “Rachid had also shaved his head in solidarity with me.” All of his colleagues wrote about his Moroccan cooking and meals in his home with Fanny and the kids.

Rachid carried his love for soccer with him when he came to the US. In Olympia, he joined a soccer club and played year round. He traveled with the team to Vegas and Hawaii in the winter and to Victoria, Portland and Snohomish in the summer. He was the team leader, wrote Stu Simpson, “He was the glue, dominating the midfield with his control and wizardry, feeding the ball to his teammates” and “letting the ball do the work.”

Stu also wrote that Rachid “always wanted to get together for an after-game ‘beer and pizza.’” Often these after-game gatherings took place at Rachid’s local pub, the Westside Tavern where, over the years, Rachid slowly introduced the world of soccer to the tavern’s many patrons.

Two weeks before his passing, Rachid was playing soccer with his team. His teammate Mo described how “Rachid was like tip toeing up the left side of the field and managed to collect the ball so beautifully and two steps later he would strike a very hard hit to the ball using his left foot. We all witnessed it curling in.” He didn’t miss that last goal, but we’ll all miss him.

Rachid Benkhalti died of a heart attack in his home. He was buried in Olympia’s Forest Cemetery on Pacific Avenue on Tuesday, December 1, 2020 surrounded by his family and friends while others, including many in Morocco, France, and Canada, participated online.

He is survived by his two children, Ahmed and Salima, his mother Rquia Jarari and siblings Fatima, Abdellah, Najia, Souad and Aisha; nieces Maria, Zineb, Rita, Soukaina, Leila, Sofia, Bedra, and nephews Mehdi, Omar and Khalid; his companion Jamila; numerous cousins in France, Canada, and Morocco. His family, friends, the PLU community and soccer community mourn his loss. He left too soon. Memories can be sent to: https://rachidbenkhalti.com