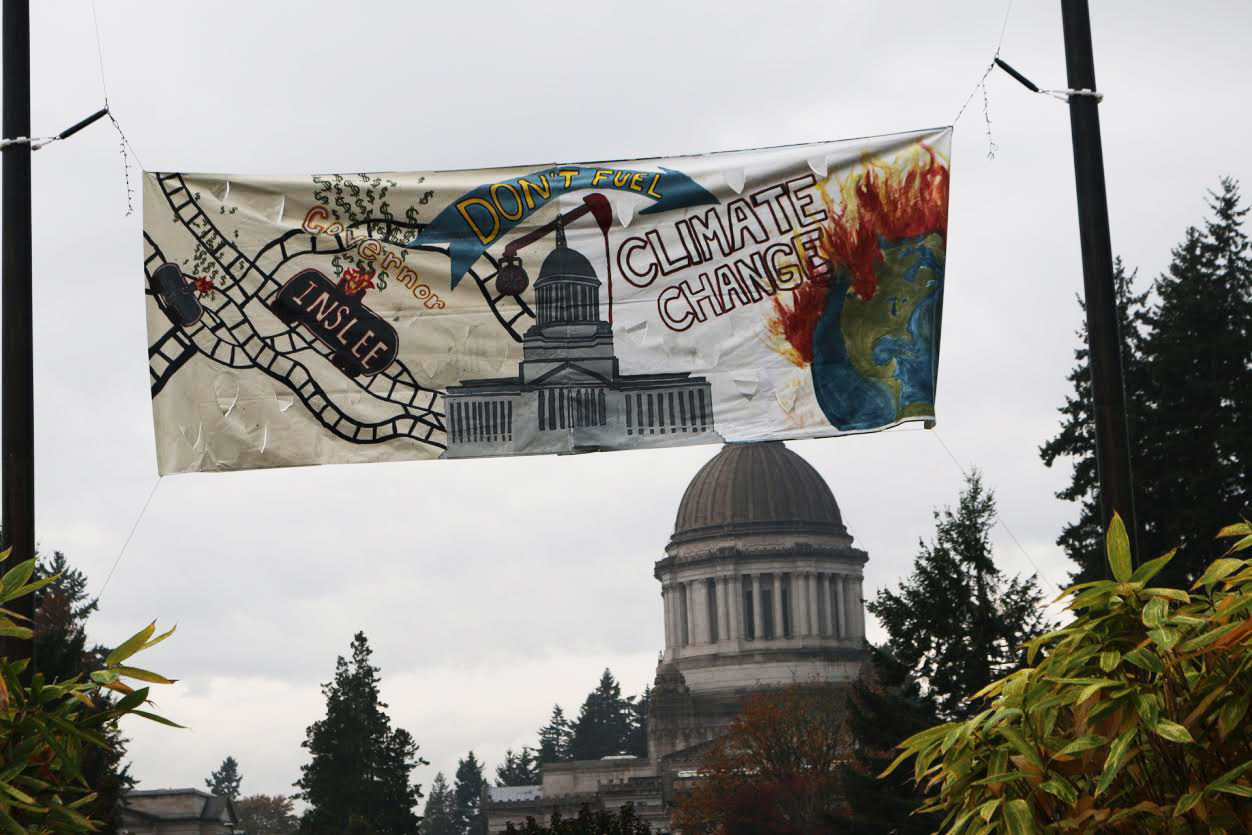 When I was growing up, the Thanksgiving holiday meant that my family got together with aunts and uncles, cousins and grandparents from all limbs of the family tree to eat turkey and mashed potatoes and cranberry sauce and pie. At some point in the increasingly rowdy conversations, a solemn adult would interject the plea that we all pause and consider what we were thankful for.

This November, three events occurred for which I am grateful. They offer a glimmer of hope that we may act collectively to address global climate change and reduce the rate at which carbon dioxide emissions are accumulating in our atmosphere—just a glimmer, not enough to celebrate, but enough to pause and say, okay. We might pull this off.

On November 12, 2014, the presidents of the two countries that are the biggest contributors to climate change announced a deal to limit carbon dioxide emissions. By 2025, the U.S. aims to reduce its emissions 26 to 28 percent below the level of emissions in 2005. China set the goal of getting 20 percent of its energy from non-fossil fuel sources by 2030, and of having 2030 be the peak year for carbon dioxide emissions. Both these moves are not enough and also precedent setting. Meanwhile, the European Union reached an agreement to cut its carbon dioxide emissions 40 percent below the levels set in 1990, and to achieve this reduction by 2030. That means, as Jeff Spross reported on the website Climate Progress on November 12, the world’s three biggest carbon dioxide emitters have “gone on record with new commitments to get their greenhouse gas emissions under control.”

Should we be pleased with this turn of events? Paul Krugman, the often pessimistic and solidly liberal columnist for the New York Times says yes. Krugman’s op-ed piece on November 14 outlines why the agreement between China and the United States is a big deal. First, he says, consider the context. Fossil-fuel interests and “their loyal servants,” which is how Krugman characterizes the entire Republican Party today, have erected a deep defense against any action to save the planet.

Their first line of defense is denial. Climate change isn’t real. Senator James Inhofe, the likely chair of the Senate Environment and Public Works Committee, is an outspoken proponent of this view, and also the recipient of more than a 1.5 million dollars from the oil and coal industries. In spite of the rich funding, arguing that climate change is a hoax perpetuated on the public by money grubbing scientists is losing its luster: a Pew Research study released last summer found that 67 percent of people in the U.S. believe that climate change is real.

According to Krugman, the second line of defense against taking steps necessary to save the planet is the argument that the economy will suffer. If we reduce carbon dioxide emissions, jobs will be lost and economic growth will sputter to a standstill. A version of this argument is central in the debate in Washington State about whether (and how) to put a price on carbon emissions—more on that later. The truth, Krugman argues, that is putting a price on carbon emissions will affect some businesses—any form of a “polluter-pay” policy is intended to shift the cost of polluting back to the producer. The alternative is for all of us to pay for the cost of pollution, leaving the polluter to count their profits and move on. Shifting costs of pollution back to the polluter changes profit margins; it doesn’t cost jobs and it doesn’t halt economic growth.

The third line of defense guarding us from taking action to reduce carbon emissions is that it’s pointless to act if the other big polluter, namely China, won’t. But now China will. The targets are too low, and too soft; however, this is the first time China has agreed to participate in an international climate agreement—and that’s a good step.

Krugman’s analysis of the U.S./China agreement is good in that it dismantles the arguments for ignoring climate change. Bill McKibben, co-founder of 350.org (which reminds us of the need to reduce carbon dioxide in the atmosphere from current levels of 400 parts per million to 350 parts per million in order to preserve a liveable planet), makes an even better case that the two presidents acted because of political pressure—pressure from activists. McKibben points out that this agreement comes at a time of growing unrest in China about the terrible air quality in cities, and just seven weeks after after the largest global climate demonstrations in history. In other words, as McKibben writes, “movements work.” In the spirit of being grateful, thanks to everyone who participated in demonstrations, called their Congress members, supported 350.org and other organizations, and wrote and talked and shouted and marched to say—business as usual won’t cut it. Reduce carbon emissions now.

Governor Inslee’s Executive Order 14-04, issued in April 2014, established the the Carbon Emissions Reduction Taskforce (CERT) that was charged with providing recommendations for designing a carbon emissions reduction program. On November 14, they released their report, organized around four findings:

Either approach can work; whichever is implemented needs to be carried out in a thoughtful way and consequently, both approaches require further analysis;

The only way that Washington State can reach its carbon emissions limits is by developing a “harmonized” set of policies, particularly in terms of the transportation sector, which is the largest source of carbon emissions in the state. (In other words, reducing carbon emissions from transportation requires a mix of strategies, from land-use planning to transit development, that keep the diverse needs of WA residents, including low-income and rural communities, in mind.);

So far, there’s not that much to be grateful for. However, at the end of this 38-page report, an avid reader can find letters from individual members who served on the CERT. Reading these letters is instructive and, for the most part, heartening.

J. Perry England, Vice President of Building Performance at McDonald Miller writes that, “Price is key. We cannot fully unleash our innovative potential if we continue to allow unmitigated carbon pollution for free.” As a business owner, England wants the state to put a price on carbon.

Jeff Johnson, President of the Washington State Labor Council, ALF-CIO, also wants a price on carbon. Johnson writes that “the impact of climate disaster, while bad for everyone, will fall disproportionately on the poor and communities of color, the very people who will be least able to afford the cost of transitioning to a new energy economy.” Consequently, he argues, in addition to establishing a price on carbon, the state should set up an “Economic Justice and Environmental Equity Board” made up of representatives from highly impacted communities (low-income, communities of color, front line workers in fossil fuel dependent communities) around the state who will monitor carbon emissions reduction strategies and make recommendations about investing carbon revenues so as to maximize equity, job creation, positive health outcomes, and further carbon emission reductions.

Renee Klein, President & CEO of the American Lung Association for the Mountain Pacific similarly focuses on issues of health. The reason to act, she writes, is to protect human health. She outlines current threats to health created by changes in our climate, and points out that the elderly, pregnant women, low-income and minority communities, people with chronic illnesses, and children are most vulnerable.

Other letters are equally eloquent, making the case that not acting—not putting a price on carbon—is unacceptable because it’s immoral. As Rick Stolz, Executive Director of OneAmerica writes, “we are united by a deeply felt urgency to take immediate action to reduce carbon emissions in ways that address social. Economic, health, and food justice.”

Governor Inslee faces Republican opposition that will take this form: reducing carbon emissions will hurt Washington’s economy—the same argument Paul Krugman identified at a national level, the second level of defense once the argument that climate change is a hoax has been dismantled. Lots of work remains to be done to get us past the “do more research” mode and into the effective action mode. Still, I’m grateful for those in our state, including the fore mentioned members of the CERT, for pushing forward in demanding the state meet its carbon emissions reduction goals.

The same week that CERT delivered its report the Senate took up the issue of whether to approve the Keystone Pipeline. The vote to approve the pipeline didn’t carry—60 votes were needed, and pipeline supporters only got 59. The 59 senators voting for the pipeline included all 45 Republican senators along with 14 Democrats. Forty-one senators voted against the pipeline: 39 Democrats and two Independents, Bernie Sanders from Vermont and Angus King from Maine. Mitch McConnell, soon to become leader of the Senate, threatened to bring the issue back for another vote in January, when the number of Republican Senators will increase. A veto from the president is not a sure thing. Ashley Parker and Cora Davenport, writing for the New York Times on November 18, 2014, conclude their report on the Senate vote with this cautionary note: “People familiar with the president’s thinking say that in 2015, he might use Keystone as a bargaining chip: He could offer Republicans approval of it in exchange for approval of one of his policies.”

We have a lot of work to do to topple the tyranny of the fossil fuel industry and the stranglehold it has on our political system and consequently on our future. I’m glad for a pause, a moment of hope, and grateful to everyone, everywhere, who works on making our political representatives more representative of us, the people. Let’s keep at it.

Emily Lardner teaches at The Evergreen State College and co-directs The Washington Center for Improving Undergraduate Education, a public service of the college.

Next:
This poem is for the drug addicts the dope fiends.…